Big, awkward and beautiful. Those are three adjectives. They also happen to describe the iPhone 6 Plus perfectly.

It seems very clear that our communication devices are turning into something different. I’m not happy about it but I’m also willing to accept that I may not represent the rest of the market.

Against my better judgment and personal bias I purchased a 6 Plus. This is a summary of what I like and hate about the device. 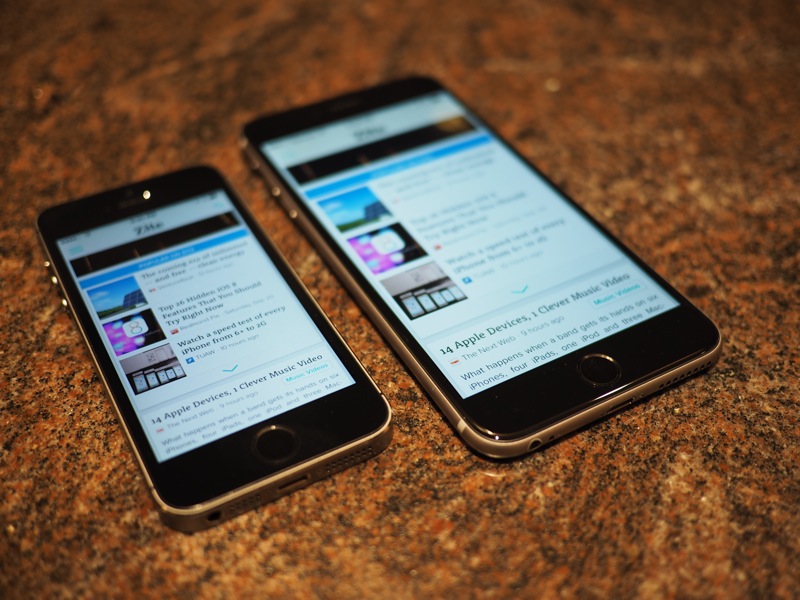 I’m a large guy and can palm a basketball. I can not reach my thumb across the 6 Plus easily. I definitely can not hold the bottom of the phone and reach the opposite top corner. The size of the iPhone 6 Plus forces me to re-learn how to hold a phone. I am now required to hold the phone parallel to the ground rather than angled up. It’s too hard to grip the phone. Using my pinky at the bottom as a prop creates a weight distribution problem. The 6 Plus feels top heavy when I hold it like a 5S and it’s far more prone to tip out of my hand.

The build quality on the 6 Plus is the highest of any iPhone I’ve used. I’m happy they brought back the curved edges but the protruding camera is a bit of a disappointment. The phone loses some of that smooth-stone feel I loved about the early iPhones. It’s not all that noticeable though since very few people could actually roll this phone around in their hand.

The curved edges also improves access to the mute/lock switch on the side. This is good and bad. It’s much easier to feel and toggle the mute switch but it’s also easy to accidentally toggle. I like the new design better.

Even the iPhone 6 Plus feels thin. Its sleek profile reduces some of the resistance to keeping it in my pocket. I’ve always dedicated one of my front pockets to my iPhone. The 6 Plus is still a pocket phone for me. I don’t wear skinny jeans or Hunter S. Thompson short-shorts so I tend to have adult sized pockets. I think the 6 Plus might be too big for suit pants though. I hope to never know for sure.

My favorite aspect of the new design is the curved glass at the edge of the display. It makes the interface feel like it is floating on the surface of the glass.

The 6 Plus screen is beautiful. It’s just about the best screen I’ve ever seen. Apps that scale to the new screen size look fantastic. The Apple Mail app is a pleasure on the 6 Plus. Text looks clean and there’s plenty of space for viewing and editing messages.

Many apps just scale up to the new screen size. They don’t look as bad as running an iPhone app on an iPad, but they still look silly.1 It’s early days still but I predict fragmentation with apps well into the future. Some apps will scale and reformat to take advantage of the larger screen. Others will just expand to fill the space. I think Apple missed a selling point with this large screen. They should have allowed it to run both iPhone and iPad apps as the perfect intersection of both.

The iPhone 6 Plus is at a weird intersection of the Apple line. It’s not quite phone size and it’s not quite an iPad. It feels odd that I can’t run an iPad-only app like OmniGraffle or OmniOutliner on the 6 Plus. Other apps need a lot of attention to work well on the larger screen. My favorite text editor, Editorial, doesn’t work in landscape mode (the keyboard is non-functional) but even if it worked, the interface feels cramped when blown up. (CORRECTION: A delete and reinstall of Editorial fixed the landscape typing. Computers are fun.)

Apps that do work in landscape and scale correctly for the 6 Plus feel great. I’m far more accurate typing on the 5.5 screen in landscape than I am with a 5S. It’s the perfect thumb-typing size and I’m very efficient with it.2

I think there is tremendous opportunity with the 6 Plus to create a new class of device for people that need more than a typical iPhone provides but do not want to carry an iPad or Macbook. This is a size screen for people that live in email or want to do a lot of writing on a bus or plane. Sitting on the couch ready makes me forget how terrible the size is for a phone and makes me appreciate how great it is for a pocket computer.

The buttons on the iPhone 6 Plus feel solid but the clickiness is reduced over previous models. The home button has very little click to it. If you’re into clicks you might not like the 6 Plus buttons as much. I like the feel.

I don’t like the new placement of the power button. Apple definitely needed to move the button since it would be too awkward at the top of an enormous phone. However, placing the sleep button opposite a camera shutter control button is a disaster. I lost several great photo opportunities by accidentally hitting the sleep button when trying to gain extra leverage on the shutter control button.

The camera on the 6 Plus is very nice. I had good luck with some low light photos and some action shots at a birthday. I quickly realized that I didn’t enjoy taking photos with the 6 Plus, or at least I was less eager to pull it out for a quick candid shot.

As a dedicated camera, the 6 Plus is great. If I didn’t already own an Olympus OMD, I’d be very happy capturing everything with the iPhone 6 Plus. As it is, I prefer the quality of the shots and comfort of maneuvering the OMD over the 6 Plus.

The battery life on the 6 Plus has been astounding in the short time I’ve used it. I think this is partly due to the large battery and mostly due to having a freshly installed OS and a limited number of apps. Whatever the reasons, I’m getting much more than a full day out of my phone under normal conditions.3

The biggest battery hogs (as highlighted by iOS 8) are Tweetbot and Overcast. I suspect Overcast gets a bad rap because it was attempting to download a bunch of episodes after a fresh install. However, it continues to show as the top offender for background battery usage. I’m OK with that right now.

This is the first time I’ve voluntarily done a clean install. While I did create a verified backup I decided I wanted a fresh start with iOS 8. Instead of doing a restore, I installed some core applications but otherwise left the device empty.4 I’ve installed a few more apps along the way, but most of the apps I was lugging around on my 5S had not been used in at least 6 months.

As mentioned above, I think the clean install is giving a better experience after spending about an hour installing and configuring the apps I use regularly.

I made several trips to an Apple store with my 5S on iOS 7 because of poor battery life and crashing. Each time I was told by a different Genius that I should kill apps. Rather than argue the point, I did some testing with ACTMonitor to prove that dormant apps do not consume resources. That assumption was wrong. On iOS 7, background apps can still stay in memory. I still don’t kill apps, but I do run fewer apps.

I was also told that the crashing can be caused by restoring a corrupted backup. Whether or not this is true, I’ve removed one less variable for the next time I go to the Apple support desk.

The iPhone 6 Plus has grown on me over the weekend. Sure, it’s often unwieldy and uncomfortable. It’s also a great hand-held computer. I love reading and writing with it. Scanning the web and working in email is luxurious. After only three days, going back to my 5S for email feels cartoonish. I’ll be keeping the 6 Plus for now but it’s hard to recommend it. You really need to hold it to appreciate the size and feel. I wouldn’t suggest buying a mattress based on pictures and the same goes for the new iPhones.5

If you rely on one handed use, I can easily dismiss the 6 Plus as an option. If you want the most portable and powerful pocket computer then the 6 Plus is almost perfect.