When I moved my photos out of Aperture and into nested year/month folders one of the difficulties was reorganizing photos without clawing my eyes out. Luckily Hazel had me covered.

Normally Hazel only works on the files within a specified folder and often I consider it just a quick filing utility. To dig deeper and operate on each file in all subfolders we need some Hazel trickery.

If you have multiple rules set on a folder, they run in order. This trick requires two Hazel rules, one to traverse the folders and the other to move the files out. 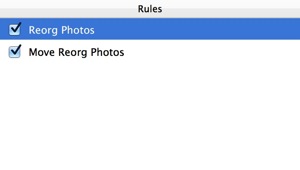 The first rule operates on folders and the action is simply to execute the next rule (Move Reorg Photos). That’s cool, right? Hazel has an action that tells the next rule in the sequence to operate on the folder contents.

The next rule operates on each image file in the sub folder and moves it to a new directory. Since we want the files in folders organized by year and month, we set two sequential actions. The first action moves the photos to the new parent folder. The second action organizes them into subfolders. But we need to specify the new folder structure.

On the Sort into subfolder action set the pattern for the folders and choose the date created option. Set the first folder as the creation year. Then add the right facing triangle and add the creation month.

Now when Hazel runs on the parent folder menagerie of photos, it will methodically resort them into the new location organized by creation date. 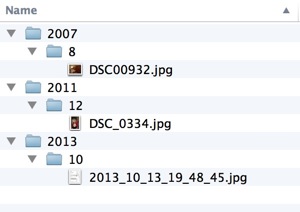