I may have tested a dozen RSS services in the past six months. Of all of the options, I liked NewsBlur, Feed Wrangler and Feedbin the best. I’ve primarily used NewsBlur for its intelligent filtering of my feeds. I’ve also maintained my Fever server but it has begun to lose my interest as development has dried up.

Each of these services have matured over time. While Feedly continues down a slippery slope I dislike, NewsBlur, Feed Wrangler and Feedbin continue to provide an honest service for an honest fee. That should be honored and rewarded.

Here’s my tribute to the three best feed aggregators out there.

Filtering For Sanity and Enjoyment

I have three modes of feed reading:

I also have a lot of different interests. This means that I subscribe to a lot of different feeds. As of this writing, I have almost 900 feeds in my subscription list. I read about 1% of all of these sites on a daily basis. However, they power my Zite reading and I leverage filters and searches to bubble up things I want to see and suppress the stuff I don’t care about. It’s not much different than using filters and lists on Twitter.

There are two downsides to my use of filters:

Because they are server-side, they are not portable from one system to another. Each feed aggregator has its own implementation.

Second, my use of filters means that many otherwise great services do not satisfy my needs.

You may have guessed that this feature is what informed my selection of three specific services. Here they are from most to least flexible:

Feed Wrangler is a very good service. The filters are excellent and it’s designed for people that actually read feeds rather than just mark everything as read once a week.

I like the flexibility of Feed Wrangler but the lack of easily defined categories turned me away 6 months ago. The setup process is easier now but still a bit tedious. The filters are the reason to use Feed Wrangler.

Feed Wrangler filters can be applied globally or as part of a smart stream. A smart stream is like a category or label in other reading services. You can select individual feeds to include or create a smart stream based on search filters. For example, a stream made of common developer terms, minus “Monty Python”:

Feedbin Actions are similar to Feed Wrangler filters. The actions can be configured to mark articles as read or starred based on matching words. 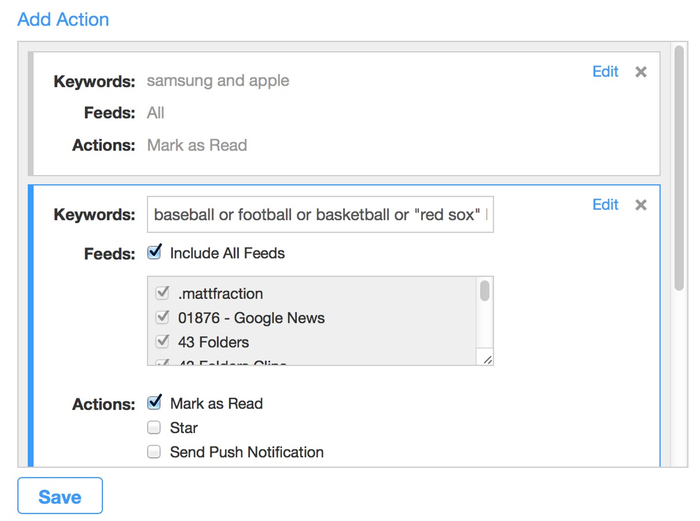 You can even enable push notifications within Feedbin’s web app.

I guess this is for any articles that you just need to know about right away. I don’t have that need. Ok, may for a Dr. Drang article about bridges.

As I mentioned, the NewsBlur intelligent filtering is great. It filters out articles based on keywords. Keywords can be selected at any time while reading an article, which means I added a lot of keywords. Unlike most other services, NewsBlur does not just mark these “bad” articles as read. They are put into a different view and marked with a red dot. I like this because it provides a convenient way to see what my filters might be getting wrong and make changes. Usually they are perfect.

Since moving from Fever to NewsBlur, I’ve noticed that I spend far less time browsing articles. That’s what a good aggregator means to me. In any given reader session there are a handful of articles that I don’t ever see and I’m happy about that. NewsBlur proudly displays how well it is filtering too.

Most Google Reader alternatives lacked global search 6 months ago. It was a reasonable gap at that time but now it’s become a nuisance. After years of saving articles, the inability to search the list becomes a waste of time spent scrolling. Additionally, I use search to focus on a single popular topic. For example, when a new app comes out, it’s nice to quickly find all of the articles about it so I can compare and contrast opinions.

Feedbin provides the best search syntax I’ve used so far. Not only does it support boolean operators like OR and NOT but it also understands starred and read status with search flags is:read and is:starred.

Searches go even further in Feedbin since they can be saved for access in the web app. None of the third party feed readers I have tried support the saved searches but it’s a nice feature if you use the web to access Feedbin.

NewsBlur still does not have search.

Note: NewsBlur does have search for favorited articles and on a per-feed basis. Select the feed and the search bar appears at the top of the window along with the navigation buttons.

My biggest complaint about Fever is that the refresh with any client application is very slow. While there are tricks to overcome the need to constantly refresh Fever from a browser, in practice it just feels like molasses.1

I’ve been pleasantly surprised with the performance of most of the new generation of RSS aggregators. NewsBlur is the fastest. This is likely because they have their own app on iOS that appears to just be a web wrapper of the main site. It doesn’t feel like the iOS app needs to refresh at all when it is opened.

Both NewsBlur and Feed Wrangler have had issues up-time during my testing. The NewsBlur host, Digital Ocean, appears to take a dirt nap regularly.

Feed Wrangler has had a few outages and one, in particular, that lasted an entire weekend. I’ve also found that sync performance with third party clients is variable. Occasionally it is so slow that I give up waiting. 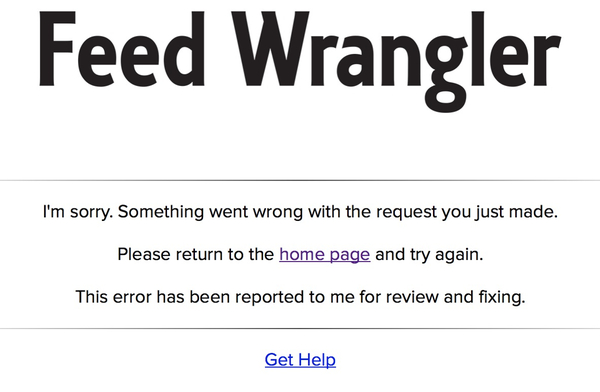 These are one-person operations and it’s a heroic achievement that they even exist. If I’m going to be honest, that doesn’t make any difference to my RSS reader applications. I’m not going to ask for a refund, but I’m also probably going to just use another service. That service is Feedbin.

It’s All About the API

The best thing Google did for RSS aggregation was force a standard API that third party readers could develop against. That meant that any app I used had access to my feeds and starred articles. While it was never really and official API, it was relatively stable.

Many of the new feed aggregation services cloned the Google API, which meant that app developers didn’t need to do much other than access a different end point.

I don’t like to sequester my starred articles in a feed aggregator.2 I prefer to get them into Pinboard along with all of my other saved articles. Generally, this is accomplished in one of two ways:

Feedbin, Feed Wrangler and NewsBlur all provide sufficient support for Pinboard actions. These are simple bookmarklets.

Only Feedbin provides a separate feed for starred articles. This means I can just hit a button and IFTTT automatically adds articles to my Pinboard public stream.

With the lack of support for the NewsBlur API in Mr. Reader and alike, I’ve been forced to use their own iOS app. It’s not terrible but it’s not great either. 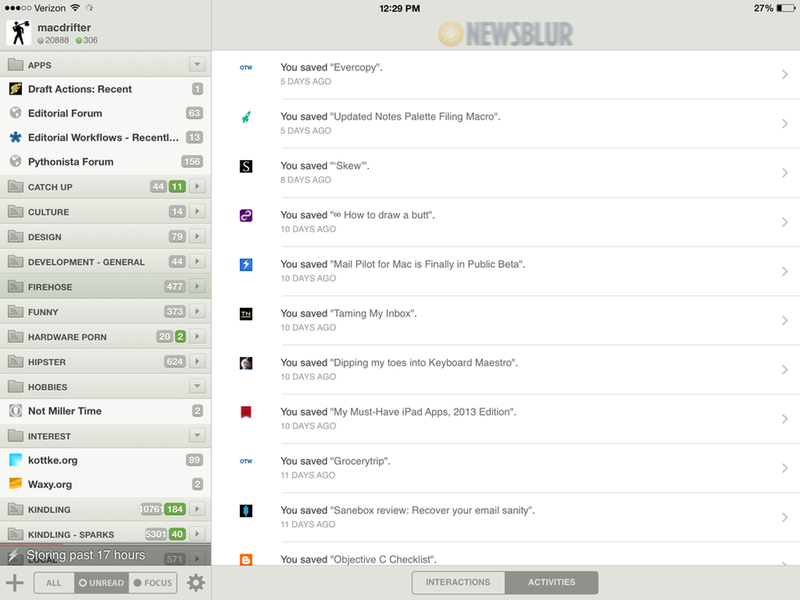 NewsBlur development appears to be directed at improving their own apps rather than creating a more convenient API. That doesn’t fit with my future plans. While it’s impressive to see such a small company develop iOS and Android apps I think it’s wasted effort that could be better spent on improving the infrastructure. I still enjoy the intelligent filtering and the speed but it’s looking like it’s headed in a direction that I’m not interested in.

Feed Wrangler clearly fits with my nerdier character defects. Not only are the smart streams a clever new direction for feed aggregators but the recent addition of podcast support just makes sense to me after the fact. But the service lacks a feed for my starred articles and the uptime and performance is too variable right now. I also don’t like the process of adding a new feed and assigning it to an existing category/smart stream.

The recent addition of filtering and advanced search wins me over. The Feedbin service has been consistent and fast-enough every time I’ve used it. The generic Feedbin API means that all of the readers I’ve enjoyed support it.

I’m particularly happy that I can return to using Mr. Reader for iPad and Reeder for iPhone. The reading experience is dramatically better with Mr. Reader when compared to NewsBlur’s app. 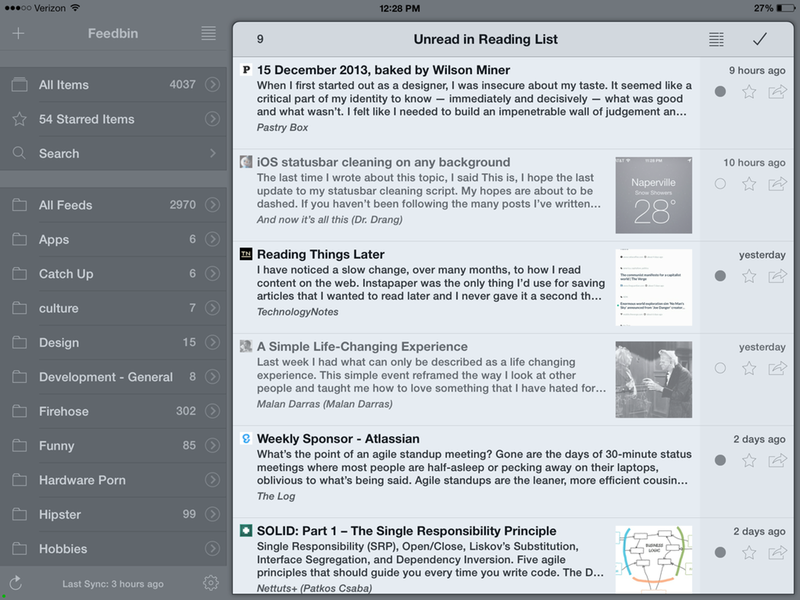 I’m not getting rid of my Fever server just yet, and I’m all paid up on both NewsBlur and Feed Wrangler for at least another 6 months. Having several options for feed aggregators that are all actively developed is a blessing and now I’m just deciding between the best for my needs.