One year ago, on the morning after the 2016 U.S. election, I stopped using Twitter. I stopped posting and I stopped reading Twitter. I also stopped thinking of Twitter as a benign advertising company. The months since that decision have only proven my suspicions to be correct. Twitter may be a company, but it’s a company made by people with dubious intentions. I’m less charitable than Mike Monteiro (which surprises even me) when it comes to making allowances for people just doing their jobs. Twitter used to be a place of rapid innovation driven by creative engineers but it has shed many of its well intentioned staff and I think it’s behavior is inexcusable. Their lack of concern betrays their corporate philosophy and I don’t want to contribute to that any longer.

There were plenty of warning signs that I chose to ignore because I didn’t think they directly effected me. The conclusion of 2016 was a final closing scene to a really shitty Netflix series. It was the end to a year that Twitter dominated too much of my life and then saluted me with a big giant middle finger on November 8th. But I want to be clear. I am part of the problem.

My anger is partly about my own bad choices. When I read plenty of first hand accounts about Twitter as a platform for rape threats, I chose to remain as one of the counted AMUs. When I saw that Twitter had a Nazi problem, I accepted my role as being a Twitter product to sell ads against. When I saw Twitter trolls pile on innocent people because they had the nerve to be a woman with a career, I kept scrolling my timeline and churning away those engagement numbers.

Let’s take a break for a minor rant about shitty engineering and bad company philosophies. 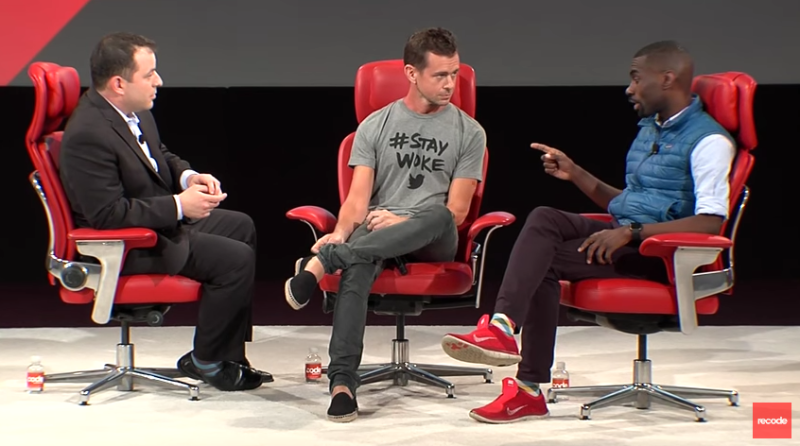 Jack Dorsey has time to shop for slim-cut “Stay Woke” shirts but apparently it was a low priority problem to learn what abuse on Twitter looked like and filter it out. Twitter-the-company is made up of people that have consistently made poor, self-serving decisions while patting themselves on the back for making the world more connected. Well, fuck you all. You gluttons helped put us all here and now suddenly you might come up with an algorithm to spot Nazis? Here’s an idea to put on your fucking Trello board: Look for avatars with swastikas on day one. Take day two off to recover from your code bash hangover. Day three you can look for accounts that mostly post negative sentiments (using a Python library that’s five years old) and then map their connections to find another Nazi pool-party. On day four, take another break. You deserve a rest for waiting a decade to do even the smallest amount of engineering work to make the world better. Day five might be busy while your executives are explaining to congress why you actively assisted a foreign government to spread disinformation during the US election. Also, enjoy your weekend you fucks.

Well, that felt good. I’ve received a lot of emails asking about why I’m not on Twitter. I’ve always replied modestly and I’ve avoided making a spectacle on this website. But today is a special kind of anniversary so please grant me this one small outburst.

2016, or the “great clusterfuck” as future generations will call it, was educational. I learned that there’s no such thing as a private life and that pastry companies can be cut off at the knees for joking about hair styles. I was also reminded that one of humanities greatest skills is inventing technologies that we are incompatible with. Like nuclear fission, social media has gotten away from us and now we scramble to recover our society from the brink of calamity.

Without any humor or reluctance, I can say that Twitter is not healthy for me. This is a hard thing to admit. I’ve met some of my best friends through Twitter. I learned of major world events and new episodes of Adventure Time. I’ve seen enormous kindness and terrible betrayal through the lens of Twitter. Maybe this is the problem. It’s impossible to comprehend the variety of human experiences I need to interpret while scanning Twitter. Yet, Twitter is far from a magnifying lens. It’s more like a kaleidoscope or a fun mirror. It’s showing what humans pretend to be when we perform for each other. The greatest attractor in social technology is the grotesque exaggeration. We love to see the extreme. We eagerly drool when our view of the world is stroked and we are told that we are the righteous minority.

“Segregation: This election displayed a remarkable geopolitical split between cities and inner suburbs, and outer suburbs and rural areas. This makes perfect sense. We never interact. Many of us hoped that the internet would increase our interaction with people who didn’t look and think like us. Sadly, it merely offered us the opportunity to create and live in digital silos of homogenization.”

So there’s also a self delusion part of Twitter that I’m attempting to avoid. There’s also the shared delusion that we now know is the backbone of Twitter. As many more people turn to social media for their news we simultaneously discover that it’s a major participant in disinformation. I always knew that Twitter wasn’t reality but I rarely considered how much of it was an orchestrated fabrication.

Let’s put aside the Nazis, and Russian trolls, and the bigots, and the fake news mongers. That’s a hell of a start to a thought experiment, but let’s pretend we don’t care about those terrible things. The last year has been better for me without Twitter. I’m much less distracted by meaningless information. I spend more time talking to my family. I’ve focused on actual friends that I want to consciously cultivate.

I once thought that Twitter was terrific for staying up on current affairs and staying plugged into the news. I now realize that just isn’t true. Twitter is mostly useless garbage. Anything with real meaning and value will distill up to other sources. By relying on Twitter as an information feed, I asked for a planet of lazy reactionaries to tell me what I should think is important. Now, instead of using Twitter, I read actual journalism. The first thing I read in depth was about Richard Nixon. This helped me to understand just how bad a terrible president like Trump could be. While that didn’t help me cope (because, Nixon was a terrible disgusting person and we are all still suffering from his bullshit) it did teach me something real instead of someone’s theory about meaningless garbage.

If you are a Twitter user, answer this. Keep it to yourself, but try to be honest. What valuable thing have you learned from Twitter in the past 48 hours? Was it about an Apple product or something about some tech startup not liking poor people on their commuter buses? Did you take action on the information? I’m not going to judge you, but I will tell you that in my experience what Twitter gave me was almost never valuable and it certainly came to the exclusion of actual joy.

So here I am, 12 months later. I’m still saying “Fuck you Twitter” and I mean it more than I did in 2016. Today we have real data to show the malevolence of Dorsey, Williams, and the cadre of people that make up their company. My life is better without Twitter, but unfortunately Twitter still has an effect on my life. It’s still a malignant force and I think about its consequences every morning like it’s November 9th 2016.