As a longtime fan of DEVONthink on both the Mac and iOS I was skeptical of Apple’s new Files app for iOS. After a few weeks I can say that it’s a good start but has a large gap when compared with the more feature complete DEVONthink To Go. For some the differences may not warrant the extra expense so I’ll attempt to break down the good and the bad for each document syncing option.

Let’s start with the basics. The main reason to use the Files app or DEVONthink To Go is to sync data between devices. The Files app uses iCloud while DEVONthink To Go hangs off of Dropbox, Box, or WebDAV.1 The secret sauce with DEVONthink is that it’s not just using a Dropbox folder to hold the file objects. It has its own encrypted sync store which obfuscates everything from the middlemen. While I trust Apple and iCloud, given their history, I like the DEVONthink model better.

As for performance, I think iCloud is faster but less predictable. In my experience, iCloud starts syncing as soon as the app is open and shows a representation of the file until it finishes downloading the full object. It also seems to do all of this faster than DEVONthink using Dropbox. It’s not a stark difference but it’s there.

DEVONthink provides basic feedback on sync status but at a high level. I can see what databases are currently syncing and I get a progress meter. I can also manually once a complete resync or recreate a sync-point. With iCloud all of that is mostly hidden.

Where iCloud has an edge is in new device setup. iCloud just pulls everything down with no fuss. DEVONthink, on the other hand, generally requires an app delete and reinstall when setting up a new device from a backup. With a lot of databases, this is a real pain point. With a lot of data, it can feel nearly impossible.

The major issue is that when the device goes to sleep, so does the syncing. This requires a long tap-dance to keep the screen awake long enough to finish downloading all the data.

I rarely experience errors with DEVONthink sync with Dropbox, but when I do there’s some minor amount of notification. There’s also direct support from DEVONtech to help resolve the issue. But., I’ll tell you now, the answer is almost always to delete the sync location and start over. That’s less than ideal.

This section is a little unfair, mostly because Apple’s meta data stinks. DEVONthink is the clear winner even before you finish the first paragraph because it supports nested tags, flags, document notes, and read status. 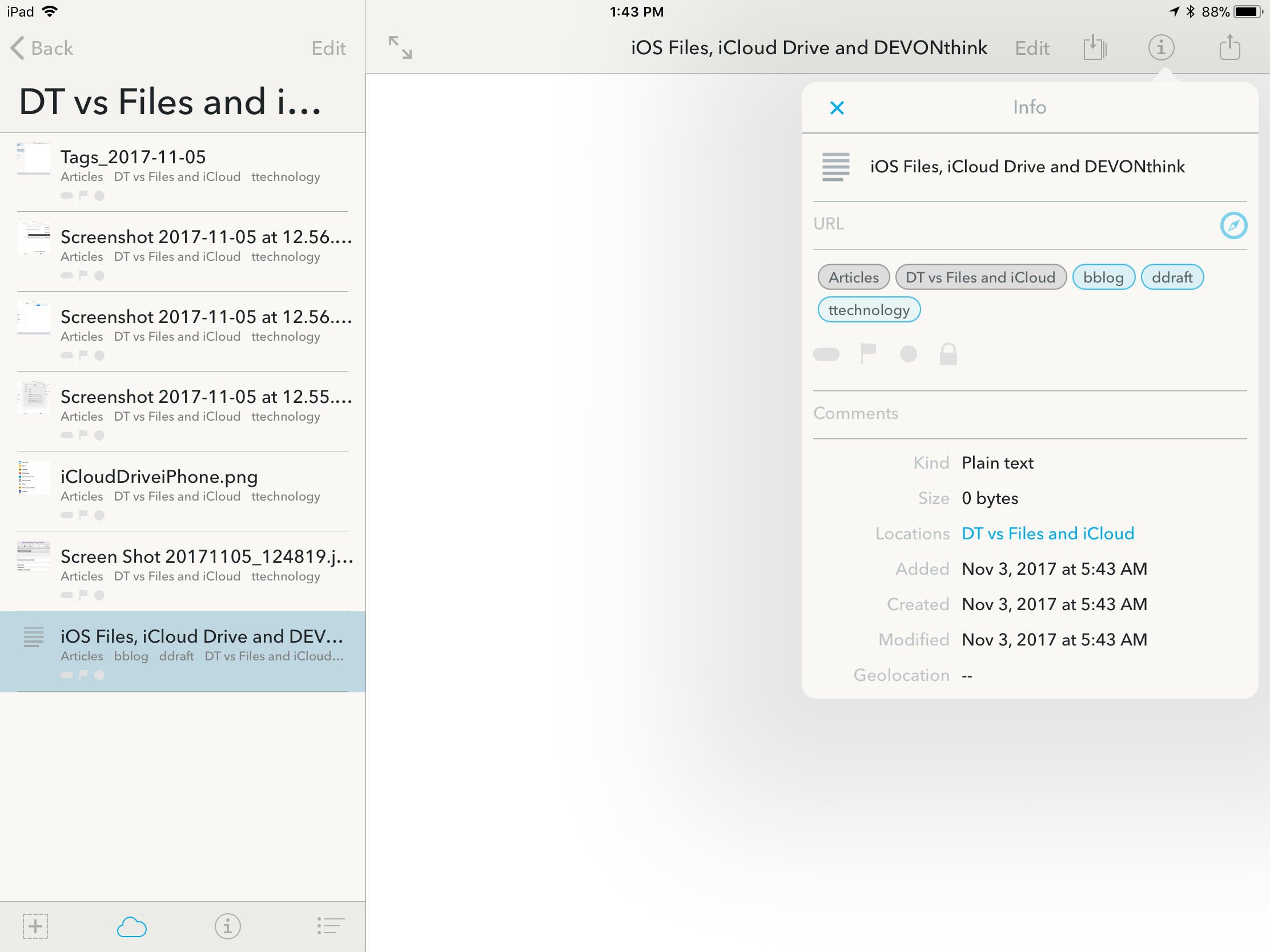 Even just looking at iOS, DEVONthink tags are far more useful and easy to understand than iCloud tags. The tags. Each file in DEVONthink can be tagged manually (with auto-complete) or inherit a tag from a folder name. The tags are isolated between databases, if that’s important to you. Importantly, tags can be searched as part of a global search box or filtered discretely through browsing a list of the tags in a database. iCloud Drive? Not so much.

Searching for a tag in iCloud Drive is useless. 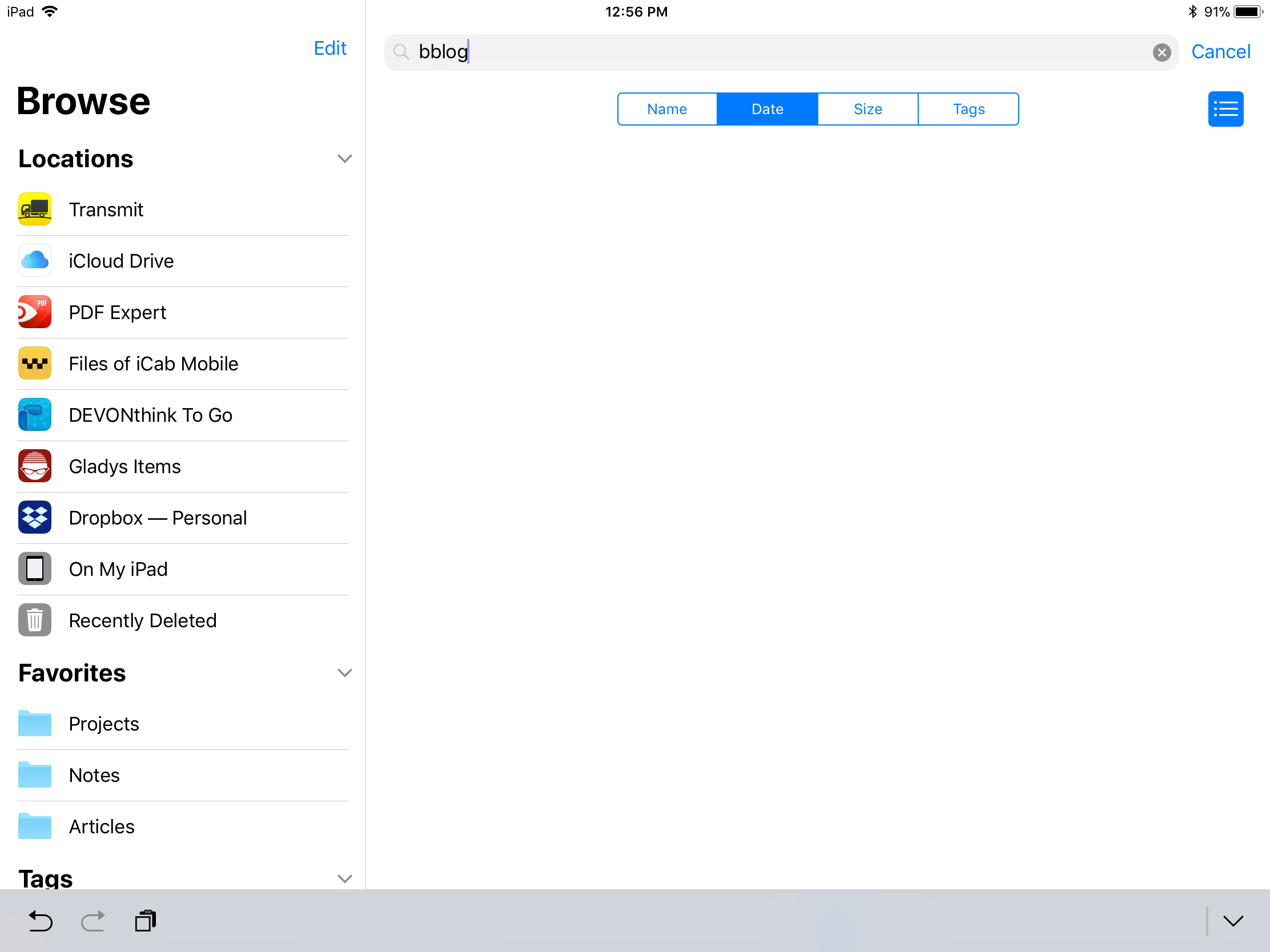 More importantly, I can’t understand at all how iCloud Drive builds up its tag list. While I can have tags on files, I would have no way of knowing that without looking at the file. That’s because the iCloud Drive tag list is dark magic that has no methodology that a user can see. In the screen shot below, the iCloud Drive tags with check marks exist on the file, but they do not appear in the list of tags to browse in iCloud Drive. That makes them useless for finding content. 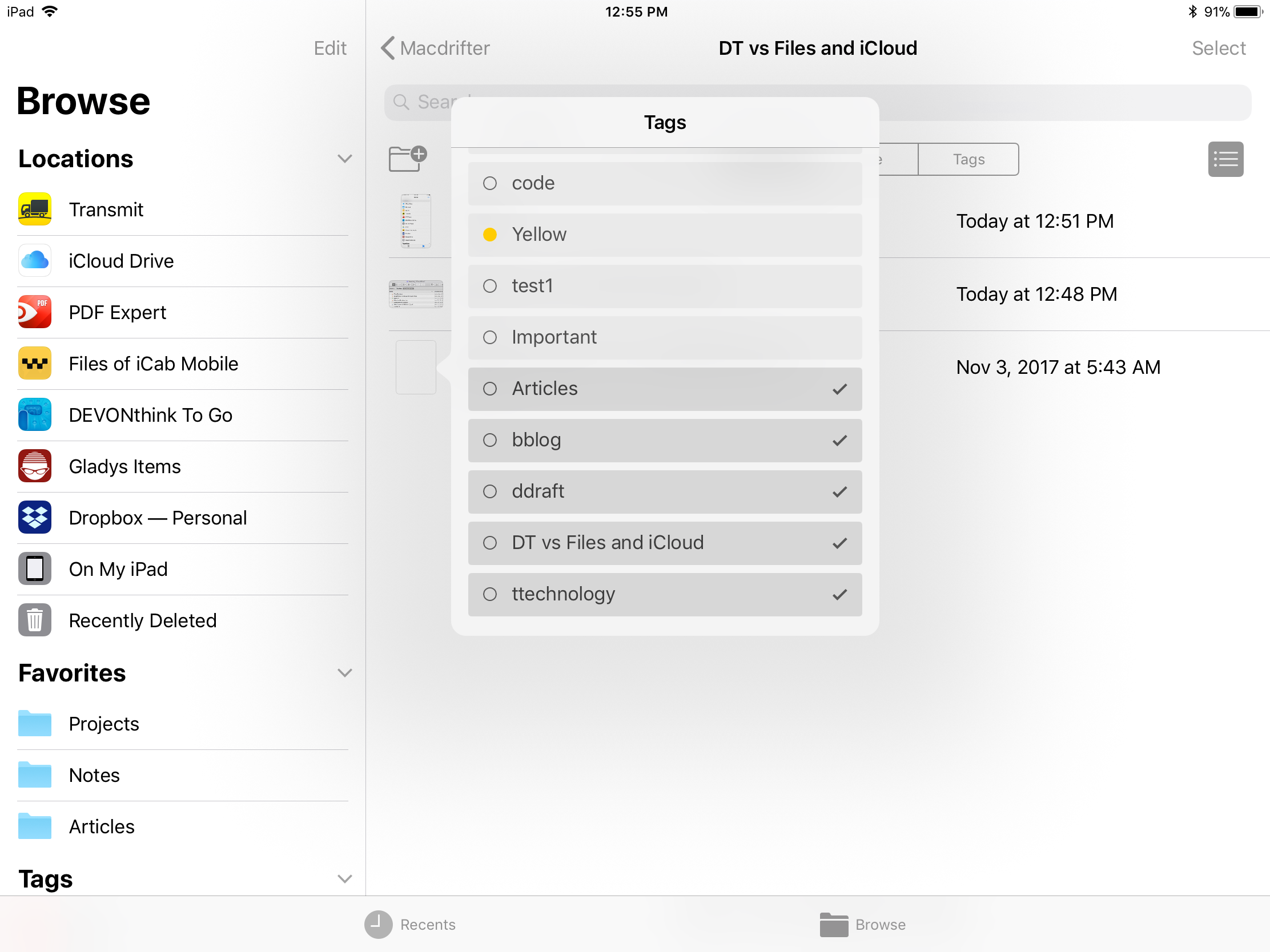 DEVONthink To Go, on the other hand, actually indexes tags for search. This is a very powerful way to create a dynamic organization of information that iCloud Drive fails at. 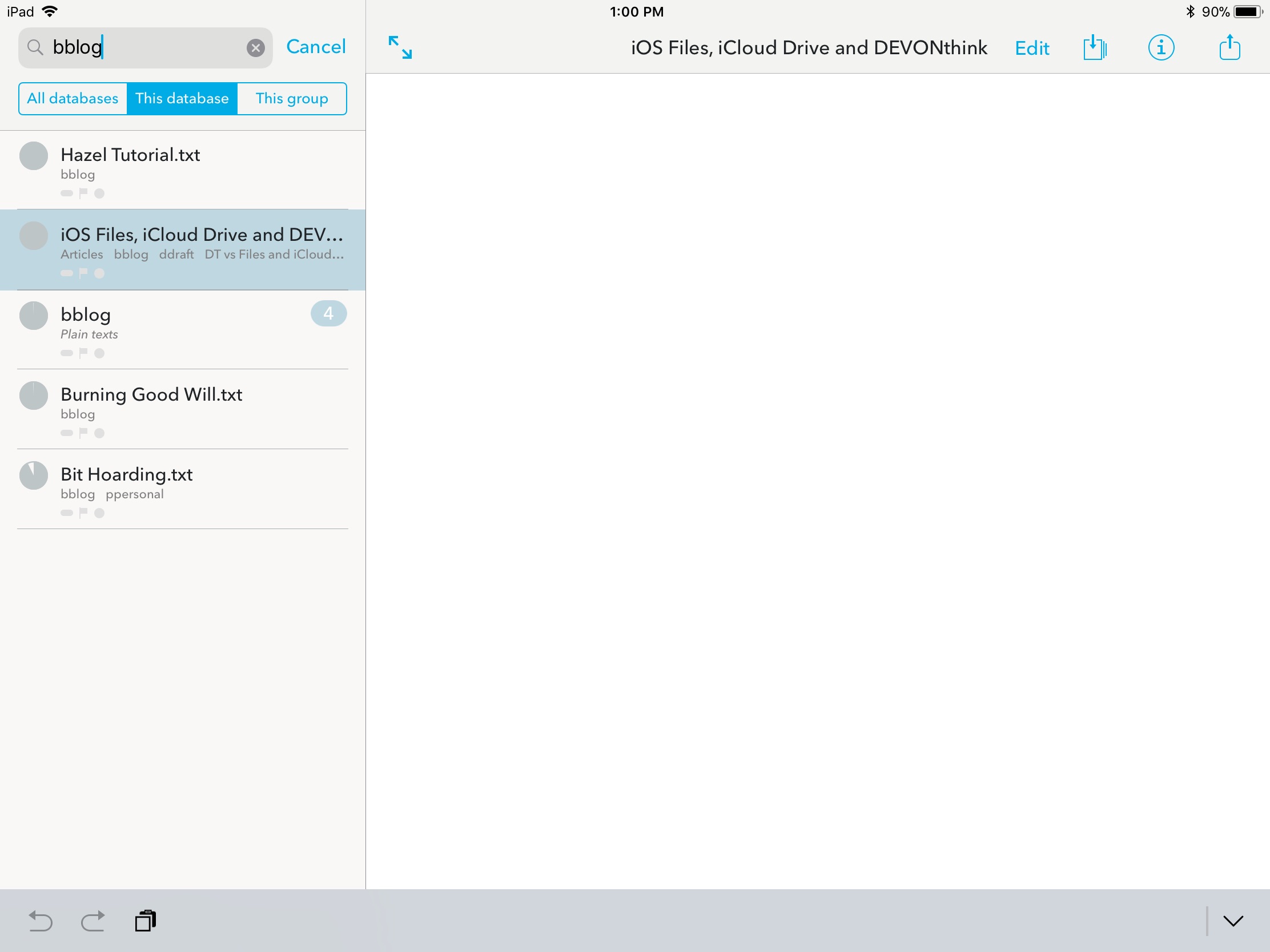 Meta data is a powerful tool in the DEVONthink design. It’s easy to find and it’s easy to add. It feels like an afterthought in iCloud Drive and the Files app on iOS. I’m betting a lot of readers don’t even know how you access the tags on a file in the iOS Files app. Tap and hold to access a contextual menu and then tap the “Tags” item on the pop-over. 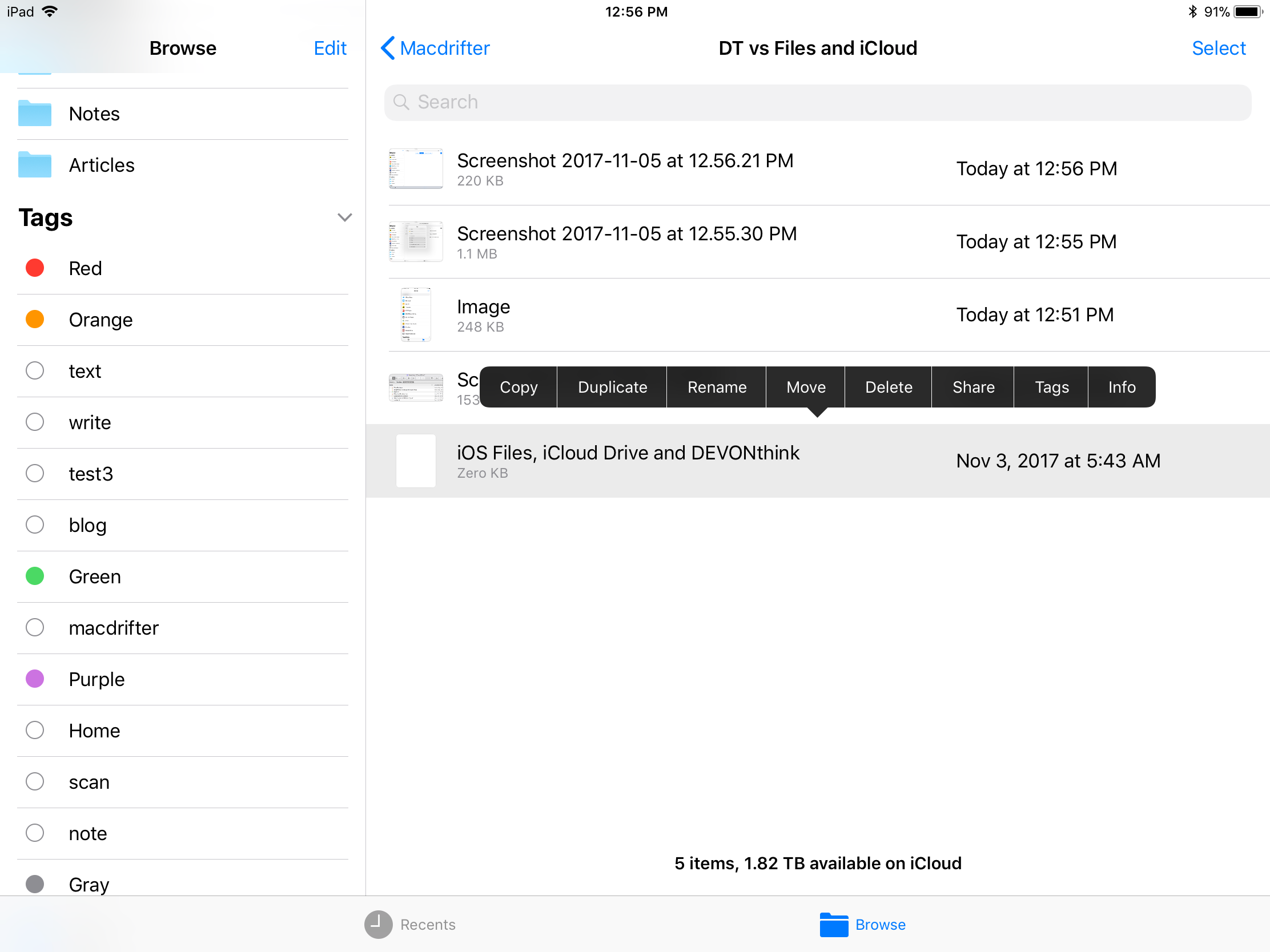 Even worse than all of these minor meta data complaints is the fact that the Files App does not search file content. It searches file names. This makes it completely useless for almost everything I do with files. Maybe this will be solved in a future iOS update, but right now DEVONthink To Go searches file content of most formats and the Files app searches none.2

I find that general browsing is easy in both the iOS Files app and DEVONthink To Go. I love that Files lets me browse content from some apps, but it’s up to each developer to make this happen. But it’s logical and follows the traditional file and folder design. 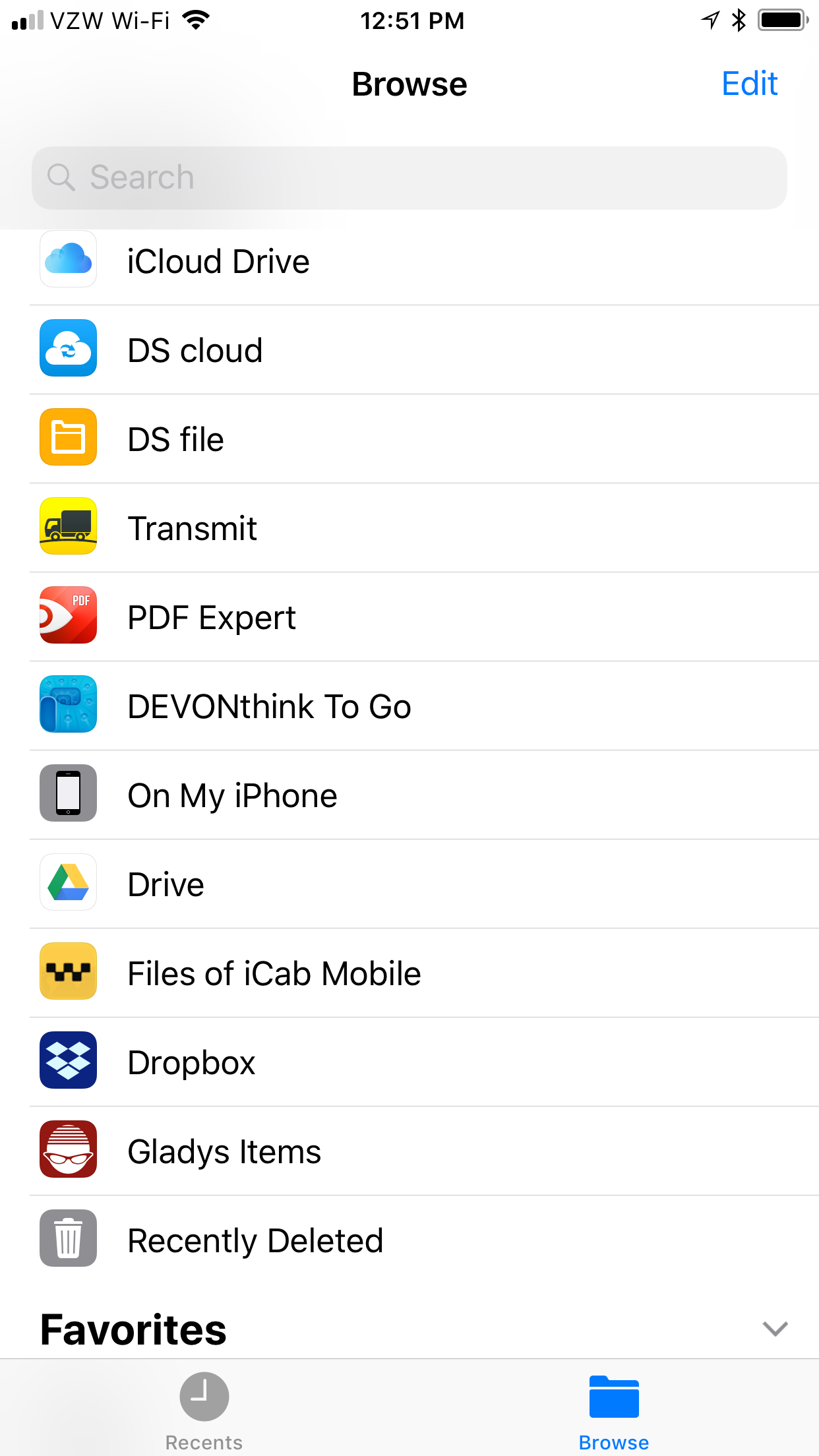 DEVONthink often fails to integrate well with the Files app on iOS. I don’t know where the root cause is, but this is a very common occurrence for me and it only seems to happen when browsing DEVONthink To Go files through the Files app. 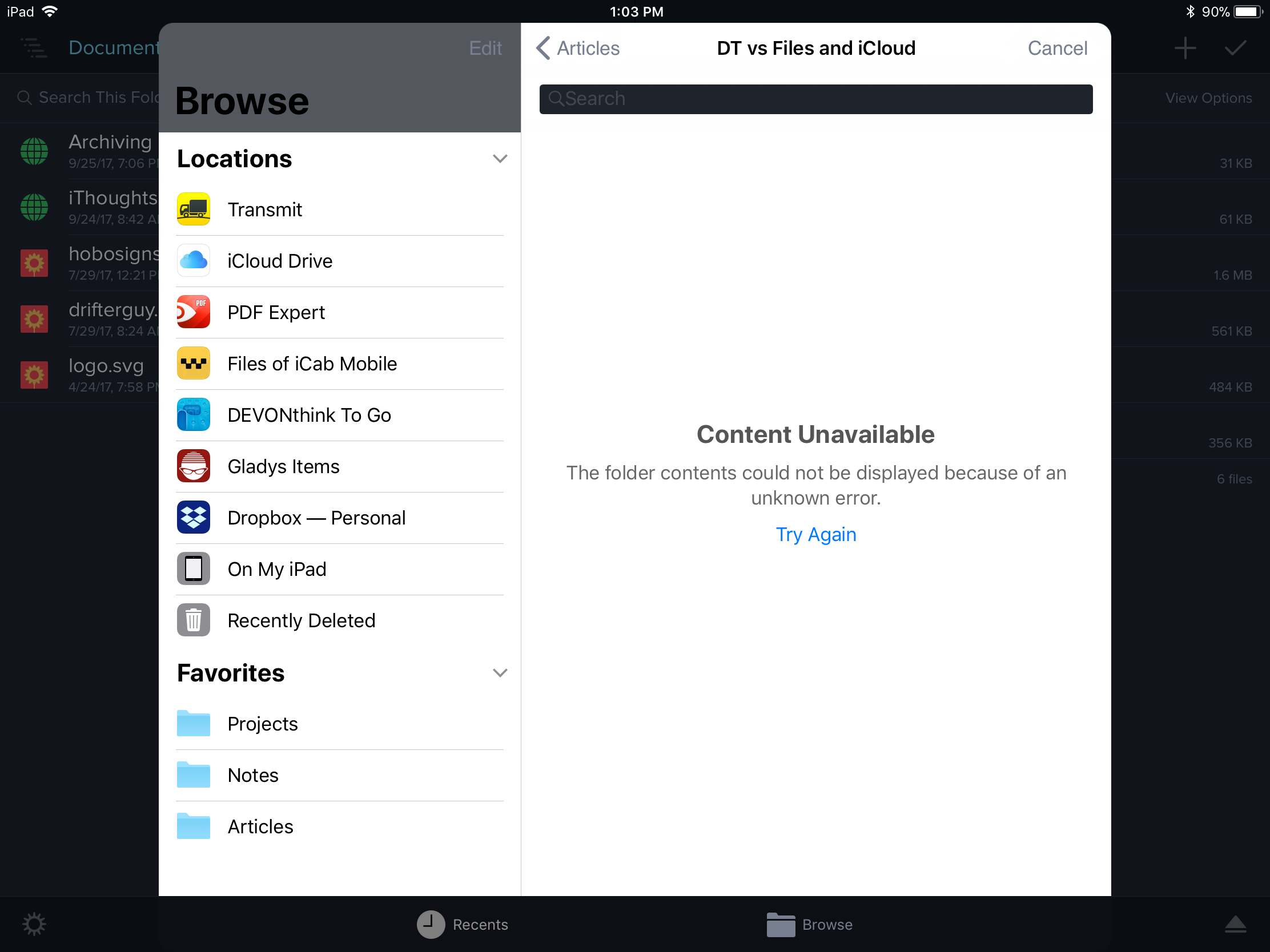 Things are a bit different on the Mac side of the equation. iCloud Drive is much more useful on Apple’s forgotten platform. iCloud Drive just looks like a folder and I can leverage the smart folder tricks I use elsewhere on the Mac.

DEVONthink To Go does a lot to allow me to edit files outside of their app but it’s never a great feeling. The built-in text editor in DEVONthink To Go is not very good and I much prefer 1Writer. To do this I need to share the document out of DTTG to 1Writer, making sure to keep the unusual version ID in the file name. I can edit all day in 1Writer but that doesn’t sync back to DEVONthink. I must then share from 1Writer and use the “Copy to DEVONthink” extension. DTTG uses the version ID in the file name to know which file to replace with my new one. It works well (I’ve never lost anything) but there’s a some mental gymnastics to make sure I save my changes back to the source.

DEVONthink To Go also has quirks and bugs with their text editor. The cursor jumps around and I always forget to hit the “Edit” button when I want to make changes in a text file. But, if I want to edit PDFs in DTTG there’s a really great built-in tool. Of course, from iCloud Drive and the Files app, I can edit a PDF in any number of editors.

The other option is to use the Files app extension and browse to the DEVONthink source. From within 1Writer I hit the “+” button to create a new document but I choose the “Open Other” source. This lets me browse DEVONthink through the Files app sheet and choose the file I want to edit. If it worked well, this would be fine but DEVONthink regularly fails to show a file list. And, if I just found the document through search in DTTG then this will make me browse for it all over again.

For editing, the Files app is a definite winner, because Apple controls the full stack. It’s much more like the macOS Finder ported to iOS.

I still prefer DEVONthink most of the time because it’s easier to find what I’m looking for. Since I own DEVONthink on the Mac and iOS it’s a very powerfull content management system. But, if you don’t want to spend a bunch I think the Files app and iCloud Drive serve most users well. Apple seems to have solved their previous syncing issues and their insistence on hiding the complexity is now paying off with an easy to understand system.