Launcher has dramatically increased my use of the iOS Today screen. I already had a particular affinity for the quick access it provides to information, even when the screen was locked. Launcher makes it a bit more than informational.1 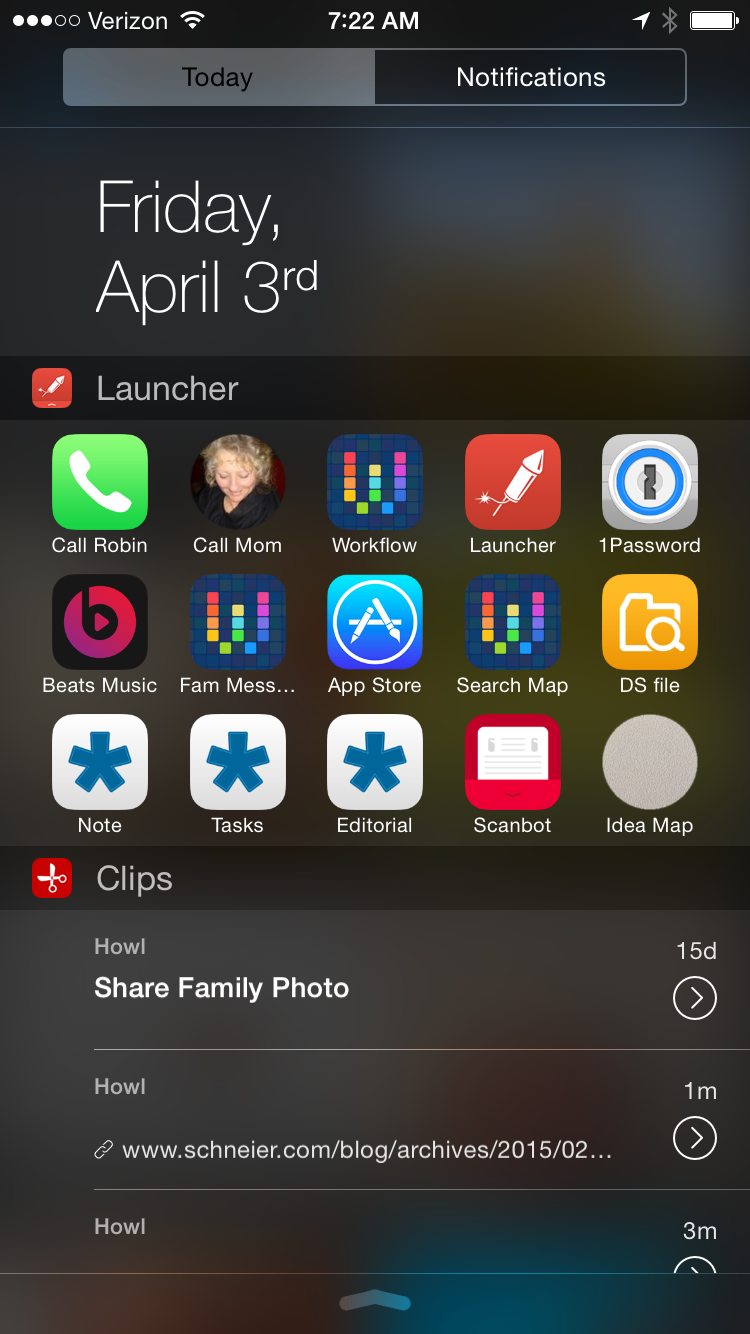 This one is getting pretty heavy use on my Today screen. It's a shortcut that opens Editorial and prompts for a note title. It then creates the new note named with the input in Title Case and a timestamp, like "My Awesome Note 2015-05-02_143204.txt", right in my Dropbox collection of notes.

The Launcher shortcut calls an Editorial workflow that does all the work. The workflow is very simple. It's really just three actions.2 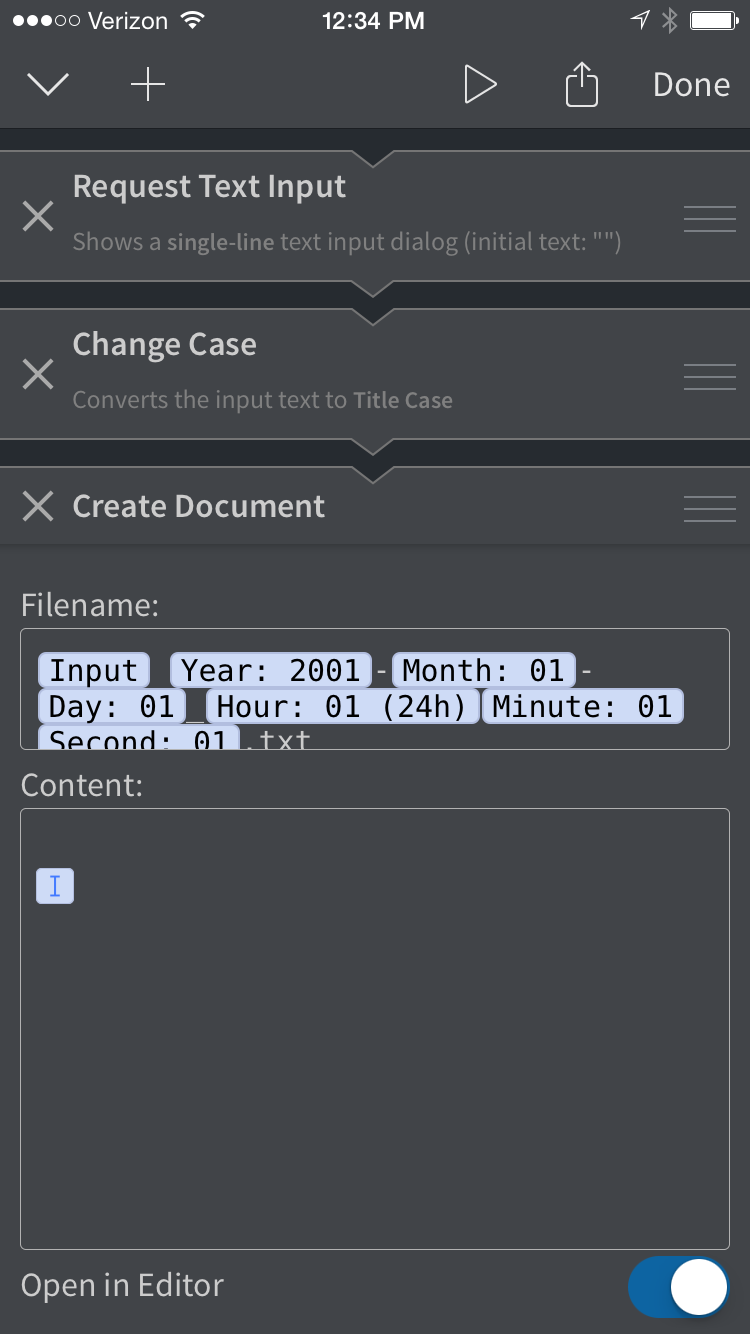 To add this in Launcher, I set the URL to trigger the Editorial URL scheme. 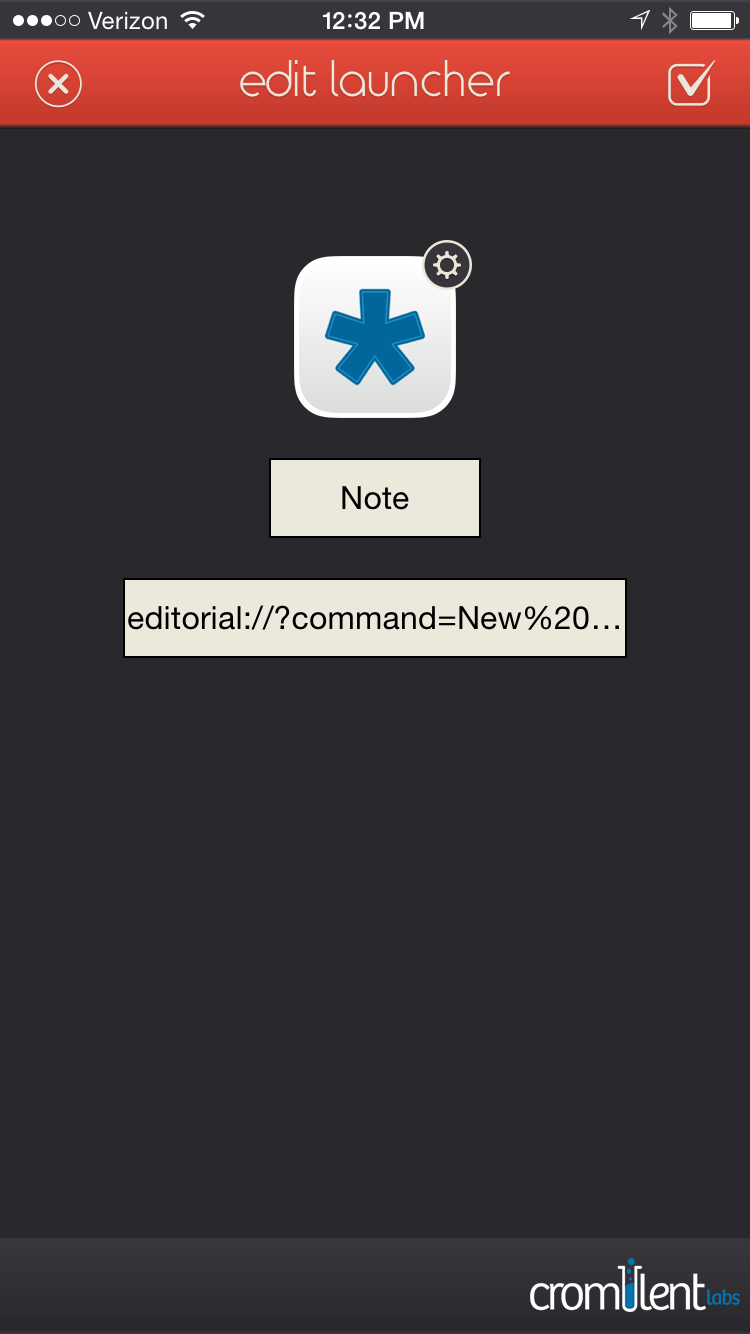 This is another URL scheme trigger pointing at the URL for iThoughts. The shortcut opens a concept map I keep for capturing random ideas. I just manually created the URL and added it as a new shortcut. 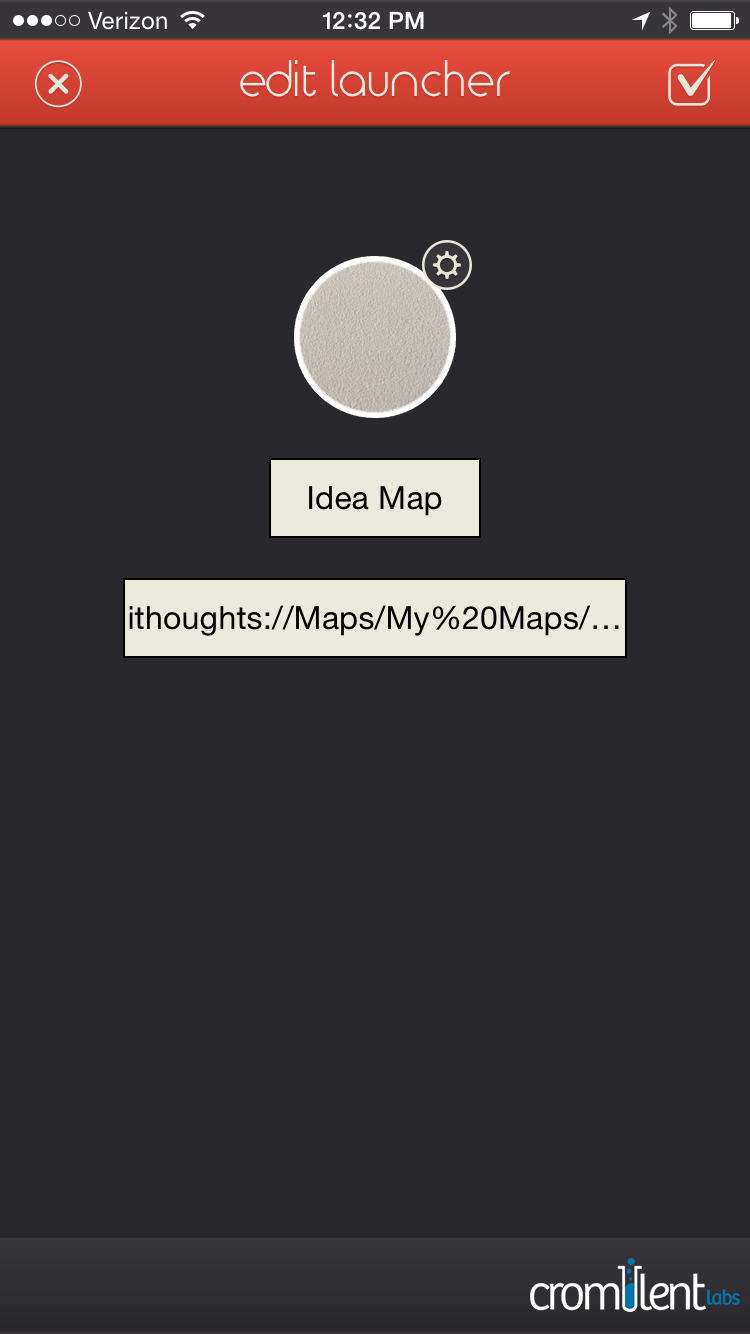 Previously, I kept these as individual text notes, but as always, I have more ideas than time or desire to follow up on them. One file for each idea was too messy. One file for all the ideas made it difficult to focus on just one of them. iThoughts makes it easy to brainstorm and kick out multiple variations on a theme. 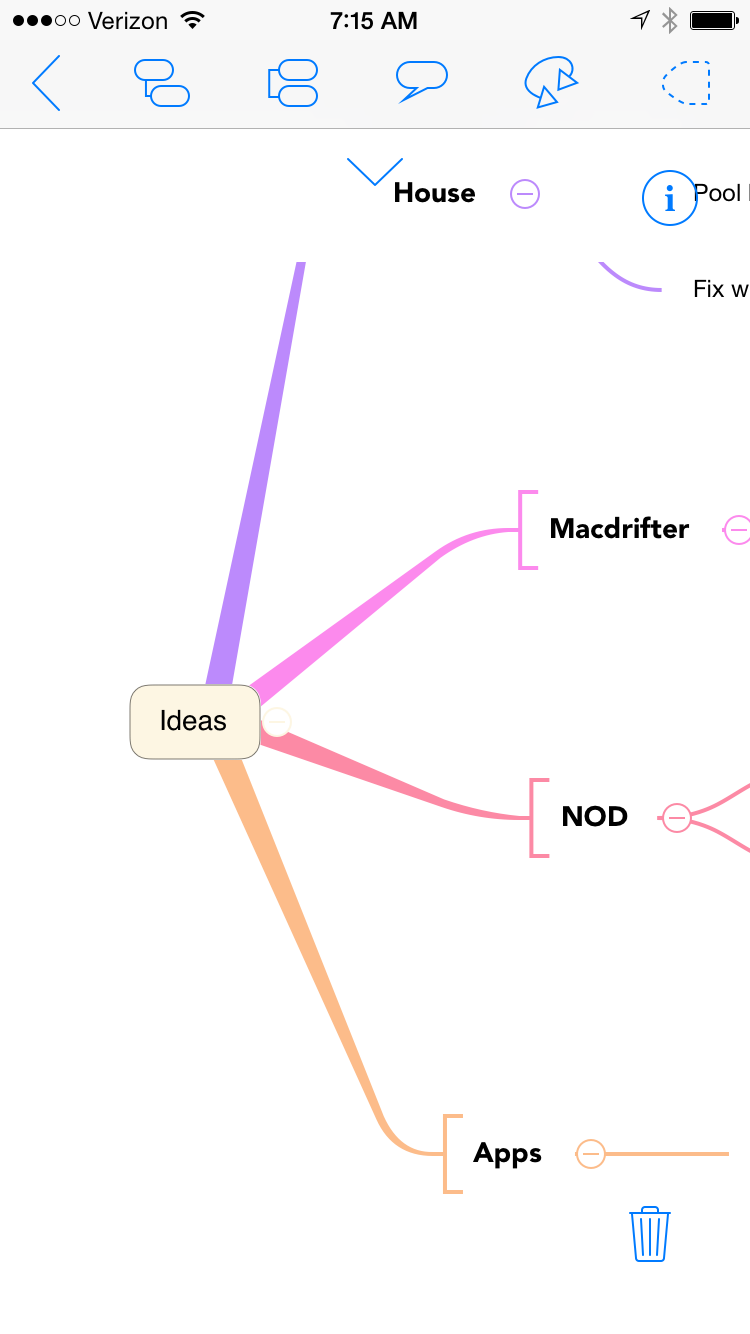 Launcher didn't recognize iThoughts so I didn't get a nice app icon. Instead, I took a picture of the ceiling.3

What's With That Other Junk?

Continuing on to the right, I have shortcuts for Workflow, Launcher and 1Password. I use these a lot. I have a bunch of Workflow macros and I don't mind keeping them inside the app. Quick access to Launcher is convenient for adding or removing, but it's not all that necessary in the Today widget. 1Password gets heavy use. Even with the great new extensions, I still use the 1Browser a lot.

I like music, so I use Beats quite a bit. I wish the Sonos app magically worked to allow me to listen to music directly on my phone. But it doesn't.

Next is a Workflow macro I use daily to shoot messages to family and friends.

I check the App Store too much. I like to read release notes. I'm weird that way.

I have another Workflow shortcut to do a quick map search. I actually don't use it that much and should probably replace it with something more helpful.

Next is a series of informational and task shortcuts. I already described the Editorial "Note" shortcut. The "Tasks" shortcut opens my task list in Editorial and does some magic processing and folding along the way to show me what's due today.4 And, of course, I have a shortcut just to open Editorial.

I use the heck out of Scanbot. I capture a ton of stuff this way and it automatically names the files and uploads them where I need them.

Finally is the iThoughts shortcut I mentioned above. That bottom row gets quite a workout.

The beauty of Launcher in the Today screen is that it's available from the lock screen, while in other apps, and from any springboard screen. It's what the dock should be.

Since adding Launcher to the Today screen, I've changed my work patterns. I use Drafts for iOS differently. It's become much more of a place to type than a place to create and store information. Actions in Drafts are still stupid easy, but quick access to Editorial and iThoughts means I start where I want the information to end up.

I'm sticking to 3 rows of shortcuts in Launcher. It feels too crowded with more than that. The smallest icons are too small for my sausage fingers.

I'm still missing some shortcuts I. I use DS Photo enough that I want a Launcher shortcut.

There are still a few things missing in Launcher. It doesn't support custom icons all that easily. Creating URL shortcuts still requires a lot of knowledge of the shortcuts.