I used the same presentation laser pointer for about nine years, through job interviews, a career as a scientist and into a new career in informatics. It was a moderately priced red (650nm) laser that I had grown attached to over the years. 18 months ago the lens was nocked out of alignment and I ended up with a laser smear.

As a gift, my wife bought me a very nice green (532nm) laser pointer. It was heavy and sparkled in all of its chrome majesty. It was also over $150. That high price tag was partly due to it’s 50mW power rating which meant it was ridiculously bright and somewhat illegal as a class 3B laser pointer.1 It was almost too bright in a small conference room but in a large seminar, it commanded attention. It was also purloined by some soulless neerdowell.

There I was, a down on his luck presenter forced to beg for laser pointers from colleagues like a common post-doc. The shame was almost unbearable. I wasn’t about to drop another $150+ on a new laser pointer. It would have driven me mad with obsessive protectiveness . Neither could I tolerate the looks of pity projected on me by my audience as I sheepishly borrowed a pointer from someone in a higher cast. It was time to rise up and make my decision.

Browsing the endless offerings on Amazon was disheartening. It was nearly enough to end my search and return to the pine-pointer squalor of laser-less presenting. As my cursor hovered over the soul crushing red lozenge of the browser window, I saw it. The perfect combination of choices and cheapness. A three pack of laser pointers for $19. I couldn’t believe my luck.2

I frantically read the reviews, looking for the slightest promise of quality. Did they burn out after an hour? Did they work at all? Did they require A345c batteries only available in the Mongolian hillside? One review. That’s all it took. One 4-star review was enough.3

The 3-pack of laser pointers are cheap, both in price and quality. They are very light in the hand. I miss the heft of my wayward green laser but these perform the job admirably. The pack includes a red, green and blue/purple (405nm) laser for $19. That’s about $6 each, the price of one good piece of pine. 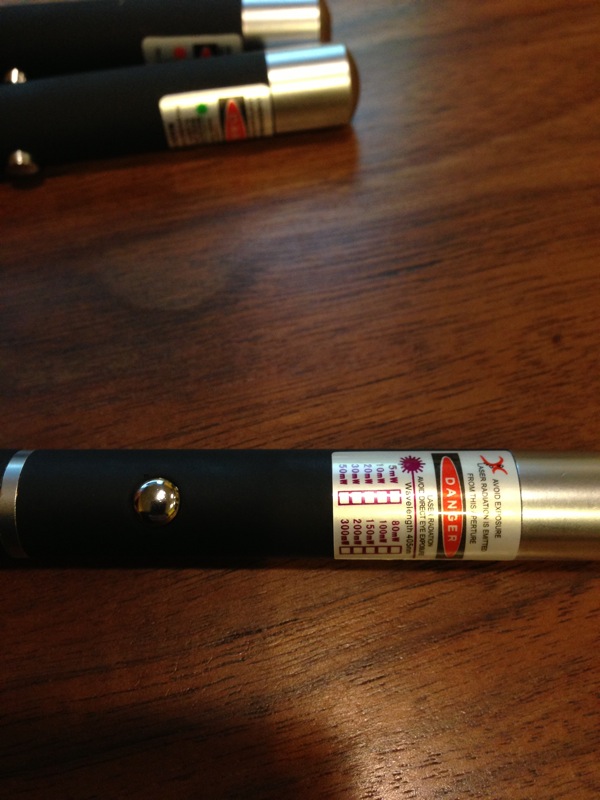 Each laser pointer is identical except for the warning label at one end, which indicates the color, power rating and degree of death caused by the beam. The pointers require two AAA batteries each. I estimate that was $6 worth of batteries to power all three. The buttons feel flimsy. I initially concluded that the green pointer was broken due to an extremely dim laser. After some experimentation, I realized the button on that particular device required three times the pressure. I would save this laser for my angry budget-related presentations. However, after a dozen or so uses the button loosened up but still provides a bit of brightness modulation.

The colors are good. Each appears to be a single wavelength. The green and blue lasers do indeed present some Rayleigh scattering effect. It could be my imagination but even my dog could figure out the origin of the dot on the ground. This is my first experience with a blue/purple laser pointer. I do not plan to use this pointer for presentations. The unnatural color is disorienting on the screen and causes my eyes to change focus wherever the spot appears. Alternatively, this could be a good option for giving presentations that you were railroaded into and to people you may want to disorient. But that’s what PowerPoint is for. 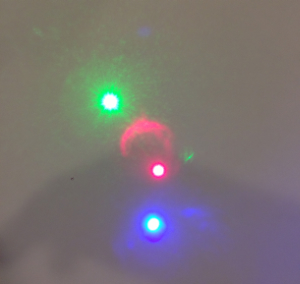 At this juncture in my life, I am pleased with my acquisition. Some say that money can not buy happiness. Those people have never had a toddler and 80lb dog both chase the same $6 green laser.