After less than 24 hours with iPad Pro, here are the reactions I’d give anyone considering an upgrade.

TL;DR: The 12.9" is still huge, the pencil is better, and the keyboard case is a big improvement. It’s a pro-level iPad that’s more than most people need. 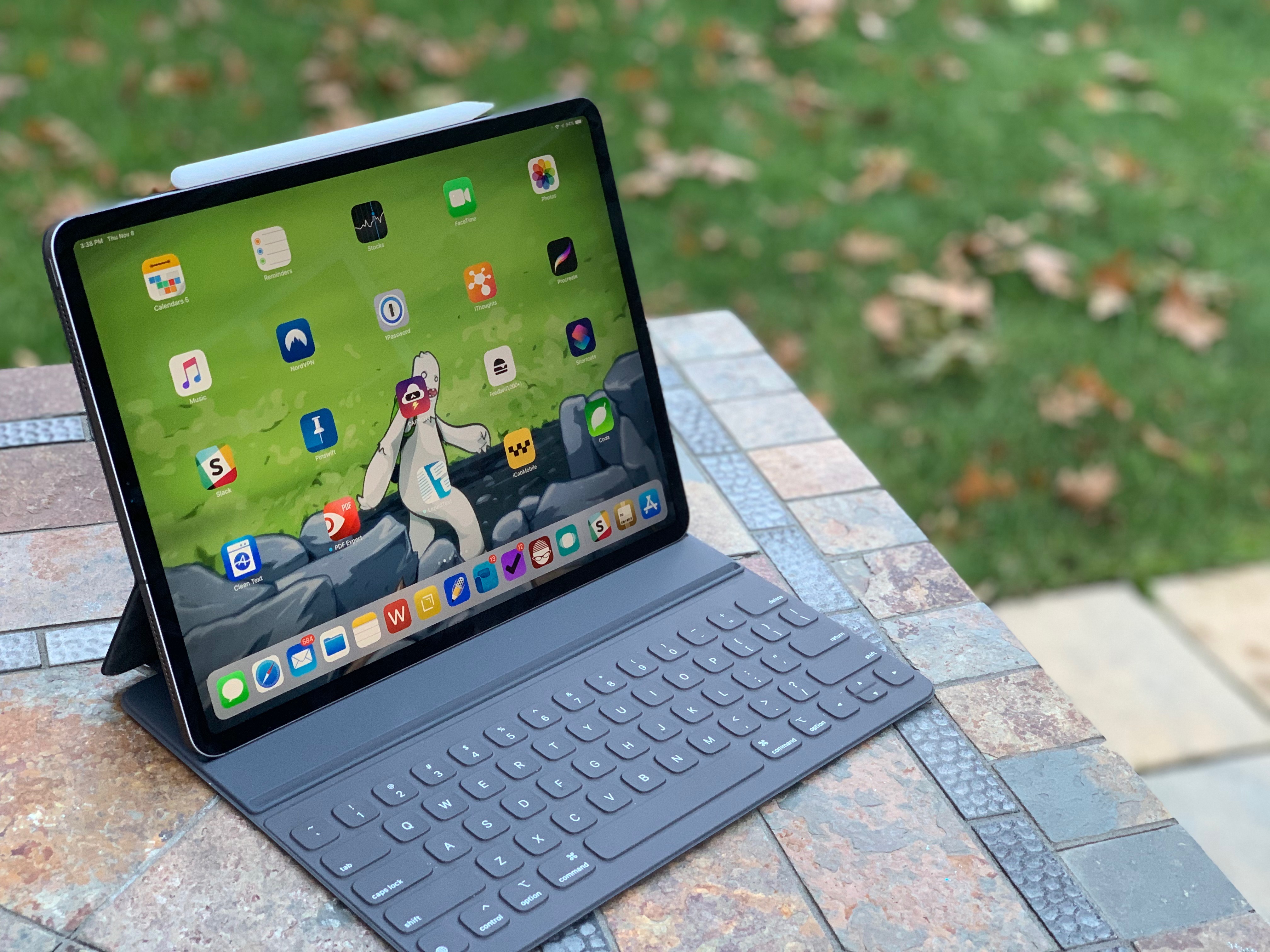 I love the additional screen real estate but that space is usually wasted in most iOS apps. There are either huge gaps between UI elements or massive margins in most text editors. Browsing the web is fantastic and of course split screen feels more useable on the 12.9" model. 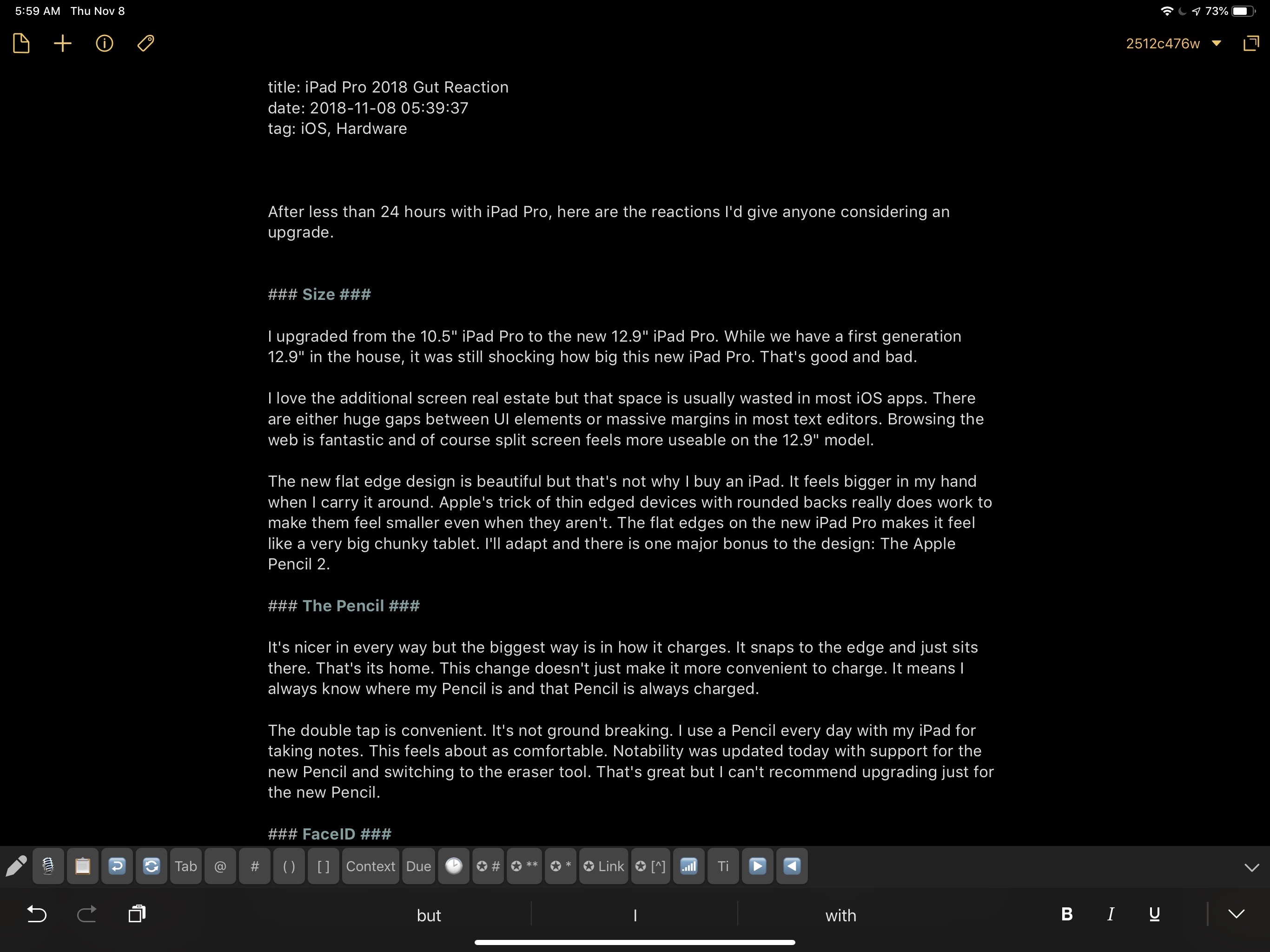 When Apple compares the 12.9" iPad Pro to a pad of legal paper, it’s not completely wrong, but it’s like comparing a brick to a paperback book. It’s close, but that weight makes all the difference.

It’s early but I somewhat regret the larger iPad Pro. I loved the quick portability of the 10.5" iPad Pro and this feels like an unwieldy beast.

The new flat edge design is beautiful but that’s not why I buy an iPad. It feels bigger in my hand when I carry it around. Apple’s trick of thin edged devices with rounded backs really does work to make them feel smaller even when they aren’t. The flat edges on the new iPad Pro makes it feel like a very big chunky tablet. I’ll adapt and there is one major bonus to the design: The Apple Pencil 2.

It’s nicer in every way but the biggest change is how it charges. It snaps to the edge and just sits there. That’s its home. This change doesn’t just make it more convenient to charge. It means I always know where my Pencil is and that Pencil is always charged. It’s not stuck tight enough to just throw it in a bag stuck to the side of the iPad. It’s strong enough to walk between meetings and not worry about dropping it.

The double tap is convenient. It’s not ground breaking. I use a Pencil every day with my iPad for taking notes. This feels about as comfortable. Notability was updated today with support for the new Pencil and switching to the eraser tool. That’s great but I can’t recommend upgrading just for the new Pencil.

It’s always an awkward transition with new UI and the move from a home button to FaceID is the biggest change any iOS user will go through. I miss the home button on my iPhone and now I also miss it on my iPad. I’m so comfortable with double tap and exiting apps with the home button that I still reach for it. I’ll adapt faster with the iPad than I am with the iPhone for one major reason: the iPad is almost always directed at my face when I’m using it.

The “clever” on-screen indicator when I cover the FaceID camera doesn’t feel that clever to me. I often hold my iPad in landscape and most of the time my hand is over that camera. The indicator is very subtle and this means about half of the time I’m looking at a PIN entry screen when I unlock my iPad. It’s another thing I’ll adapt to over time as I learn not to hold it “wrong.” 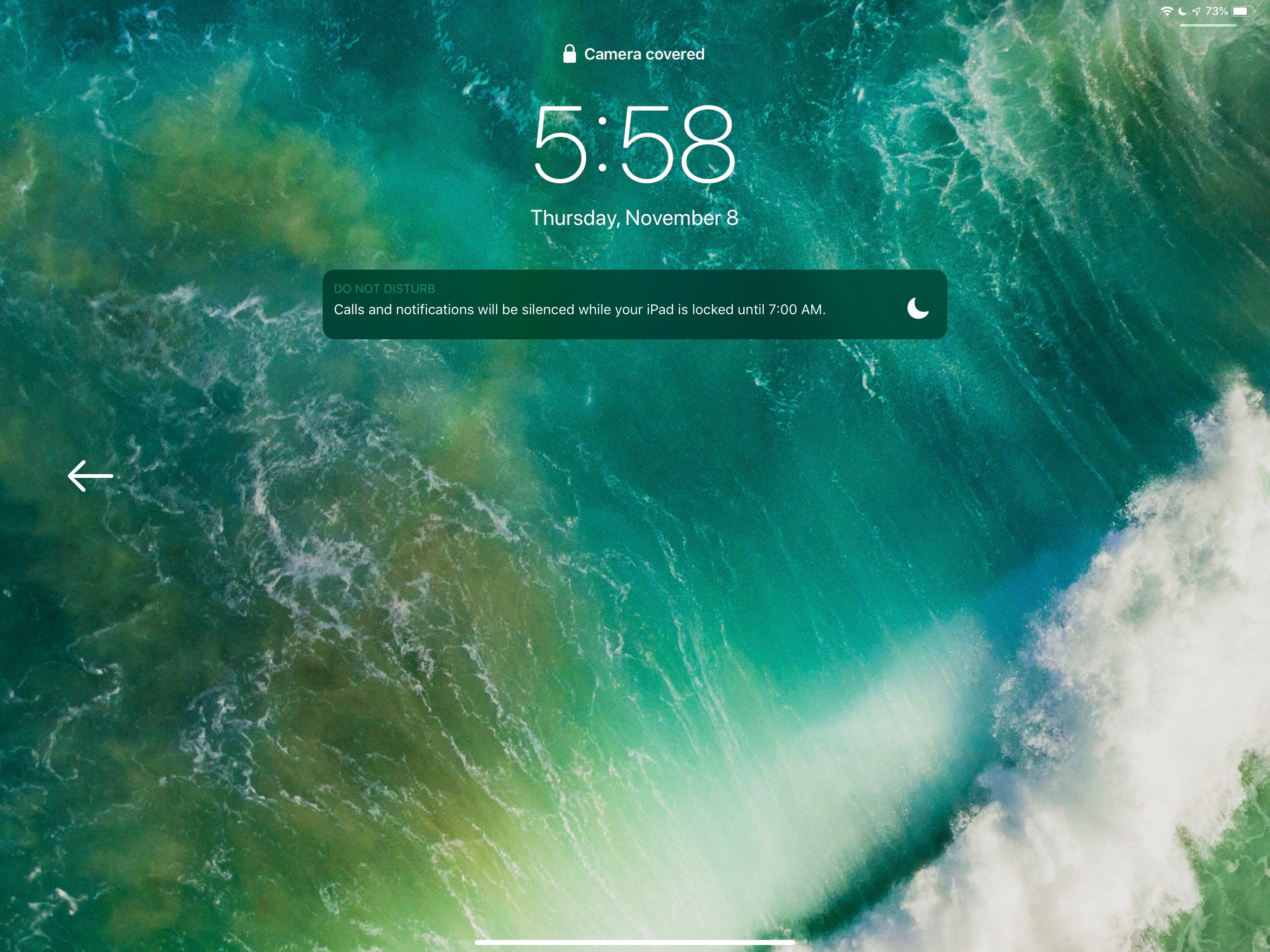 FaceID is very fast. There’s not much lag to unlocking the new iPad Pro. It’s still not as fast as TouchID in my experience but the difference is so slight that it’s not a reason to avoid the new hardware. For apps that use FaceID to unlock, like DayOne and now Notability, FaceID really is more convenient than TouchID with an iPad Pro.

Using the new swipe from bottom gesture on the iPad is somewhat more tedious than on iPhone simply because it overlaps with the multi-tasking gesture. It’s a multi-stage gesture to exit or switch apps.

The gesture works 100% of the time for me. It’s effective but it’s slower than double tapping a home button.

Unlocking with FaceID on iPad Pro is also now two steps. Tap the screen and then swipe to unlock. I don’t think this is all that bad and it definitely prevents accidental unlocks.

I can’t believe this has received so little attention. The iPad Pro is now useful for typing when sitting on the couch. The old Origami mechanism for supporting the iPad was unstable and awkward. The new keyboard case is rock solid and very easy to convert. Everything feels improved to me.

The new keys feel like they have more travel and click to me. I’m sure this is a result of being a new keyboard instead of some new design. I type a lot on my iPad and I’ve worn down some of the elasticity in the keys. It feels good having a new keyboard.

I’m slightly worried about the keys rubbing against the screen of the iPad Pro when it’s closed. I’ve had crappy Windows Dell and Lenovo laptops where the keys touch the screen slightly and they wear marks on the screen. I doubt the glass on an iPad Pro is so sensitive but it’s a surprising decision by Apple to have these two surface touch.

Converting the Smart Keyboard from closed to a typing position is much easier. However, the magnets are so strong that it’s harder to convert from typing to closed. All in all this is a much better keyboard experience. The two positions are nice. The more vertical position is actually perfect for reclining in an armchair and browsing the web.

A lot is being made of the new chips in the iPad Pro line. It’s simply not noticeable to me. It already felt fast and now it also feels fast still. I’ve used Procreate, Photos, and Pixelmator. They are all just as fast as they were before.

With the iPad Pro, Apple is many years ahead of most of my use cases when it comes to CPU performance. The Pro CPU is more than I need but I’m happy there’s some headroom for me. Safari loads as fast as it did last year. Most of my processor is busy trying to load web cruft when I’m using my iPad.

This new iPad Pro is solid. It’s probably not enough of an improvement for any casual user. I use my iPad every day for things like writing, notes, and task management. This is a good upgrade for a core tool in my work. If you spend more than 1-2 hours per day with an iPad then this is a good upgrade. If you don’t care about a keyboard or the Pencil then don’t rush out to get it. The 12.9" is still very big and nothing like a legal notepad.