The HomePod isn’t a complicated device to use. In fact, it can be frustratingly simple. My initial setup met my expectations for all new Apple hardware. It’s elegant, simple, and it feels like magic when it works. 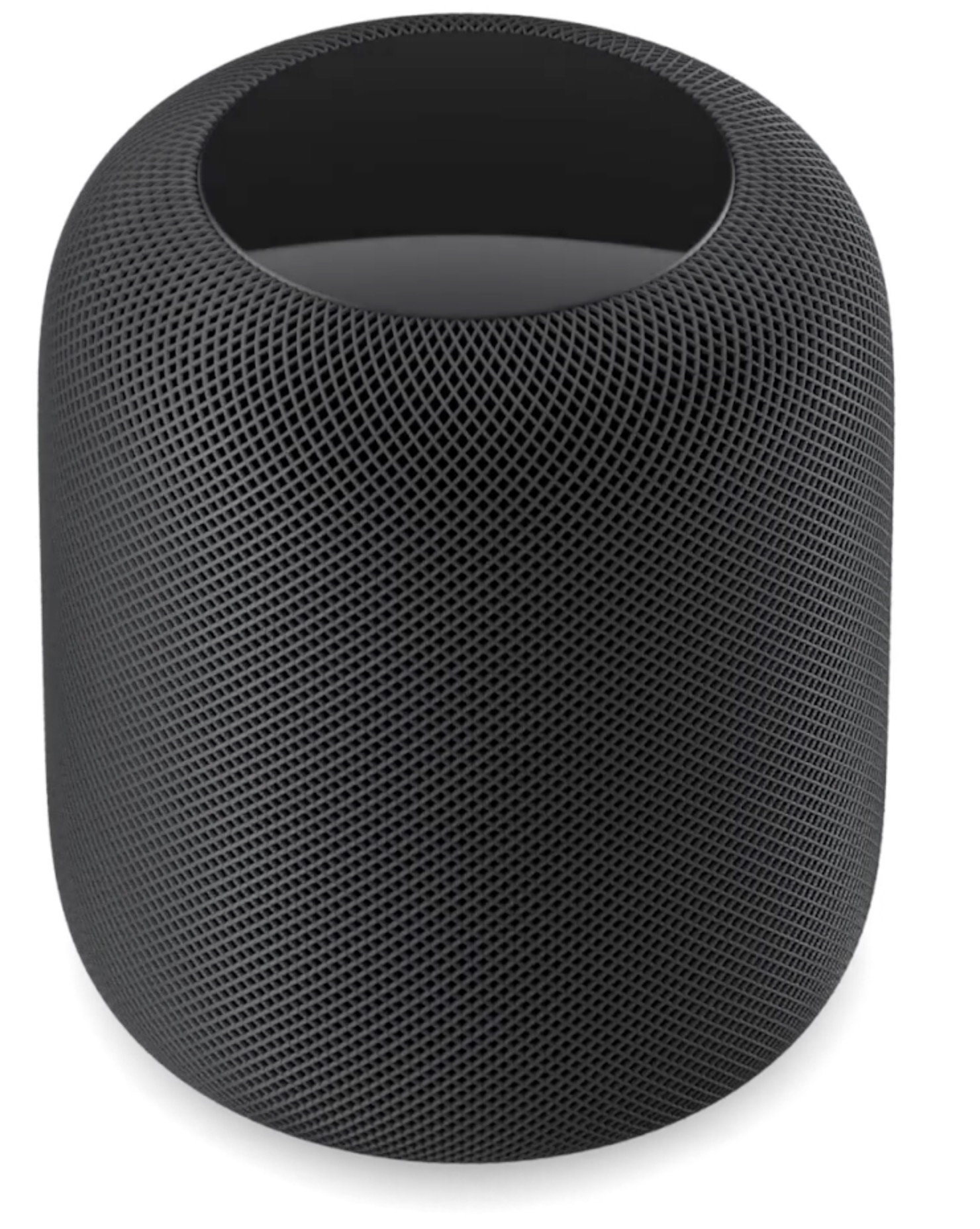 With that first juice of electricity, a new HomePod quickly latches onto an adjacent iPhone. Its first moments of life are a bit pedestrian, which is a relief from most of my other technology. The HomePod retrieves WiFi settings and user profiles from the iPhone and that just leaves the user with a simple task of testing their own competency at speaking a command to play music. HomePod wisely created a playlist of my favorite music as a test. Who doesn’t enjoy a playlist made from their own favorite songs and artists?

From the start, the HomePod is simple, with all of the complexity, controls, and options hidden from the user. I mean literally hidden. The controls on the top of the HomePod are nearly invisible and amount to little more than a plus and minus symbol for volume. The real meat of the HomePod control is only available in the Home and Music apps on an iPhone.

The HomePod was automatically added to my Home app. I already had a few HomeKit devices in my house but almost never used the Home app. For my Hue bulbs I preferred the Phillips Hue app. To get at the HomePod settings I tapped the HomePod tile in the Home app and then tapped “Details.” From there I could adjust the few settings available in the HomePod. I think most people will care about the “Use Listening History” option. I chose to allow this but if you don’t want your kid destroying your Apple Music recommendations with HomePod requests then you may want to change this.

It still feels weird that access to HomePod is through the Home app. Although many settings are available as voice commands, I think this points to Apple’s vision of the HomePod as a home control hub and not just a music player. I can get behind the HomePod as a home automation device, but if Apple is serious about the Home app being a portal to the device, then these blank stares from the app need to be refreshed.

Music control on the HomePod is available through the Music app instead of the Home app. This feels a bit more natural but can also be somewhat confusing. I never really used the Music app for multiple sources and it was a nice surprise to see how well this is integrated into iOS 11. I pulled down Control Center and tapped the AirPlay icon on the music control to see all of the destinations I could play to. Tapping each one brings up controls that allows me to change them independently.

This is different from using the AirPlay controls for my iPhone to play to other devices. That’s also possible with the HomePod.

One of the surprising discoveries for me was how well Siri works on my iPhone to play music to my HomePod over AirPlay. Siri on iPhone can also be used as remote control for the HomePod with options to start, stop, skip, and adjust volume.

I quickly adjusted to using the Music app to control the HomePod (when not using my voice). The same details and controls available when playing on the iPhone are there when playing from the HomePod.

Having access to my entire music collection, including playlists is really great. I didn’t pay for Amazon Prime Music so we often could not play songs we wanted on the Echo with a simple voice command. The HomePod finds music like a champ.

Now on to the two things that make the HomePod worth the money for me: The speakers and the microphone.

The HomePod sounds good. I own several Sonos speakers and I think the HomePod sounds much better than the Play:1 and slightly better than the Play:5. The low-tones are fairly pronounced but don’t vibrate the speaker and the highs don’t sound like a tin-can. We’ve been using an Amazon Echo and an Amazon Show around the house and my family immediately preferred the HomePod for music. I didn’t even have to convince them to use it.

What I find the most impressive about the HomePod, even more than the great speakers and the small size, is the incredible sensitivity of the microphone. I always felt like I was yelling at the Amazon Echo, but not with the HomePod. I can speak normally, even when music is playing from across the room. We have an open format kitchen and living room. From the other side of the space, and not looking in the direction of the HomePod, I can issue commands in a conversational voice. It’s still shocking that it works this well.

I was even able to give a voice command to the HomePod from another room without yelling. This only worked when music wasn’t playing, but it’s something that the Echo still can’t do.

My history with Siri has been pretty rough and I’d call myself a realistic fan of Alexa on the Echo. I like using voice assistants but they are nowhere near good enough. They are still an impressive toy, even if they aren’t vital.

My kid and I took turns quizzing our robots. We started with some relatively difficult fact-based questions. We already knew both devices could give us the weather or tell us how to spell a word. We wanted to see how it handled some things that were more difficult to search for on the internet.

“How long is Massachusetts”

Siri gave me the elevation while Alexa correctly gave me the length of the state. It’s a weird fact but point goes to Alexa.

“How tall is Glenn Close”

Both got this right. I don’t actually care about Glenn Close but it seemed like a fun question.

“How old is the oldest human”

“How many calories in a gallon of mayo”

Siri couldn’t answer. Alexa tried to explain to me that gallons measure volume and can not be converted to calories.

“How many calories in a gallon of mayonnaise”

Siri provided the answer as 15,511 dietary calories. Alexa, once again, tried to explain units to me. I thought it was interesting that the contraction for mayonnaise, arguably more commonly used than the full name, is what threw off Siri.

“How long would it take to drive to Worcester Mass”

Both Siri and Alexa got this right and included adjustments for current traffic. Siri went the extra mile and indicated the primary highway it was assuming for the trip. This is both useful and impressive. It’s useful because Worcester has some excellent beer bars. It’s impressive because it understood one of the most difficult to pronounce city names.

While Alexa provided a song and album art for the Harry Nilsson song, HomePod simply told me that wasn’t something it could do. If you were hoping Siri could help you with a bellyache, you’d be wrong.

For basic math, something that is surprisingly useful around our house, both robots gave accurate answers without needing any clarification. For multiple operations Siri and Alexa processes from right to left. Both are also annoyingly verbose and repeat the calculation with the answer.

We asked both robots who played Elasti-girl in the Incredibles. Siri tried to find a song and Alexa simply told me it didn’t know.

My kid was in charge of asking for jokes. She preferred Siri’s dumb jokes over Alexa’s but both paled in comparison to her father’s.

Then there are a few things that Siri on the HomePod is much better at. Most of it has to do with Apple services so it’s not a big surprise. Siri was much better at telling details about upcoming calendar items, like start times.

“Hey Siri, what time is golf this weekend”

Siri gave me the exact right time from my calendar.

“Hey Siri, make a note that the couch is 72 inches long”

Being able to take notes with the HomePod is pretty wonderful. I find that even more useful than Reminders, which also works well.

Siri on the HomePod is unable to access all kinds of personal data. It refused to tell me how many steps I walked or how far away my wife was. I can appreciate this extra layer of security even if I kind of wish it could do it. Siri on the HomePod also can not start phone calls, which seems like a good idea when I consider that anyone in my house can use the device.

I’ve been far more impressed by a Siri constrained to voice responses than Siri on my iPhone. This assistant provides more valuable feedback when it can’t simply show me a list of Google search results or a Wikipedia snippet.

The one major gripe I have about Siri over Alexa is the extra effort to say “Hey Siri.” It seems minor, but I forget the “hey” part regularly and then have to repeat the request. Siri also adds a lot of filler words in the responses. These lengthen the response without providing any value. I’d rather have Siri say “I don’t know” instead of “Sorry, I can’t seem to find that.”

I’ve read complaints that “Hey Siri” triggers multiple Apple devices in the same room but this has never happened to me. My iPhone will often light up when I issue the command for the HomePod but the HomePod always wins. I suspect this was fixed with the recent AirPlay 2 update for the HomePod and I’m benefiting from that now.

Home in the HomePod

While it felt weird to use the Home app to change the HomePod settings, I now see where Apple might be headed. The HomePod can act as a hub for HomeKit enabled devices and is obviously a great voice control device for these devices. With iOS 12, Siri can become an automation hub for my entire house.

I’m still not a power-user of the Home app. It feels confused. It feels sparse and cluttered at the same time.

After connecting and configuring my Hue bulbs and hubs with HomeKit I started arranging my “House” with rooms and zones. I have no idea why I would want different zones but now I can turn on lights or set scenes in different rooms using HomePod. I was able to do this with the Amazon Echo already but because the HomePod microphone is so much more sensitive, it feels more natural asking it to adjust the lights when I walk into the room.

The HomePod was a gift. I wouldn’t have bought it for myself. But I love it. Within a day I already wanted a second HomePod. Within a week I had stopped using my Amazon Echo devices.

I plan to replace all of my Sonos speakers with HomePods. I’m in no rush but I think Siri automation in iOS 12 will further catalyze this change.

Unlike every other Apple device, I think the marketing for the HomePod is the worst part of the product. While the purpose of the HomePod is right there in the name, Apple seems to be selling this as a high-end speaker instead of a home assistant hub with an endless music catalog. Maybe that will change with iOS 12 and Siri improvements.