I’ve used the Orbi WiFi system for several months. With the demise of the Apple wireless base stations I figured this was a good time to write about it. Let me start with two disclaimers:

Mesh networks have become consumer products. I ran my own Frankenstein’s monster of a network before buying into the Orbi lifestyle. An Apple AirPort, Linksys, and Synology wireless router all ran with the same SSID and password. This allowed most devices to seamlessly move between areas of my home without losing a connection.

One day I decided I really needed a way to toggle on a guest WiFi to allow for occasional use by visitors without having an always on shadow network. That was a pain with three different routers. After some research, I ruled out the Eero and ruled in the Orbi by Netgear. The three station package is $287 on Amazon. This is considered enough for a pretty huge house or a house with an unusual floor plan.

The initial setup was a breeze. I used my iPhone to connect to the primary base station and followed the on-screen instructions for setting the network details and passwords. The next step didn’t go as well.

Once I turned on the second Orbi satellite the Orbi iOS app crashed. I tried on my iPad… crash. I visited the forum and realized this was not an uncommon problem. There was no clear solution and Netgear has apparently never visited their own forum. So I posted the obligatory 1-star review on the iOS app store and then got down to experimenting. It didn’t take long to stumble on the curiously vague option to connect to the Orbi from a browser on my Mac (at orbilogin.com/index.htm). From there I could add the other satellites and once they were paired with the base station, the iOS app functioned as expected. 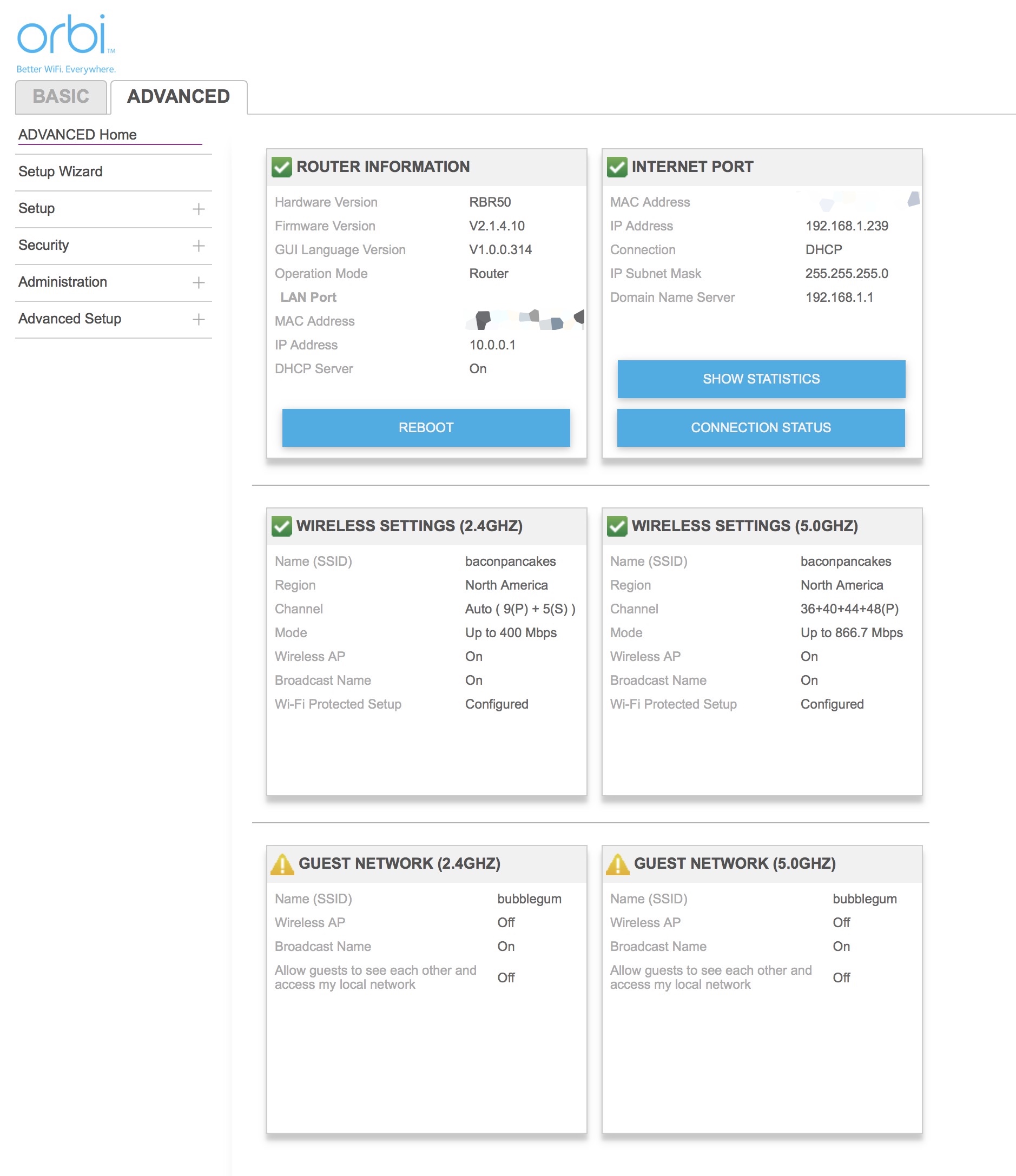 The website has many more controls than the iOS app but it’s straight out of 2005. Most of the time I don’t need to interact with the app or the website. The Orbi mesh network just works like a champ. The most common thing I use the app for is updating the firmware, which Orbi maintains with regular changes.

The app does provide some nice options for looking after the devices on the network and blocking any unknown users. The most useful feature for me is the information about which band is used by each device. I mostly use this to investigate how well the mesh network is behaving. Occasionally iOS devices will connect over 2.4GHz and refuse to join 5GHz until after a reboot. This seems like an iOS problem, not an Orbi problem. From my research, this is precisely what should happen on a mesh network. When 5GHz is too weak, 2.4GHz is the fallback. Usually this happens when I’m further from the hot-spot.

Orbi includes an optional parental filter based on Disney’s Circle technology. I don’t use this because my kid has a good relationship with technology at this age.

This is all nice, but what I really care about is how well the WiFi network performs. I’m happy to report that the Orbi mesh works great. I’ve very rarely lost a connection when I thought I should have one. The only hiccups have been caused by a certain someone in my house moving the satellite to a plug controlled by a light switch.

The guest network, which first lured me to a single-mesh setup, is just what I was looking for. From the iOS app, I can toggle the network on and even share the connection details by text message. When the guest leaves I can easily toggle it back off. I do wish I could set a timer to disable the guest network after set amount of time.

So, how’s the speed? Using the built-in Ookla speed test, I’d say it’s doing pretty good. The performance from my iPhone X is more than acceptable. I’ll also point out that these speeds were measured from a variety of locations in my house. Many of them were at the opposite end of the house from my base station.

I like the Orbi mesh so much that I also opted for the “outdoor” satellite to extend my network further. I placed this satellite in my garage rather than outside. The plug on the Orbi outdoor satellite seems like a joke. It has a massive wall-wart that prevents it from being used with most outdoor protected sockets. It was clearly designed by people that do not live in the North East or New England.

The outdoor satellite is a whopping $330. The connectors are well designed for outdoor use (except the wall-wart). Each connection uses a rubber seal to prevent moisture from entering. The additional coverage is impressive when mounted on the garage wall. The WiFi is available in my yard and pretty much every place I want to use it while I’m outside. 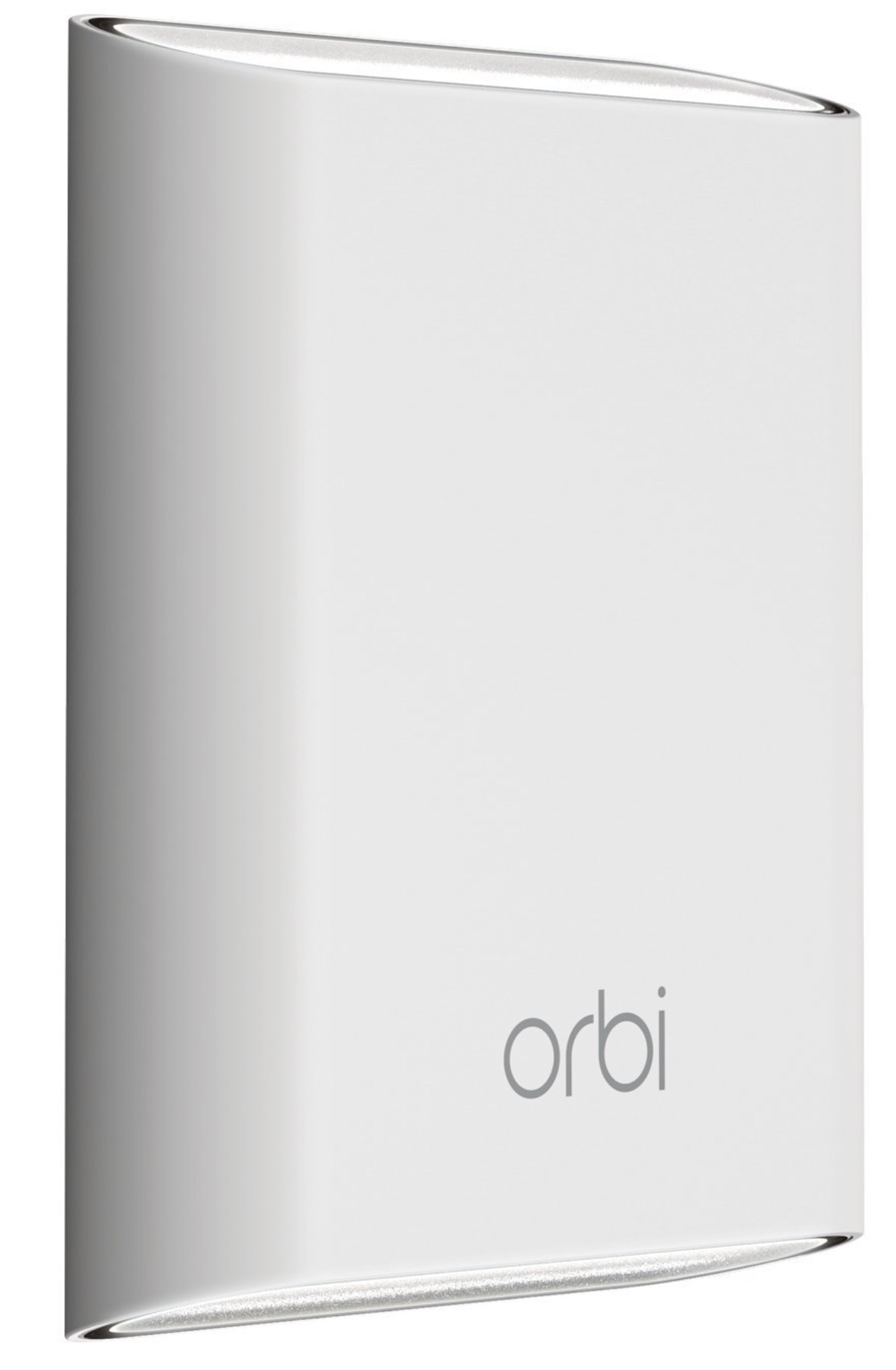