When my 10.5" iPad Pro arrived I decided to do a little experiment. You see, I honestly believe that the iPad, iPhone, and other micro super-computers are the future of computing and I want to force myself out of old-man complacency. Five months ago I committed to that experiment and avoided using my Mac unless there was absolutely no way to do something on my iPad or iPhone. Last week I ended my experiment and I have a few opinions (big surprise).

As the title suggests, the Mac still feels more comfortable for almost everything. The Mac feels less innovative and “fun” but I actually feel more relaxed when using multiple windows, real keyboard shortcuts, and a true file manager. The irony here is that the size and design of the iPad makes it more of a joy to use, but it’s also tainted by inefficiency. I do almost every task faster and more easily with my Mac than I can do it on my iPad Pro.

It’s not the screen size that makes the difference either. My opinions about computing also means that when my daughter needed her first computer, we settled on the iPad Pro 12.9 inch with its larger screen and spacious Smart Keyboard. I’ve worked on both and I can confidently say that the 12.9 inch iPad Pro is equivalent to my own 10.5 inch model. Both are less comfortable than my MacBook Pro 15 inch for most tasks.

First, a quick note about keyboards. The virtual keyboard is not sufficient for an iPad Pro. I can type on it but it is not comfortable for long-form writing. My young daughter also much prefers the Smart Keyboard for speed testing in math and writing short stories and she’s mostly unfamiliar with a Mac. Physical keyboards are still the best way to enter text into a computer.

Maybe it’s because the iPad doesn’t ship with a physical keyboard, but I find application support for keyboard shortcuts on the iPad to be extremely variable. The core cut-copy-paste is almost always available, but unlike my Mac, most applications stop there. Why consider the command or option modifier when most people don’t even have a keyboard with that key on it?

Say what you will, but in my own life keyboard shortcuts are much more efficient than tap and hold to select a popover item. iOS was built to not expect an extended keyboard and I think the experience reflects that.

Where the Mac Wins

Let’s talk about concrete examples rather than general impressions. The Mac is really good at moving information around. Drag and drop with iOS is a step in the right direction, but the Mac makes it so much easier to get a file to a destination. If I’m editing a file in one application, I don’t need to know anything about Dropbox to use it between applications on the Mac. I also don’t have to send the file back and forth to make sure my changes are saved everywhere.

Here’s an example. If I want to edit an image on the Mac, I simply browse to it with the Finder and open it with my preferred editor (usually Acorn). I can use search to locate the file or just hunt and peck. The applications don’t need to know anything about the location as long as it’s on my Mac. Applications don’t own files on the Mac, the OS does.1

This may be obvious but it can’t be overstated. Service apps on the Mac make it better. Alfred and Keyboard Maestro on the Mac have no peers on iOS. Spotlight on iOS can approximate the core feature of Alfred, but the priority of the results make it awkward and slow to get at the information I want. The Mac feels more fluid.

Keyboard Maestro is a huge value on the Mac. But if it went away, there are a half dozen other applications that can do a variety of what Keyboard Maestro does. That’s not true on iOS. Workflow for iOS is one of a kind. Without Workflow, many multi-step complex tasks would just be too tedious to endure on iOS. 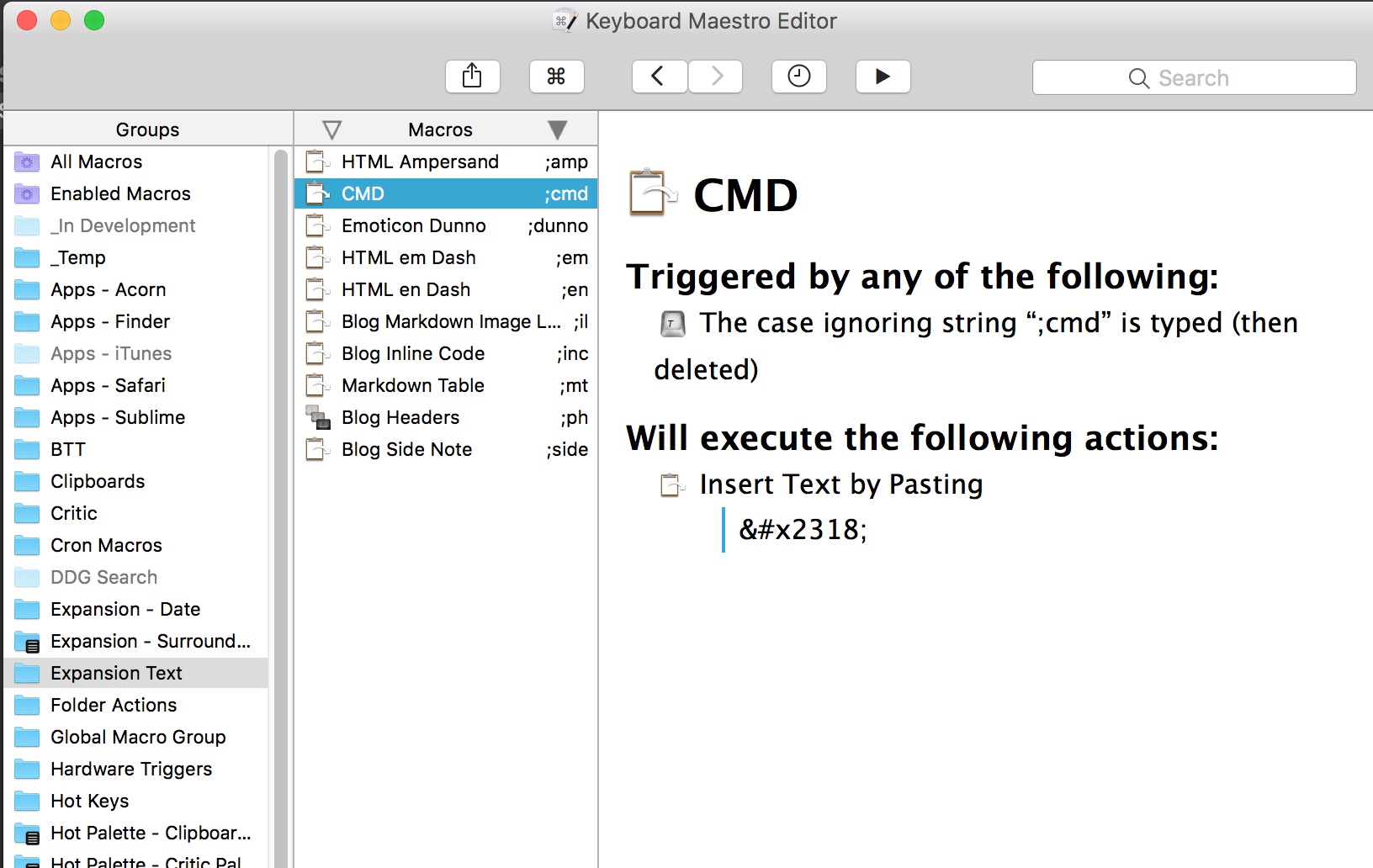 Spaces on the Mac are downright awesome. I love working in single-app mode on the Mac and it provides the same kind of “focus” that we all raved about with the iOS limitations before split-screen apps. The four-finger swipe gestures on the Mac also mean that I can easily switch between apps and groups of apps in ways that ⌘-Tab just falls flat on iOS.

I think it’s well understood now, but the quality of apps on the Mac is far above anything I use on iOS. Maybe it’s the high-quality developers that started on the Mac, like the Omni Group and Panic, but even within their apps, the quality is generally better on the Mac. Having multiple windows open for OmniFocus makes it more capable for moving tasks between projects and the inbox. The new Transmit FTP application on the Mac is just more reliable than the corresponding iOS app from Panic. I suspect that many of my failures have to do with the frameworks provided by Apple. Sharing files on iOS into Transmit regularly fails to upload them to the SFTP server. This never fails on the Mac. 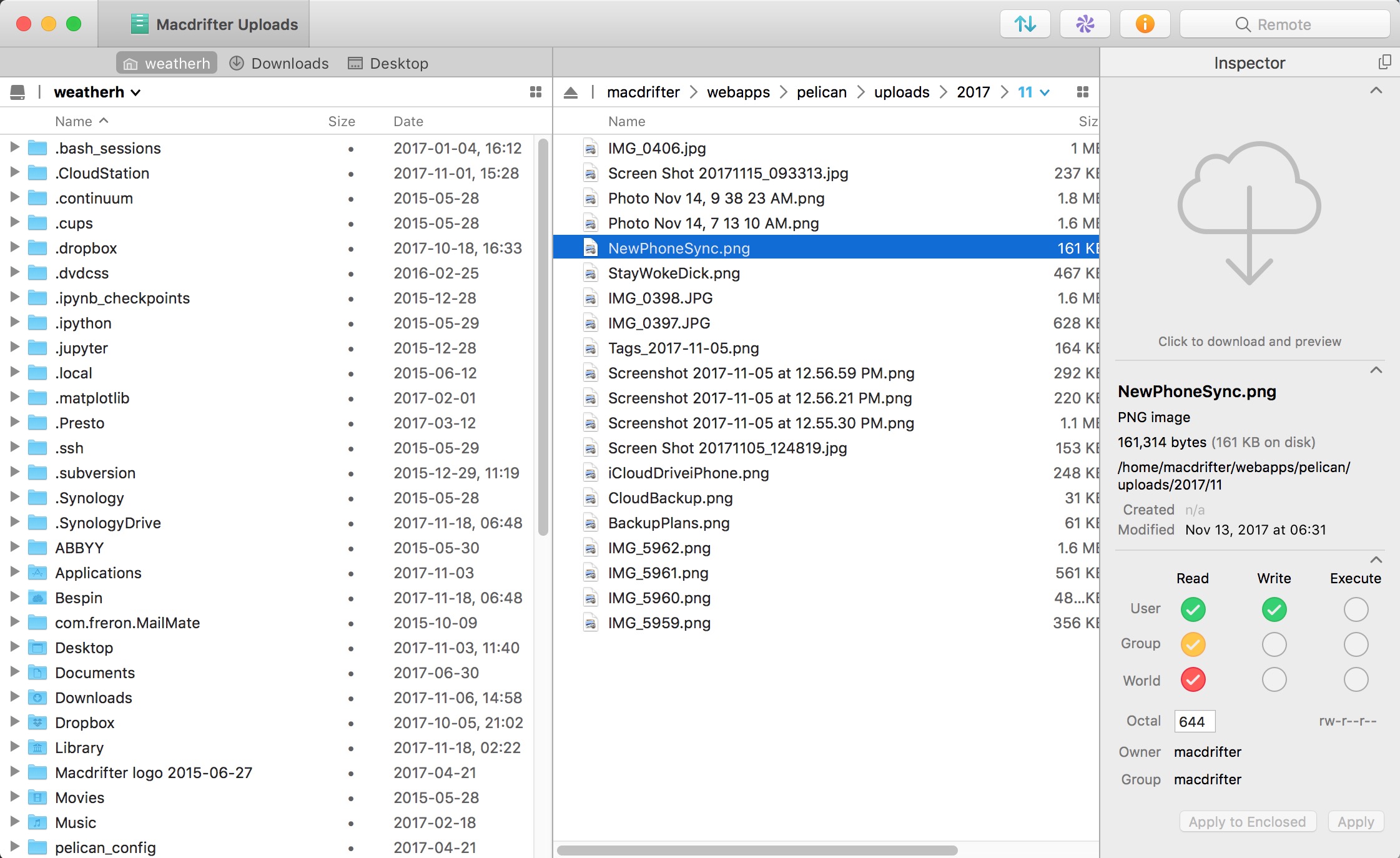 I do a lot of text editing, so this is a category where I feel friction the most. There’s really no comparison for me. Text editors on the Mac are more feature rich and I can edit faster than on iOS. I generally prefer Sublime Text on the Mac but any of my top five text editors like BBEdit, Atom, MultiMarkdown Composer, or TaskPaper are stellar options on the Mac. Virtually all iOS text editors I use make me less efficient. Text selection on iOS is slower. Moving blocks of text is slower on iOS. Switching between documents on iOS is slower. Reference checking on iOS is slower. 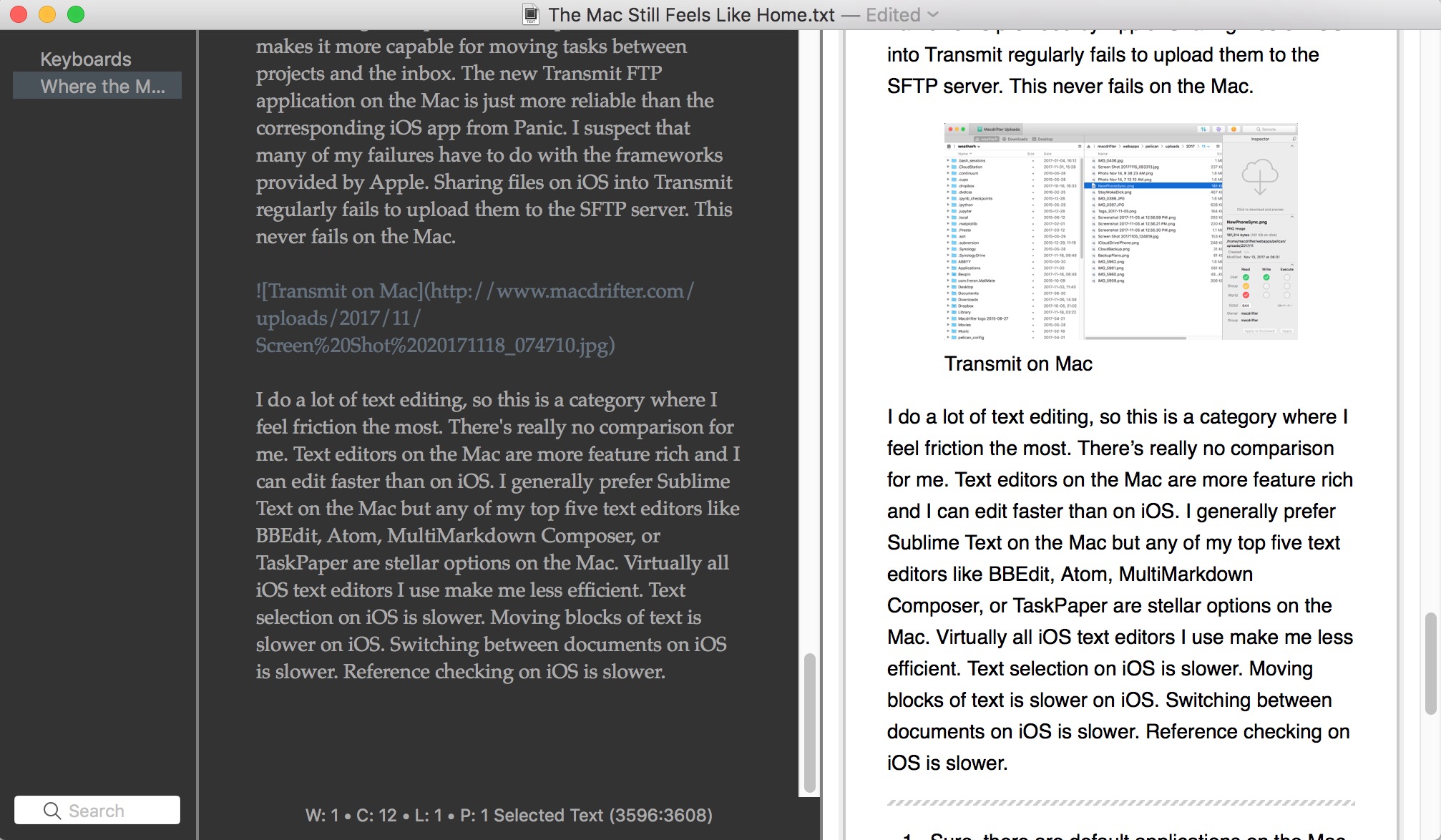 Where the iPad Wins

It’s not all bad over on iOS. In fact there are a few things that my iPad Pro is far better at than the Mac. By far, my favorite thing about the iPad Pro is the Apple Pencil. With apps like Nebo and GoodNotes I can take detailed meeting notes that include diagrams and annotations. This is so much more work on a Mac or even a Windows laptop. I love text but sometimes a diagram communicates more than words.

iPads are no longer a distraction in meetings. They are common enough that I don’t have to explain what it is or why I’m writing on it with a pencil during the meetings. Because my iPad is often flat on the table and I’m not hidden behind its screen, there’s less of a disconnect between what I’m actually doing and what the other person thinks I’m doing. The iPad is a great collaboration device in ways that a laptop just isn’t.

The other thing iOS gives me is email and calendar integration with work that’s just not supported on my Mac. The Exchange certificate management of iOS means that my iPad Pro is the only place I can see all of my calendars from work and home in one place on a big screen.

Of course, portability is the real strength of the iPad Pro. I want no other computer when I’m stuck on a plane for six hours. Don’t even try to use a regular laptop on a modern airplane dining tray. I barely notice the weight of the iPad in my backpack to the point that it’s just a peripheral part of my travel gear. The 10.5 inch iPad is the pefect size for me. The increased portability over a larger device highlights what it does well. There are times that I still miss workspaces on the Mac, but I don’t miss all the dongles and power cables or the heft of a full size Mac.