MailMate is a relatively new and very nerdy email client for the Mac. The developer is trying something new by attempting to fund future development (version 2.0) with an IndieGoGo campaign. It’s an novel and honest approach that could easily be dismissed except for two things:

I think that’s an important point. The developer is being painfully honest. If people don’t buy the app, then development will be slow and may cease.

But commercial software is capitalism. I pay for value. MailMate is value. But you’d be a fool to just spend $50 based on my endorsement. So here are a few reasons I think it’s worth the price.

We’ve all been there. You have a bunch of emails about a project. You know somewhere in there the exact thread with the exact piece of information you need is hiding. If only you could quickly see all of the threads and jump between the messages. MailMate has an interesting solution called Correspondence view and threads.

In the example above, the blue dots represent the messages we care about. The grey dots are all of the other messages in the thread. By clicking through the various offshoots I can quickly get a feel for the central discussion of that tangent. I’ve found it to be much faster than browsing through all of the messages in a single conversation. MailMate puts this information right in the main window: 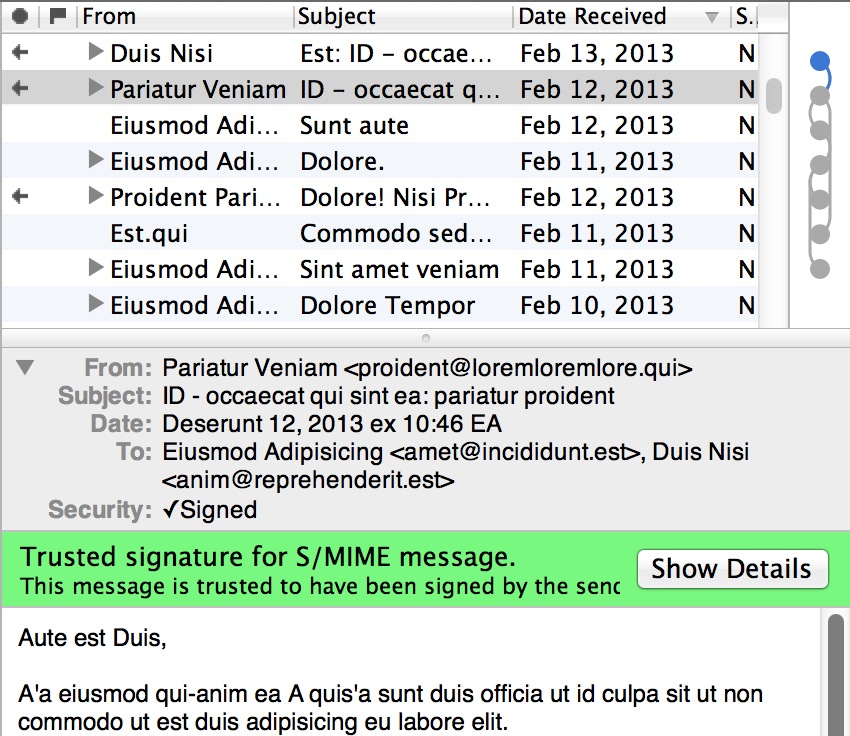 Then there is the fantastic “Correspondence View” available in MailMate. It’s a three pane view that is actually useful. Clicking on a message in the main list, the correspondence table fills with a list of all messages sent to and received from that correspondent. The messages are also grouped within conversations. This has been a great way to quickly find particular exchanges that I’d like to reference. 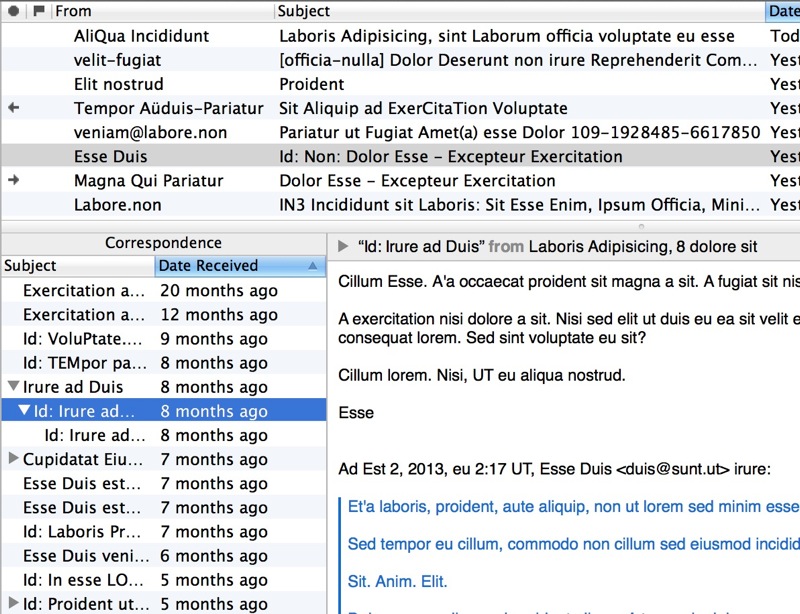 As cool as Correspondence view is, it’s based on something even more novel: Layouts. MailMate ships with several layouts that are based on an experimental feature of user editable files to define new layouts. Not happy with the current three pane view, then define one you like better.

The “Statistics” layout shows just how interesting this concept can get. Choose a parameter from the drop down and immediately see information about the correspondent and message thread. For example, here’s a statistics view that breaks down the frequency of message exchanges on the Critic Markup project: 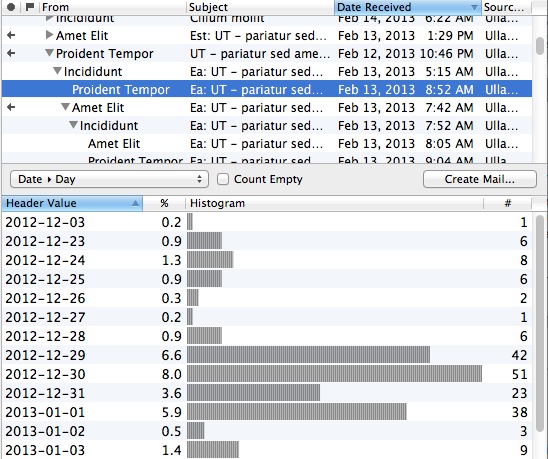 There’s been plenty written about how MailMate supports automatic conversion of Markdown to formatted text when composing messages. But that’s just kid’s stuff.

MailMate supports advanced “Send Later” on messages. Flip this on in the compose window to expose a text box. Type in natural language like a specific date or even 3 days. MailMate will happily obey and mark the message for sending in the future. 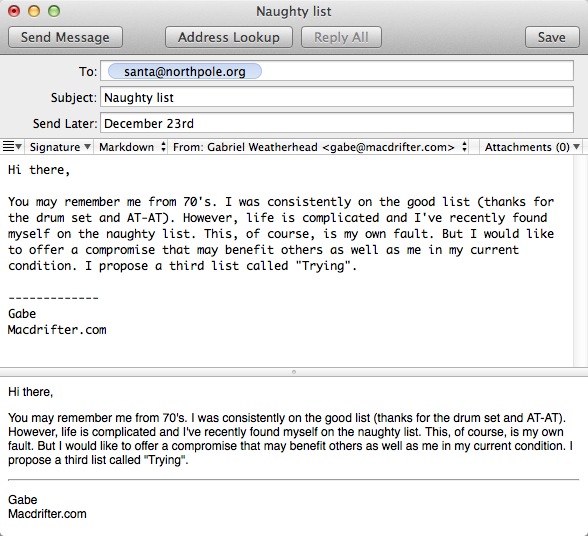 When I started to move off of Mail.app, my first concern was that I would miss my favorite plugins like MailTags, MAO and MailHub. While I do miss many of their features, MailMate makes the transition a bit easier than I initially estimated.

For example, selecting a message and hitting ⌘+Opt+T will bring up a quick-file panel. Type a matching substring to move the message right to that location. It’s not as intelligent as MailHub, but it’s still really fast. 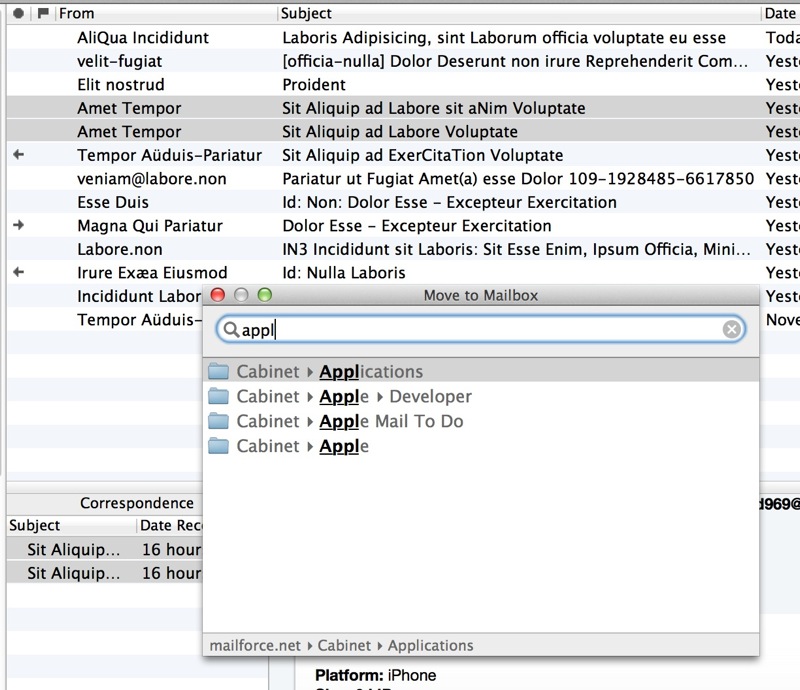 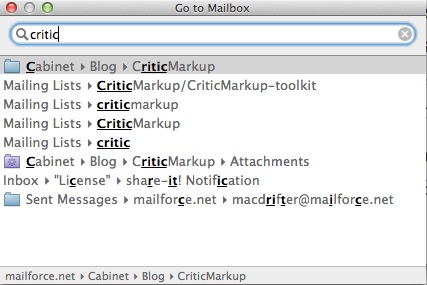 I don’t like email notifications on my Mac. I rarely have a message there that needs immediate attention. But MailMate makes the notifications useful for something other than notifying.

The menu-bar icon is actually functional. Click and take an action on one ore more messages without ever opening the email client.

You've probably noticed that many of my examples are in some form of Lorem Ipsum. That's functionality right in MailMate, called Distortion Mode. I wish more apps had this option for obscuring private information when it's just not useful to show.

“But I love the Smart Folders in Mail.app and can’t live without them.” Slow down, buddy. MailMate has you covered.

Mail Mate search and Smart Folder rules are far more sophisticated than Mail.app. Where Mail.app allows you to do things like filter based on text in the message body, MailMate lets you filter on text in the quoted text of a message body. DING!

I’m also happy with the “Submailbox” option for rules. This option controls the grouping of results in a smart folder. For example, I created a smart folder for all messages that contain the words “license” or “registration” and grouped results by the “From Name”. This provides a smart folder based on a relatively generic search but is easily browsed by a specific sender. DING, again! 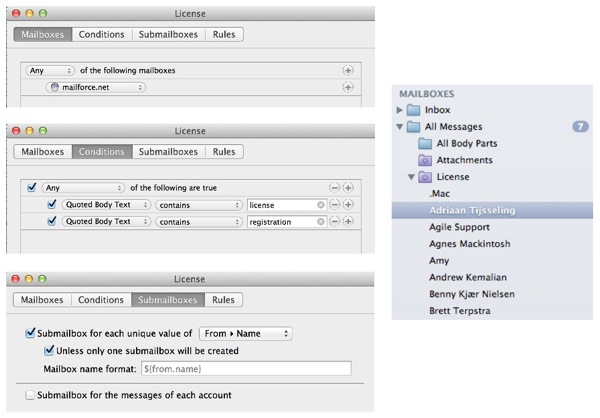 In addition to these top level smart folders, MailMate also pushes the concept forward. The application allows smart folders within folders. If you organize your messages like I do, this is awesome. Create a smart folder for messages with attachments inside of a project folder. 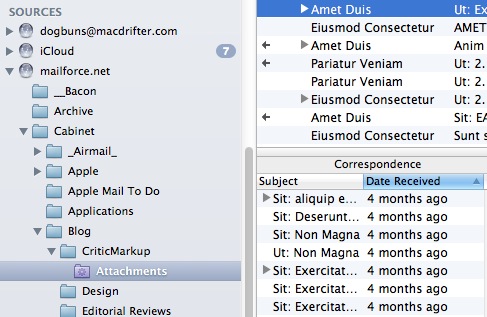 You can create smart folders at any hierarchy and have it apply to just that folder and sub-folders. This is how smart folders should work. They stay out of my way until they actually matter and they only show what I care about.

I think MailMate respects the user more than any other mail client I’ve tried. It just makes everything easier. My favorite example is found in the right-click option for a message or text selection. Right click on a message to view it in Mail.app. Right click on some selected text to instantly perform a search in MailMate.

If you want to see why I care about getting to 2.0 of MailMate, then look no further than the experimental “Command” feature. Want to send a message to OmniFocus or add a Reminder? MailMate is on it.

There are also the very beginning of Event Scripts in MailMate. The language is still under development but it shows a strong potential future I’d like to see. For example, the Markdown conversion that happens when you send a message uses the event scripting to run the message through a Python script. That’s a powerful convenience. MailMate gives me hope.

I’ve come to the end of me. We’ve seen great apps come and go. There are wonderful ideas that just are not financially viable without a bit of random luck. I don’t think $3 email clients are the way to move forward. MailMate is unapologetically $50. The developer is considerate enough to lay it all out. Unless there’s enough money to allow him to work on the project, it simply will not happen. He’s half way there now.