I live on the outskirts of the boonies. We lose power more than I care to recall so I’ve become familiar with finding my way through the house in near darkness. We’re clever enough to stash cheap flashlights around the house but I decided I wanted an “upgrade” to something that could be used to direct ships off shore.

I picked up my first Nitecore flashlight which are compact, incredibly bright and well regarded amongst photon lovers. I settled on the Nitecore EA4.1 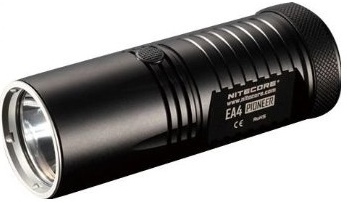 The model I chose is an incredible 860 lumen compact little flashlight.2 This thing is tiny for the level of light it produces and comes with some nice features.

The flashlight is powered by 4 AA batteries that are easy to swap out. I highlight this because several other flashlights I have are a pain to swap batteries in low light. They either require a screwdriver or another flashlight to see which direction the batteries go. My biggest complaint is that the EA4 has two pins on the cap that must be aligned to close the end cap.

The Nitecore EA4 is an all purpose flashlight with several brightness modes all controlled by a single button. Daily mode has a ultra-low, low, medium and high setting, all of which are accessed by repeatedly pressing the switch part way down.

The Search Mode, or as I like to call it Super-Nova Mode, is activated by pressing the switch all the way down and releasing within one second. This is the 860 lumen mode.

There are also two “off” positions. Pressing the power button all the way down to turn off the light, keeps the device in Standby Mode. When in this mode the device consumes a small amount of power to blink a blue light around the power button. This way, the button is easily identified in the dark. The light will flash every 3 seconds.

In the Lockout Mode, the flashlight is completely off and consumes almost no power.

Finally, there is the “Lost at Sea” mode. In this mode the light will strobe constantly or flash S.O.S. I hope to never use this mode.

The light comes with a removable wrist strap that is also nicely made. Mine came with a holster case as well. I also hope to never use this.

The EA4 is impact and water resistant up to non-idiot conditions. Drop it in the pool or down the stairs and it should still work. Take it to the Marianas Trench or launch it from a pumpkin cannon and it’s probably not going to work out well.

From 4 AA batteries the EA4 throws a massive 860 lumens of light at its highest output. It’s almost hard to explain how bright this is. In full sunlight, outside, this flashlight still throws a bright and well defined spot on the ground from about 4 feet.3

At night the EA4 at maximum output is almost disorienting. It it the brightest flashlight I have ever owned. Positioned to face the ceiling on a table, this little guy illuminates the entire room.

The EA4 is small.4 It’s about the size of a toilet paper roll and weighs 8oz. without the batteries. It will fit in a large pocket. Importantly, it fits in a narrow desk drawer too. It’s possible for a large person like me to entirely palm this flashlight. 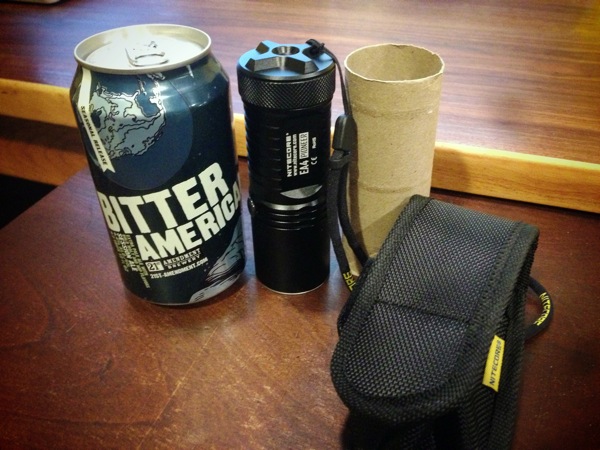 I also considered the Nitecore TM11 and TM26 briefly. They are both very expensive flashlights. The TM11 throws a 2000 lumen light and is 8in X 5in and weighs 1.6lbs. 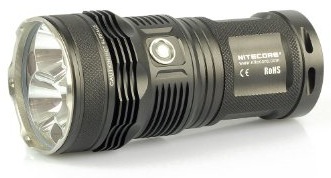 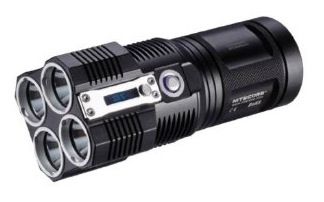 Both of these options were beyond my price range and too powerful for a reasonable person. They also use what I would call non-standard batteries. As a parent, I pretty much have AA batteries in every draw of my house.

I’m very happy with the Nitecore EA4. It’s a superior compact flashlight. It’s ludicrously bright at max output but has enough control to not blind my children or pets.