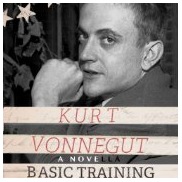 In case it has gone unnoticed, Kurt Vonnegut is one of my favorite authors. I've read every word he has released, including the private essay collections held in various university libraries.1 My opportunities for reading words on paper or glass have shrunk over the years and Audible has become my commuting companion. When I heard that there was a newly released Vonnegut short story titled "Basic Training", I immediately jumped over to Audible and clicked "Buy".

The book was written under the pseudonym "Mark Harvey" sometime in the late 1940's while Vonnegut was working in the PR department of G.E. Before working at G.E. in New York, he worked at the City News Bureau in Chicago. Basic Training takes place in and around the Chicago area.

First off, there are no spoilers in this post. I can be a jerk, but even I have my standards.

This story is one of the first K.V. composed after returning from The War. It shows but it is not central. There are brief discussions of veterans and post-war circumstances but the war plays a distant role. Vonnegut does examine the personality traits of the "war hero" and their awkward family relationships.

In Basic Training there is little of the humor and cynicism that was Vonnegut's hallmark. These characters are more akin to Salinger's lonely and indignant protagonists. There is clear a clear J.D. Salinger parallel throughout the story. While this story was likely written before Catcher in the Rye several of Salinger's short stories may have influenced this Vonnegut work.

It's a must listen for a Vonnegut fan. This story would fit right in with Welcome to the Monkey House. If you like that collection, you will like this audio book. The audio is well done but it's short at two hours. It's only $5 so it's not a major commitment. And so it goes.