Writing for Macdrifter on the iPad Pro

I write everything for this site in MultiMarkdown. Text is pretty easy to create on iOS but some of the subtleties of creating images and working with my Pelican host is more difficult than on a Mac. Here are a few of the apps I use to make it easier with the iPad Pro.

I often use Drafts to quickly start a blog post. I don't like to store text in Drafts because it's hard to get to it from my Mac. I like Drafts because it is an extensible environment. Long ago I was a fan of Editorial for iOS but it is not well maintained now.

Drafts actions uses JavaScript instead Python. I like JavaScript less and it feels less powerful but it has plenty of features to do what I need. Drafts also has a lot of keyboard shortcuts which is ideal for my iPad Pro. I can even assign my own actions as keyboard shortcuts.

While 1Writer doesn't get as much developer attention as Drafts, it has one major benefit: It works with text files and the iCloud Files app. I like having plain text files that I can get to from multiple apps.

1Writer also have support for JavaScript actions, similar to Drafts. Drafts still has more powerful actions due to the wide range of integrations with the UI. 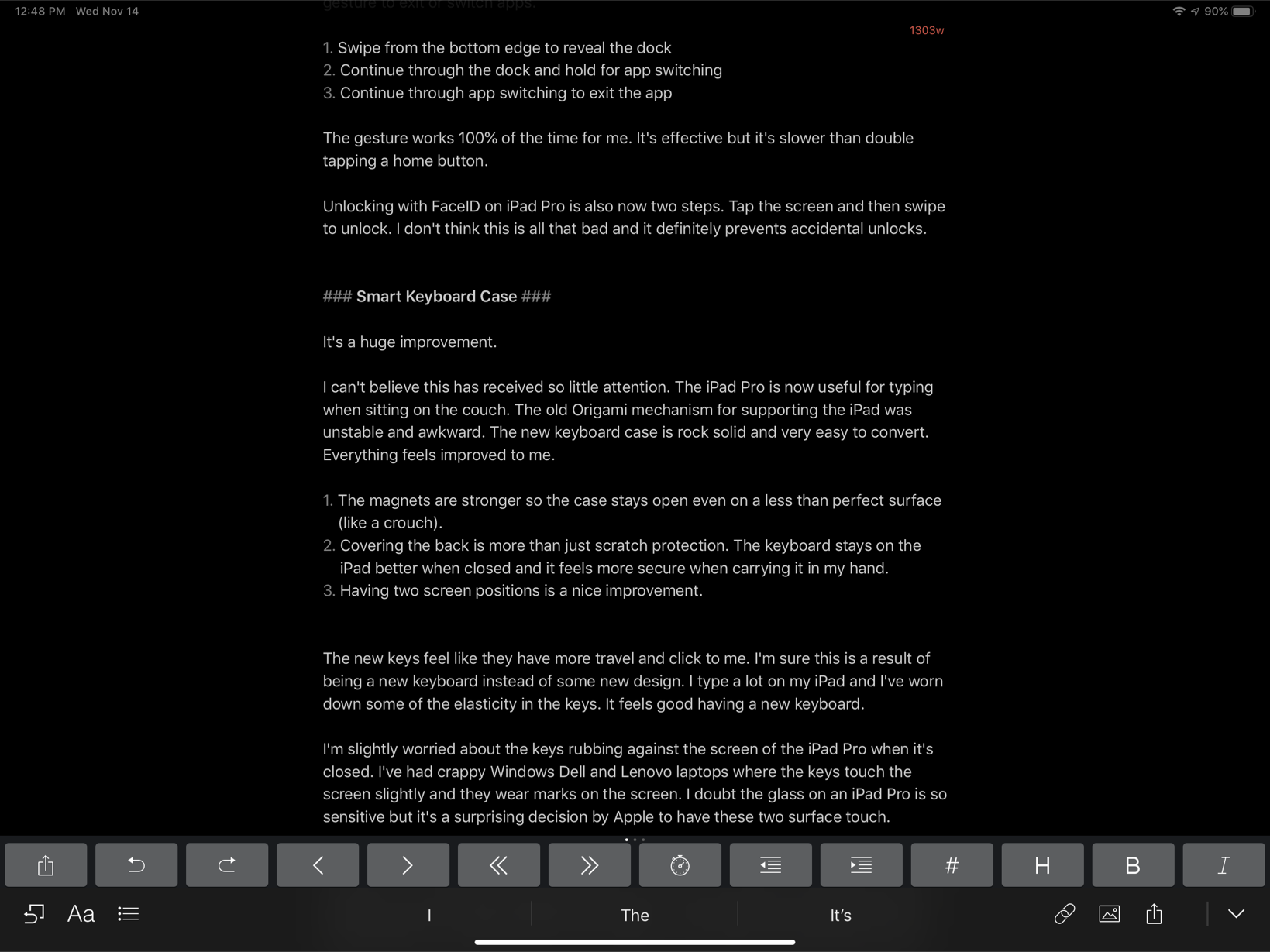 I still use Blink for creating AppStore links even though affiliate links aren't really a thing with Apple. I just think Blink is a much easier and faster way to get a good link to an app. Unfortunately Blink is no longer in the AppStore. Sorry, you missed it.

Associate by the same developer behind Blink is a very good app for search and creating Amazon affiliate links.

The screenshots I take on my Mac automatically get saved to iCloud and sync to my other devices. The images I create on my iOS devices also get sent to iCloud.

I use DEVONthink on iOS and my Mac for research. I gather reference material and sometimes related images and documents and sort them into a general topic group in DEVONthink. This is ideal for long-term storage since the search in DEVONthink is much better than search in iCloud. 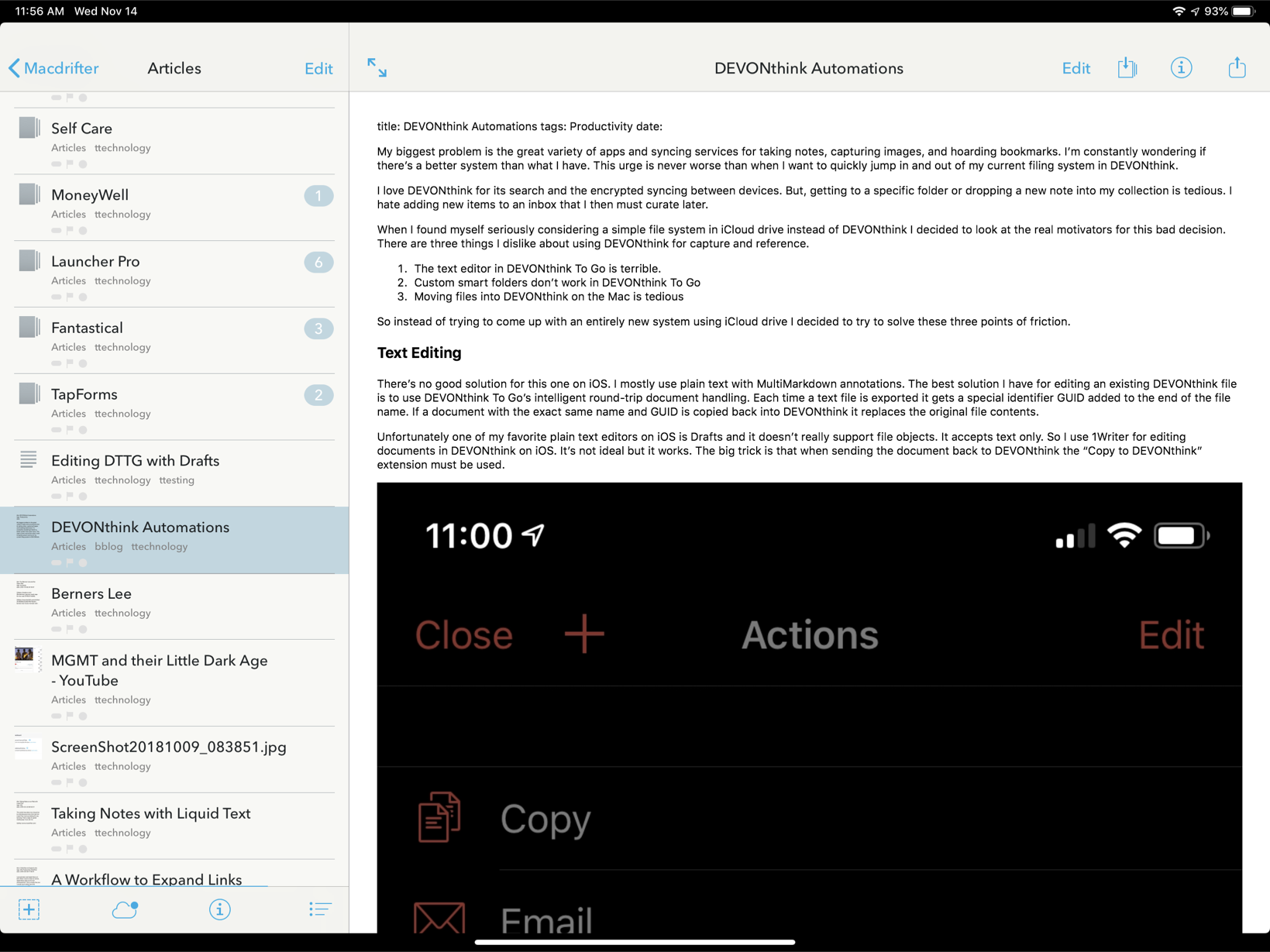 Long blog drafts are stored in DEVONthink along with the reference material. I also use DEVONthink for most of my bookmark archiving. When I want to capture a link to share I use the DEVONthink sharing extension to save it as a web archive. I've moved away from bookmarking services like Pinboard just because I prefer to own everything. Web archives also give me full content search.

I tag content in DEVONthink with "bblog" so I can filter and find these items easily.

I use the heck out of Gladys for iOS and Mac. It's a much better clipboard manager than the native iOS clipboard syncing. Gladys has the ability to breakdown an object in iOS to it's parts. For example, dragging an image from a webpage into Gladys gives me more than just a URL. I get the raw image file as well. Ever think you are grabbing an image from a webpage and then drop it on an app and get the URL? Gladys fixes that. It also syncs everything to every device. 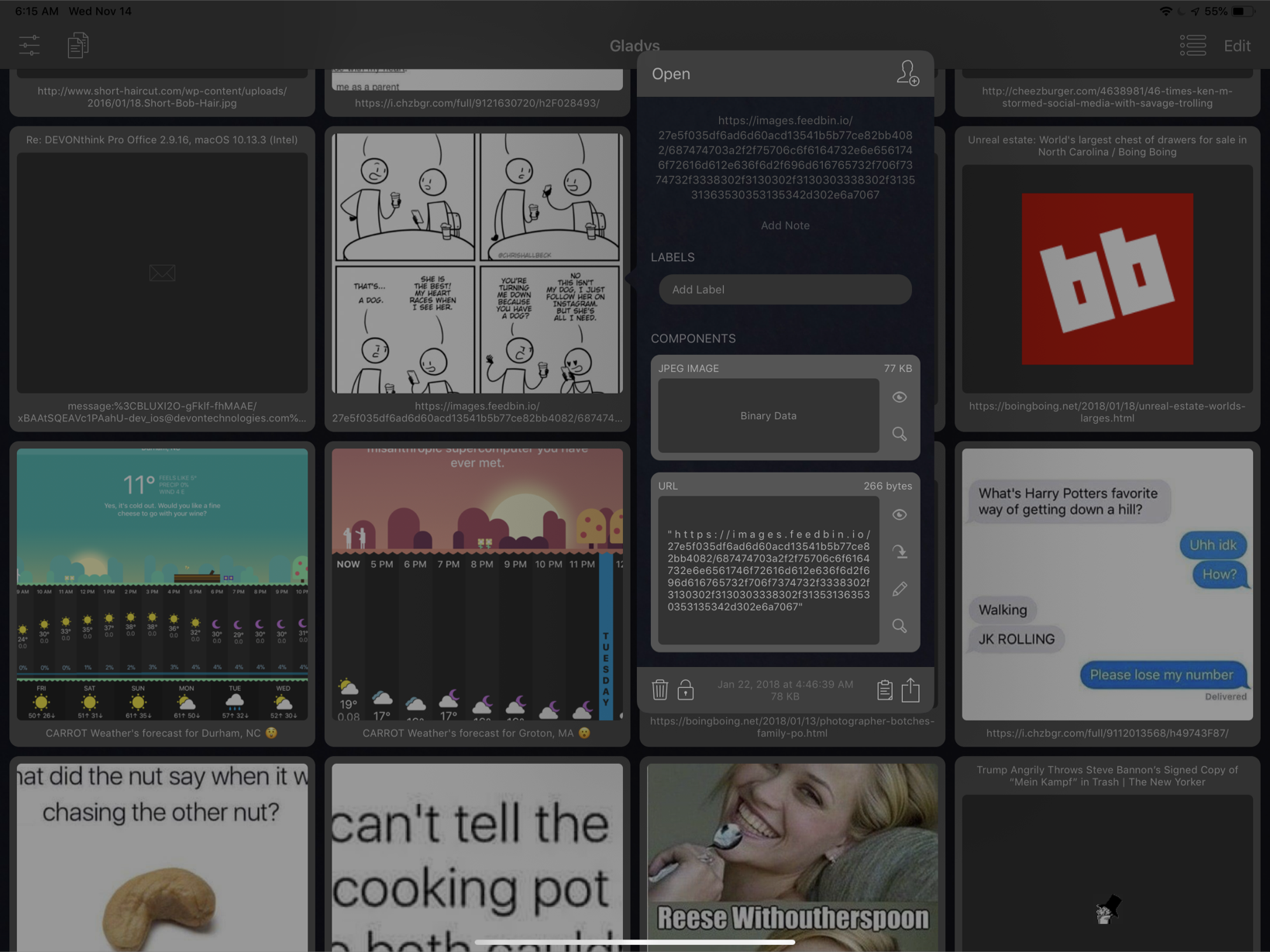 I almost always have Gladys as my Slide Over app on my iPad and I make heavy use of the Gladys sharing extension on my iPhone.

Annotable is terrific for adding image annotations and bluring out sensitive information from screenshots. I usually just save the annotated images back to the Photos camera roll for further processing.

CropSize is very good for resizing images from the iOS photos roll. In just a few taps I convert a 10MB image into something easier to load on a mobile device.

PicSew is my new favorite tool for stitching multiple screenshots into one cohesive image. It's not fancy but it works.

With every one of these image editing tools I save back to the Photos camera roll.

I publish on Macdrifter by pushing files over to the server using Coda on iOS. I much preferred Transmit on iOS for SFTP but that's no longer supported. Coda is fine but takes more steps to move files. 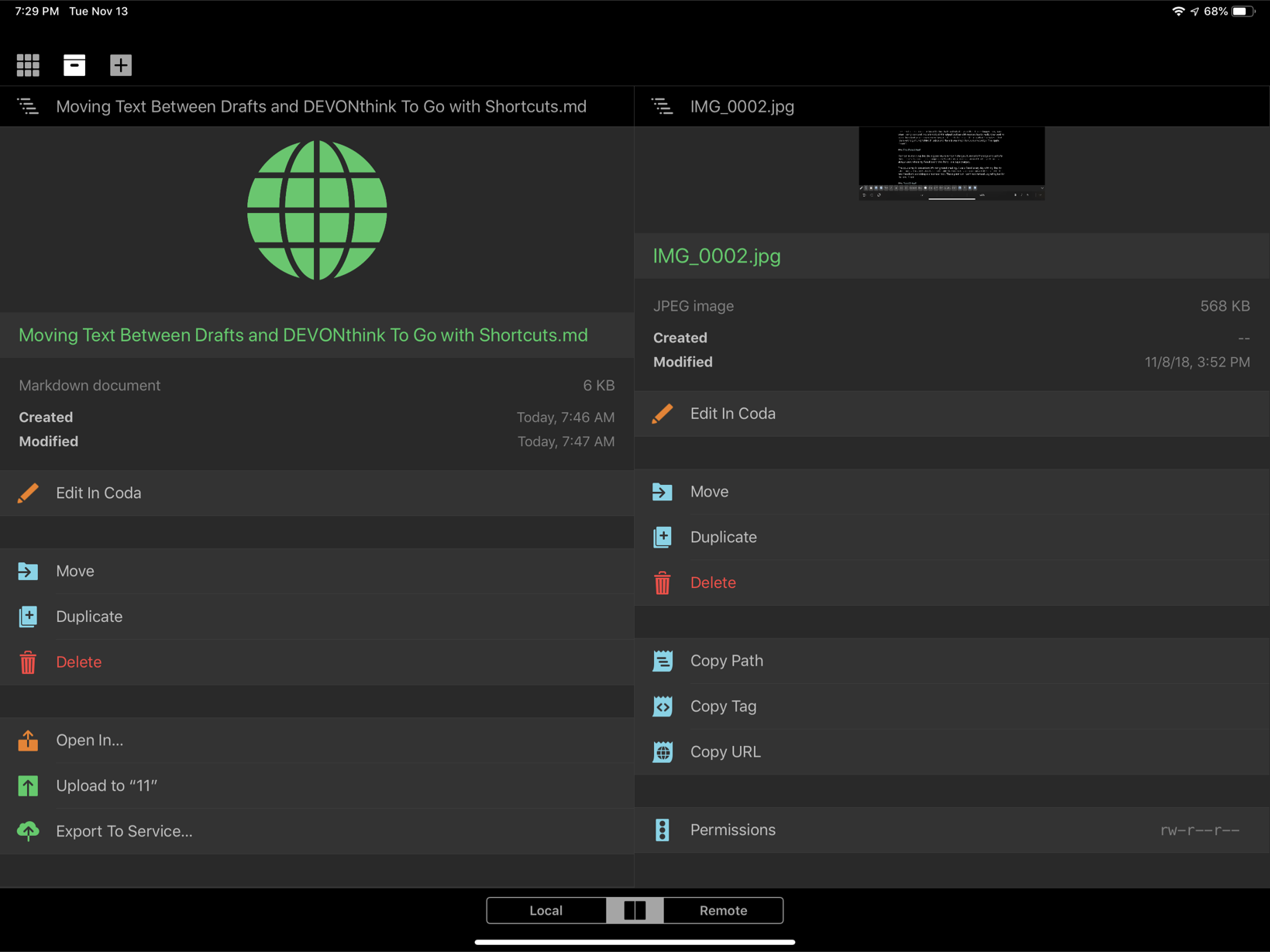 The nice thing about Coda (and Transmit on Mac) is that it uses Panic sync to keep my connection definitions in sync between devices. I keep separate location definition for the raw Markdown and the images. Coda's best feature is the option to copy a URL for any image on the Macdrifter host.

When I inevitably need to make edits to existing posts I usually also do that through Coda. Very rarely I will use Textastic with SFTP. I like Textastic but it falls into a grey area. It's not as extensible as 1Writer but it's not as good of an SFTP client as Coda. It's a great text editor though.