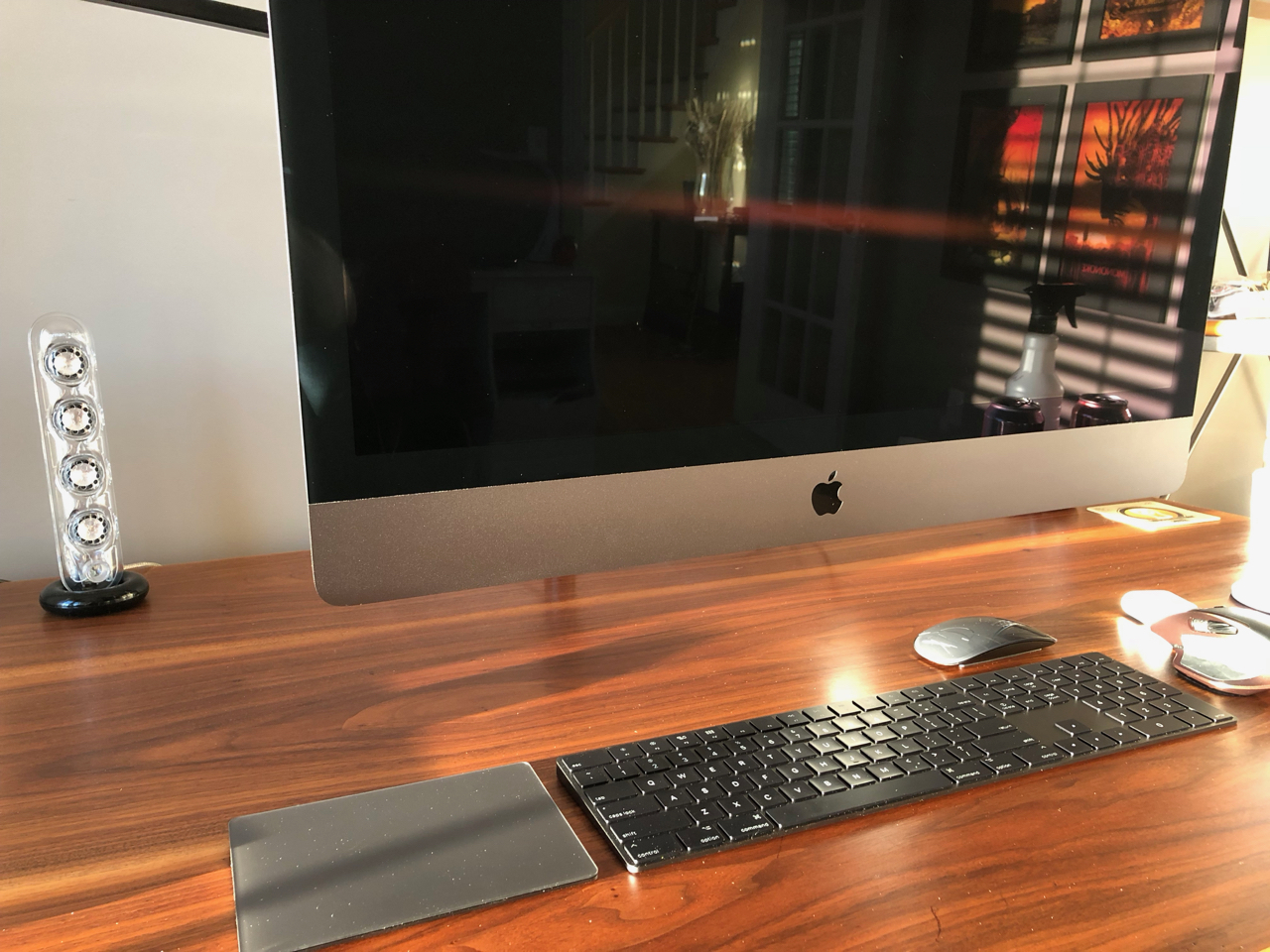 I haven’t had a desktop Mac since my late, great, Mac Pro from 2006. Those were some good times but it was also a relief when I replaced it with a portable MacBook Pro. I remember thinking that I’d never go back to having a desktop computer. Laptop computers (as we called them in the old days) had reached a performance threshold that meant they could do “real” work. Just like the kids argue about whether an iPad can do real work today, us old timers argued about whether a laptop could do real work. Until one day it could do everything I needed. Now we’re back to a point where Apple desktop computers far exceed the performance and quality of their laptop computers. I now own an iMac Pro. So it goes.

The most obvious thing about the iMac Pro is that it is silent. I don’t just mean quiet. For the first time I sit in an office where the only sounds are the tappity-tap-tap of the keyboard. I realize that’s ridiculous, but it’s a shocking change from a MacBook Pro. It’s probably less impressive to someone that only uses an iPad as a computer. But try running Logic Pro on your iPad and get back to me.

I’ll be honest. It was the silence that finally sold me. I had already done all of the technical justifying I could do and I fell asleep at my MacBook Pro late one night. When the fans whirred into action for no reason at all and woke me up, that was the tipping point. See, it’s dumb but it’s also one of my favorite things about this monster.

The 27" iMac Pro is massive. The screen space is so shockingly spacious that I almost don’t know how to use it. I’ve grown familiar to the “constrained” Retina display on a 15" Pro. Full screen apps are comical on the iMac Pro. It’s absurd to run Mail in full screen. It’s like trying to read a book that is projected on your bedroom wall. 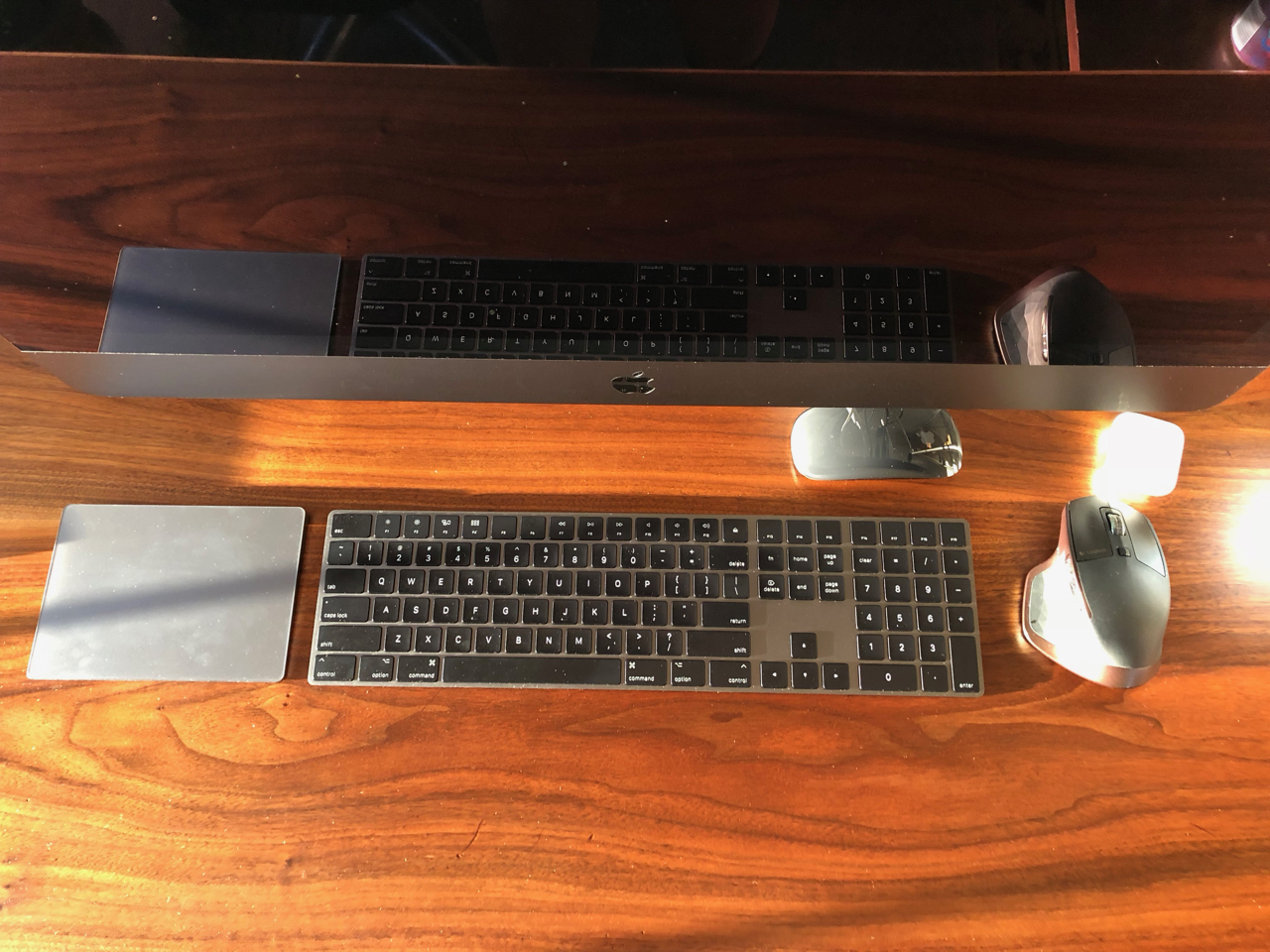 I’ve installed Moom to help with window management on this gargantuan display. I almost never want an application window to be larger than about 25% of the screen. Moom allows me to position windows more easily and also bring up window sets. This can also be done with Keyboard Maestro (which I did on the MacBook) but I need so many more options with this display that Moom is a better option.

Bartender is almost unnecessary. Really, what’s the difference if my menu bar list is six inches long. I still have plenty of free space left.

I mounted the iMac Pro on a very reasonably priced Amazon VESA arm. I often want to clear my desk to work in a notebook or use my iPad. Being able to just push everything back out of the way is great. It’s one of the main reasons to use wireless peripherals wherever possible.1 I also think it helps to take advantage of the large display while I work. Getting the screen position right (on all axes) reduces the chances I’ll end up with a stiff neck at the end of the day on the iMac Pro. 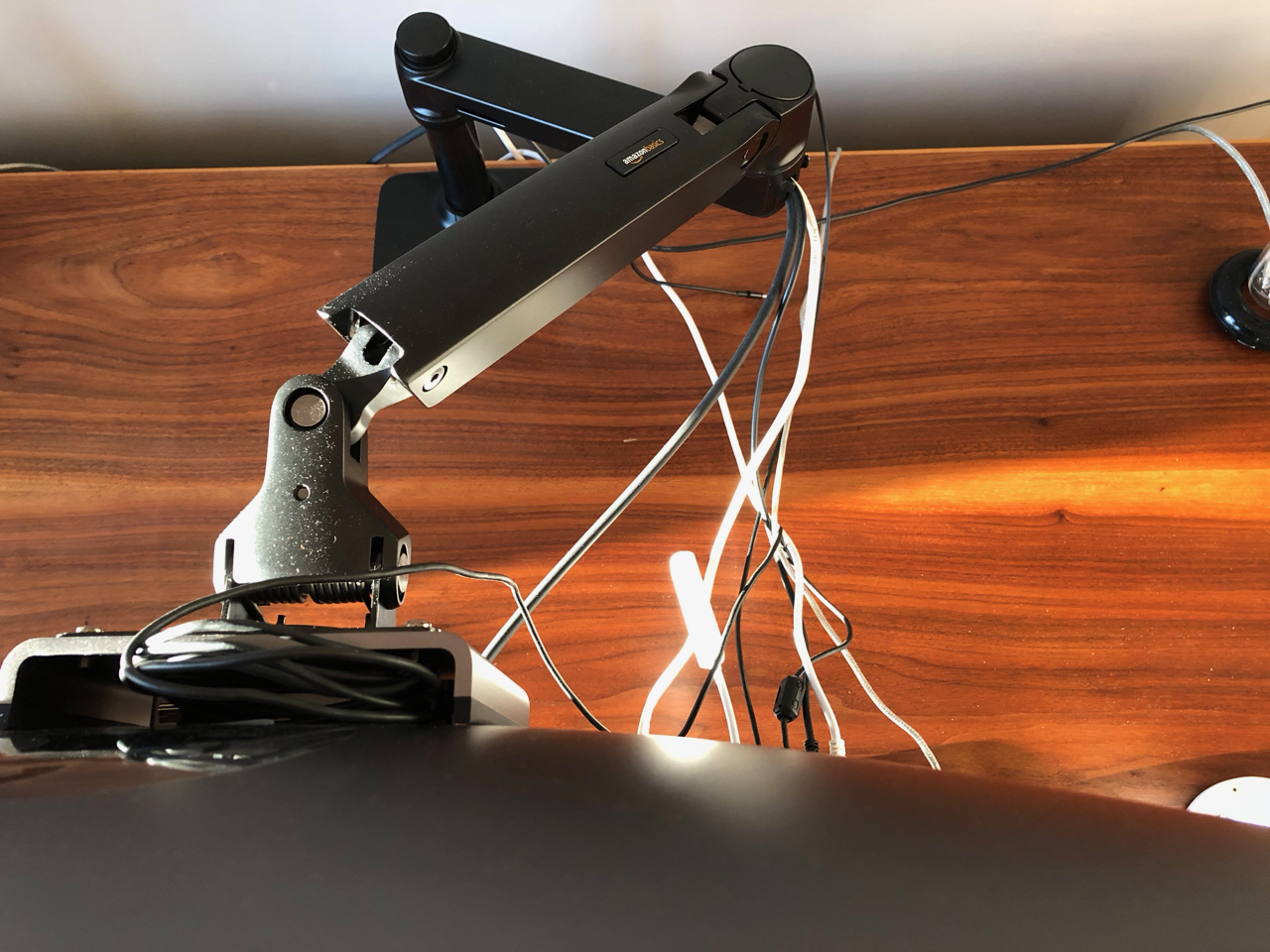 What can I say? It’s crazy fast at almost everything. I switched to using Logic Pro X for podcast editing and it’s noticeably faster than any the MacBook Pro. Importing photos into the Photos app feels much faster to me. 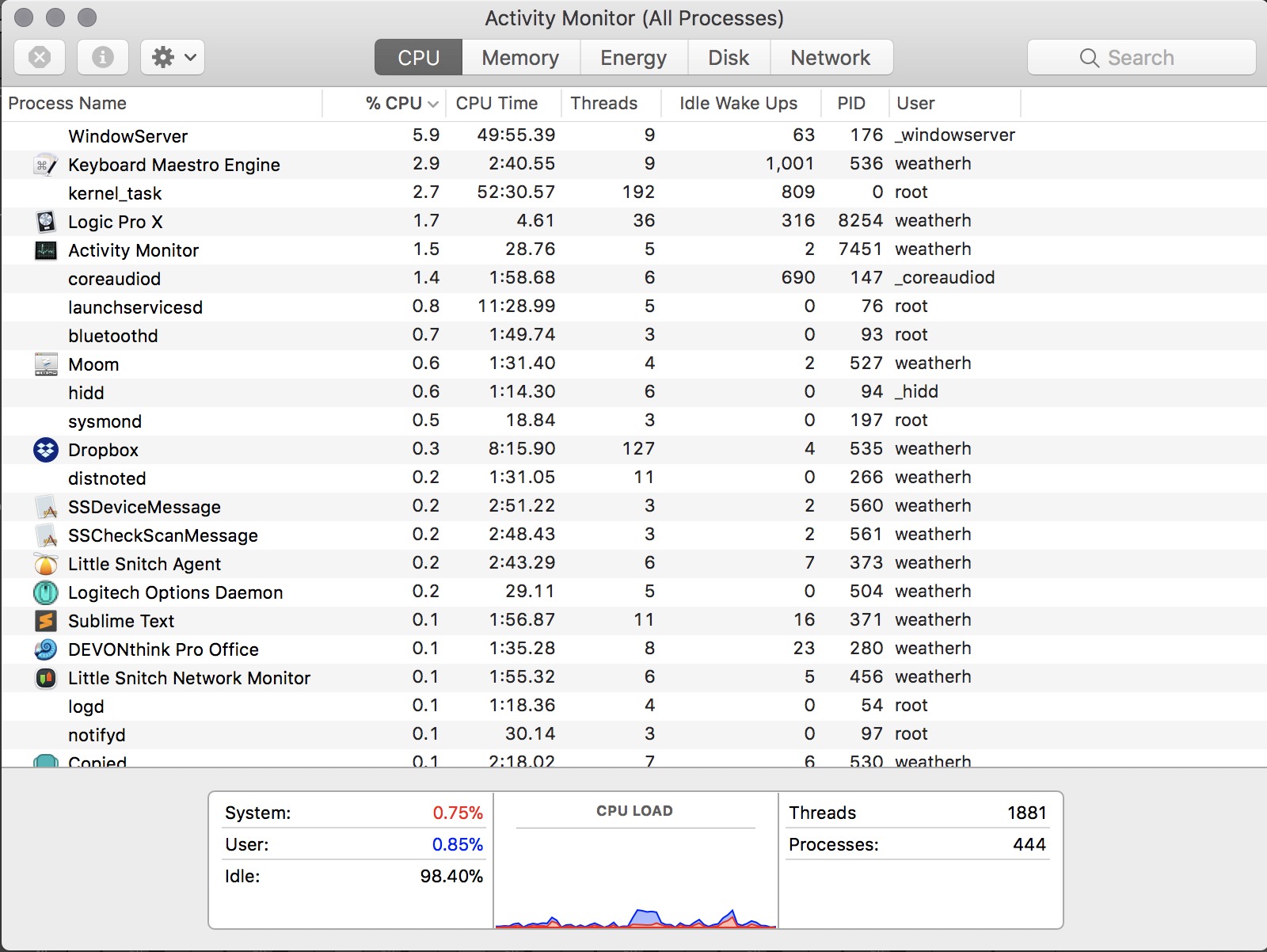 The amount of Memory on the base model iMac Pro feels spacious. I don’t worry about quiting apps. I remember when I thought 16 GB was huge. It already feels like 32 GB is just about right for the way I use a Mac. 17 running applications, inlcuding the Finder, and memory is nowhere near an issue on the iMac Pro.

There are several areas where I do feel performance bottlenecks on the iMac Pro: Boot time and Finder operations. The boot sequence on the iMac Pro takes longer than my MacBook Pro. I’m using FileVault’s full disk encryption with both computers. I also have Little Snitch installed on both computers.2 I don’t restart often so this is not a major issue.

Finder performance is noticeably degraded on the iMac Pro. File copies to and from my NAS take longer. Save dialogs also take longer to display. Even browsing to local folder can take a second to display the files. This is annoying. The Finder is pathetically out of date on macOS. I have no explanations for the difference between the two computers running the same OS version.

There may be issues with Default Folder X but the configuration on the MacBook Pro and iMac Pro is the same with worse performance on the iMac Pro.

You can only get the Space Gray peripherals at the time of iMac Pro purchase. In fact, if you want both the Magic Mouse and the Magic Trackpad that’s going to be a special order. If you want to just walk into an Apple Store and buy the base model iMac Pro, you can only get one pointing device. 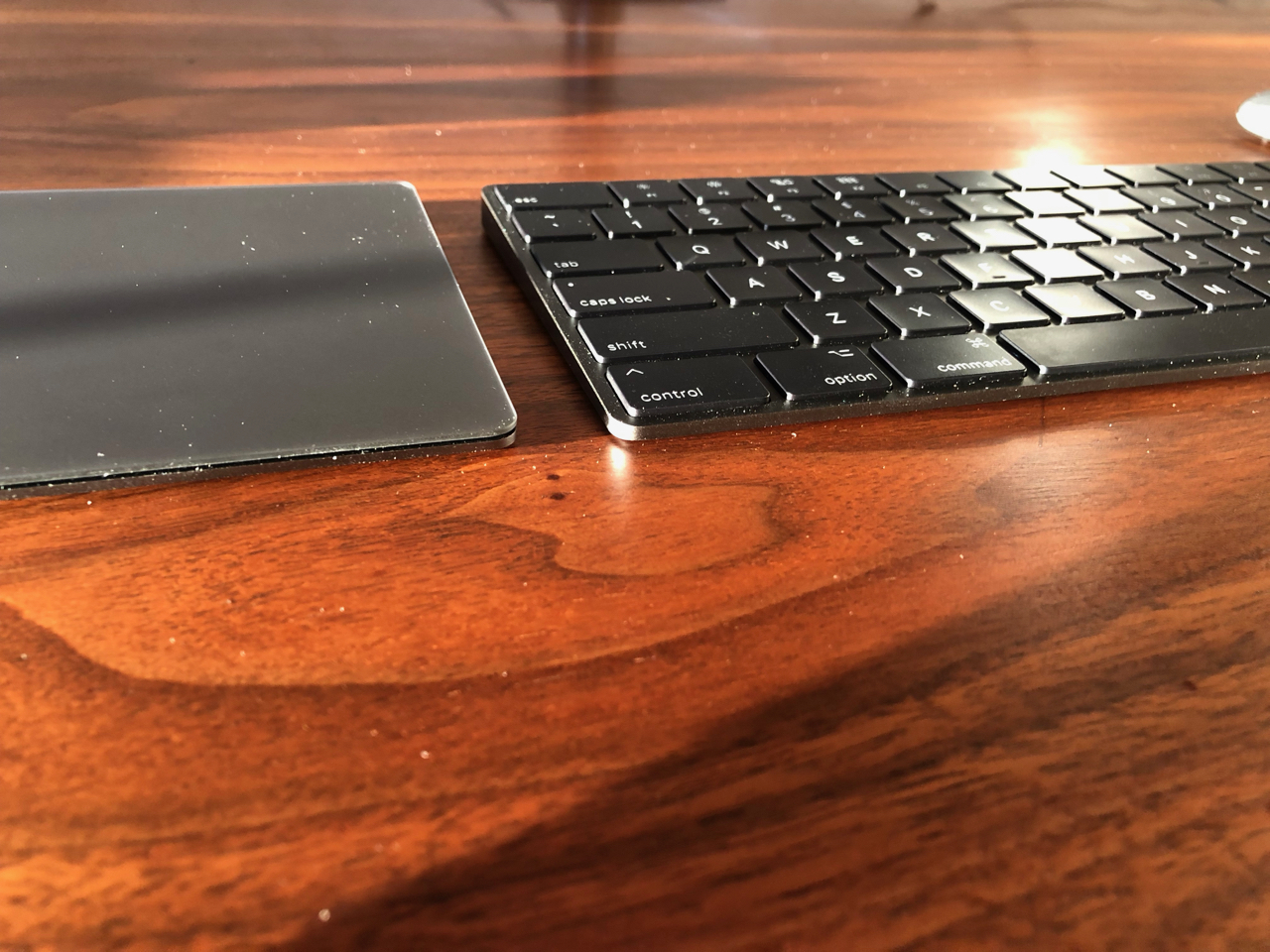 I got both because I thought maybe I’d like to go back to the sleek design of the Magic Mouse over my beloved Logitech MX Master. I do not.

The MX Master is far more comfortable and functional. I’m guessing the strange requirement that peripherals can only be purchased with the computer is to prevent a run on the parts and to make them feel more exclusive. So, now I have an exclusive mouse that I rarely use.

The one comment I have about all of this Space Gray goodness is that it shows off dust very well. Even one spec of dust is obvious. The Magic Mouse also shows finger prints quite clearly. They are artful but might annoy someone with some compulsive behavior. Look closely enough at photos and you’ll either see dust or spary cleaner bottles. Or both.

The first major “bug” I encountered was with YouTube in Safari. Here’s what I saw when attempting to play any YouTube video: 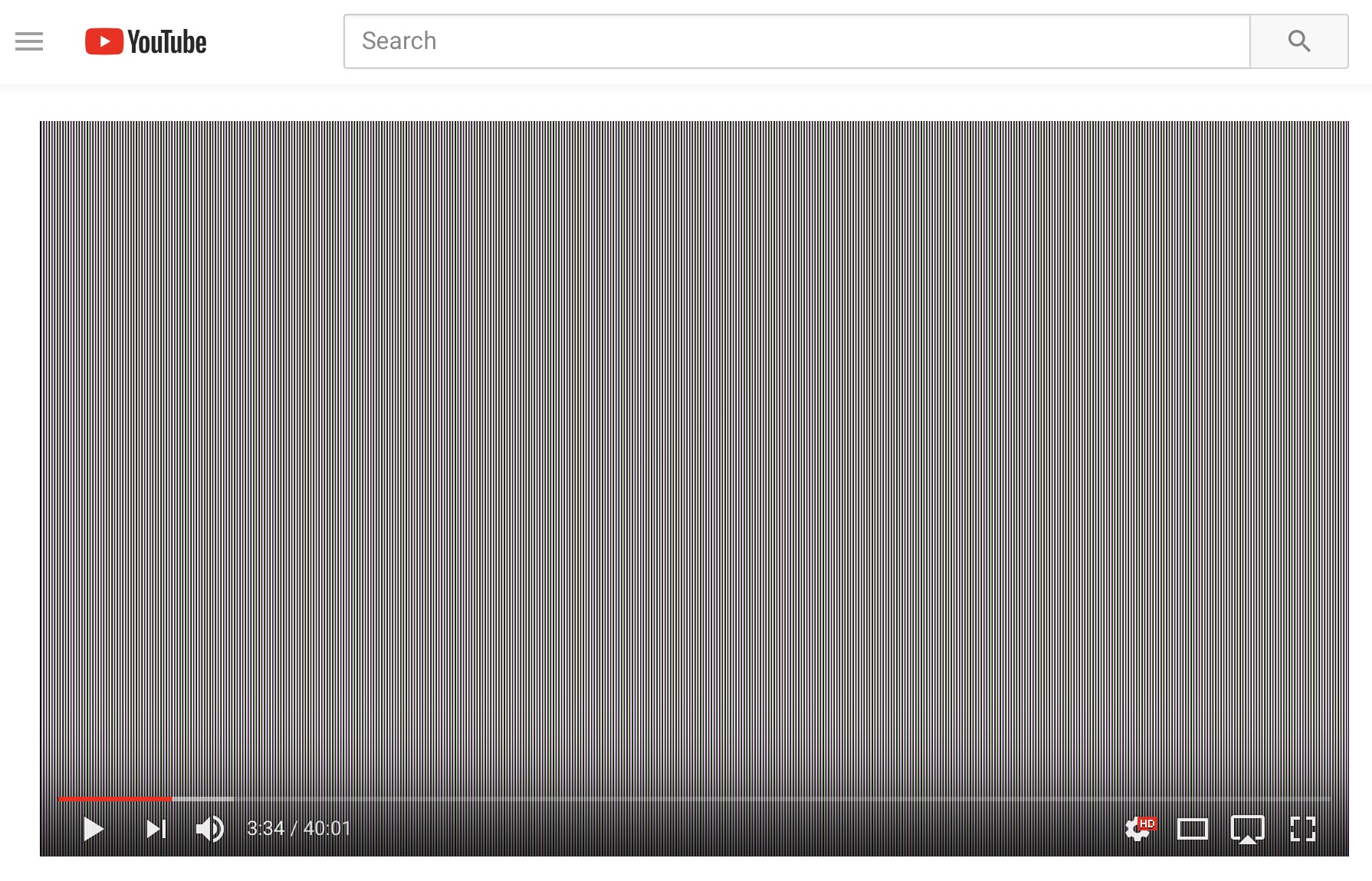 Those pink vertical lines, while soothing, are not what I go to YouTube for. If I wanted soothing, I’d stay away from the internet entirely. This is a sporadic issue that I’ve only seen on the iMac Pro.

The workaround is to use Chrome, which has no issues with YouTube videos. I’d call this a Safari bug except it only shows up on my iMac Pro. I only have one iMac Pro so I don’t know if it’s a hardware failure of the 5K display or if it’s a general software problem. I suspect that if this was common there would already be a hash tag for YouTubeGate.

The other problems I have with the new hardware are personal and easily solved. I no longer work comfortably with an Apple full-sized keyboard. It’s too wide. I have a mouse to the right and a trackpad to the left. macOS feels better with a trackpad and gestures. While I like the feel of the Space Gray Extended Keyboard, I’ll be replacing it with something tenkeyless.

Bluetooth is often slow to connect on the iMac Pro. At least once a day I sit down to the iMac and hit a key or the mouse and nothing happens. Only after repeatedly hitting the space bar on the Apple keyboard do I get a login prompt. At other times the Logitech mouse will wake the display but the keyboard will remain inactive for several seconds which prevents me from logging in.

The Magic Trackpad, while luxurious in size, has major issues with loss of function. The iMac shows the device is still connected but it doesn’t respond to touch until I restart the trackpad. For an exclusive and pricey iMac Pro peripheral, this is pretty bad. None of this is enough to dissapoint me with the machine, but it’s not perfect.

Here are some things that I recommend for anyone that has a large format display like the 5K iMac.

Window control is much more important on a giant screen. With my MacBook Pro I used a 27” Thunderbolt Display, but my main working space was the MacBook Pro Retina screen. When the main space is gigantic, it’s inefficient to have windows bigger than a third of the screen. Get a good window manager like Moom or Keyboard Maestro. Continue to tweak it every time you end up moving windows around manually.

I also prefer the Logitech MX Master mouse because of the gesture support. In particular, I can map the extra buttons to trigger spaces and Launchpad. 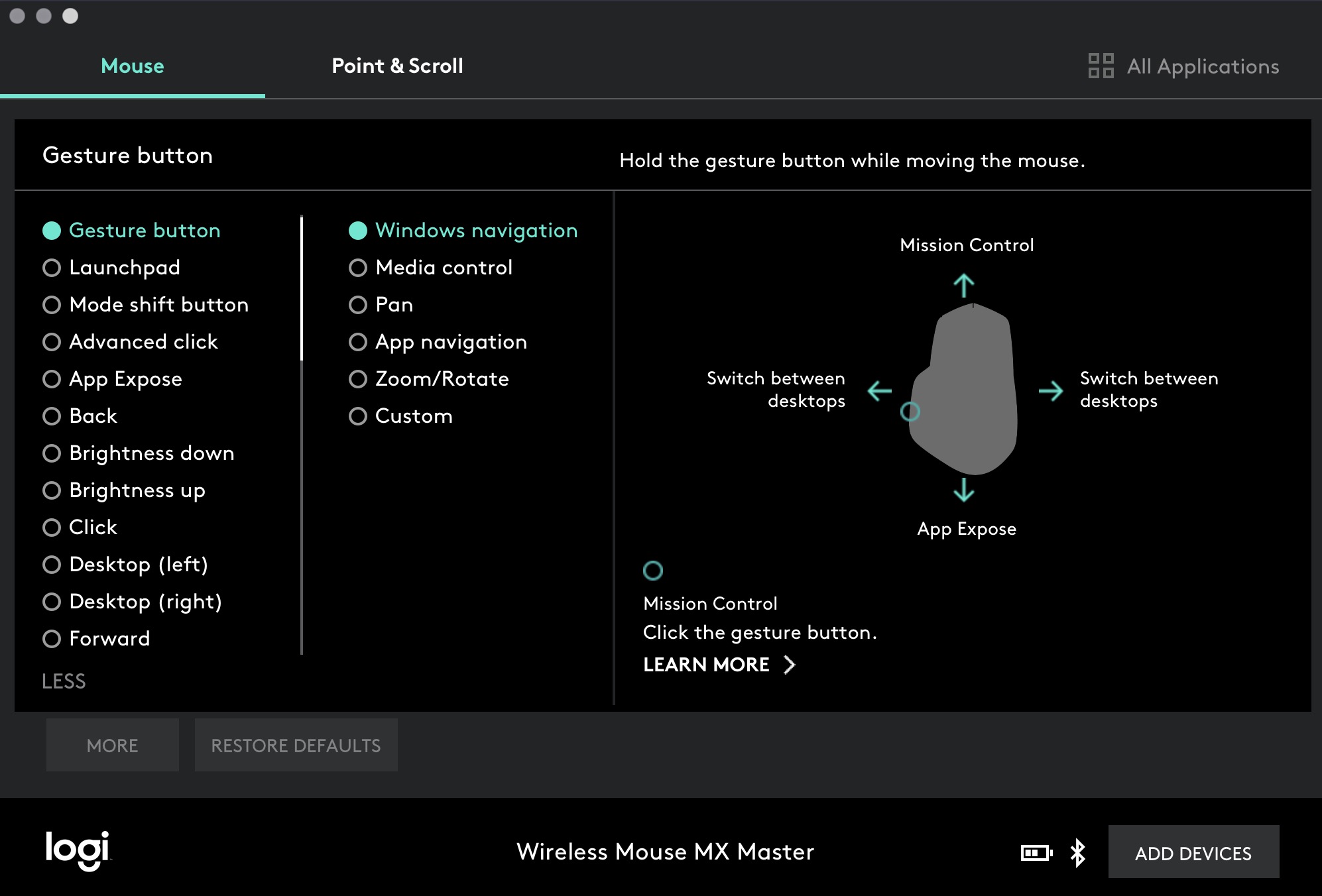 The Magic Trackpad is, by far, the best way to control Spaces and windows on the Mac. Configure all of the gestures. Then invest the time to learn them. It pays off. I find the combination of keyboard navigation and Magic Trackpad gestures to be fluid and sublime. This isn’t much different than the MacBook Pro but it’s even more vital on a massive 27 inch screen. 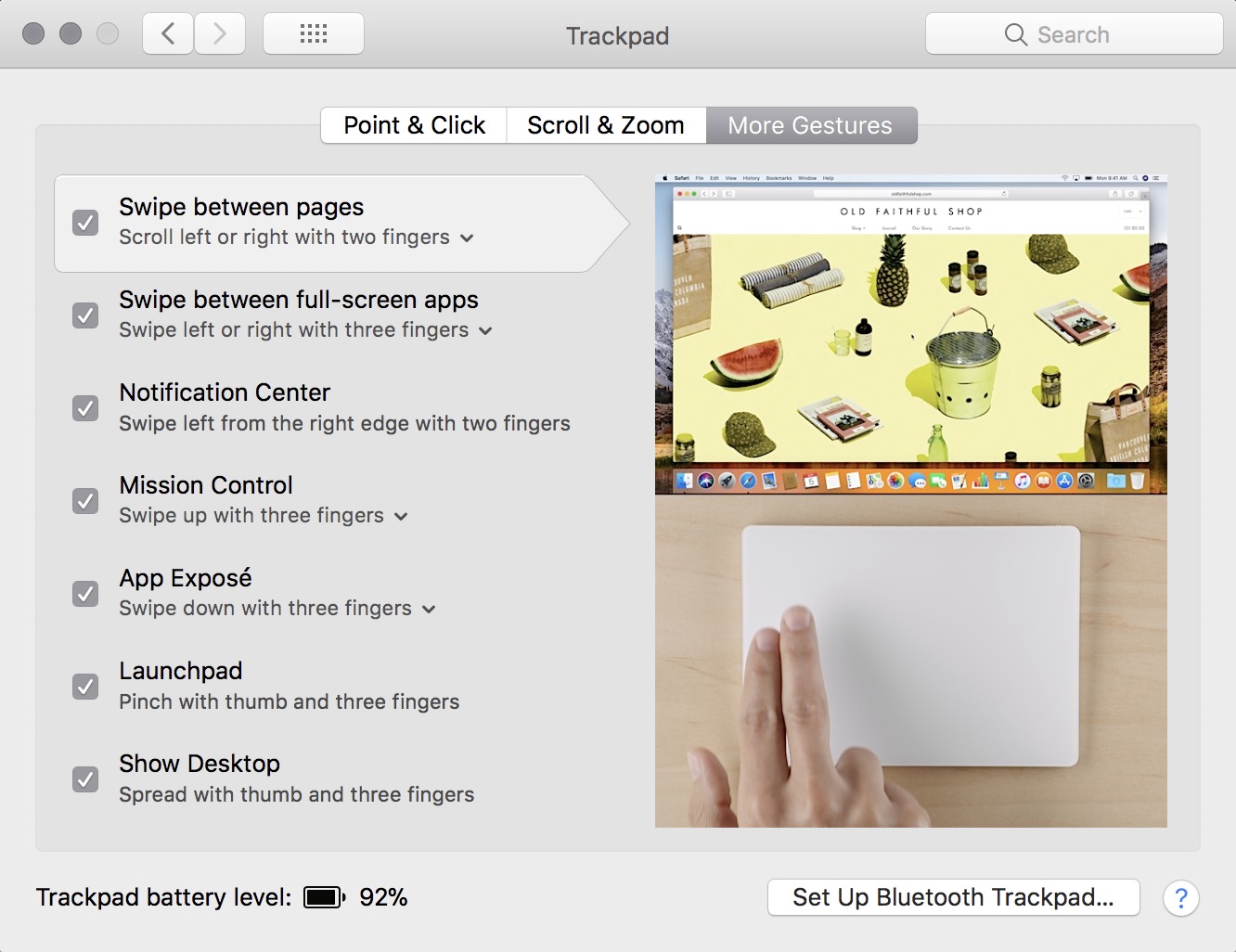 If you want to use the Magic Mouse it’s probably worth learning the meager gestures available. 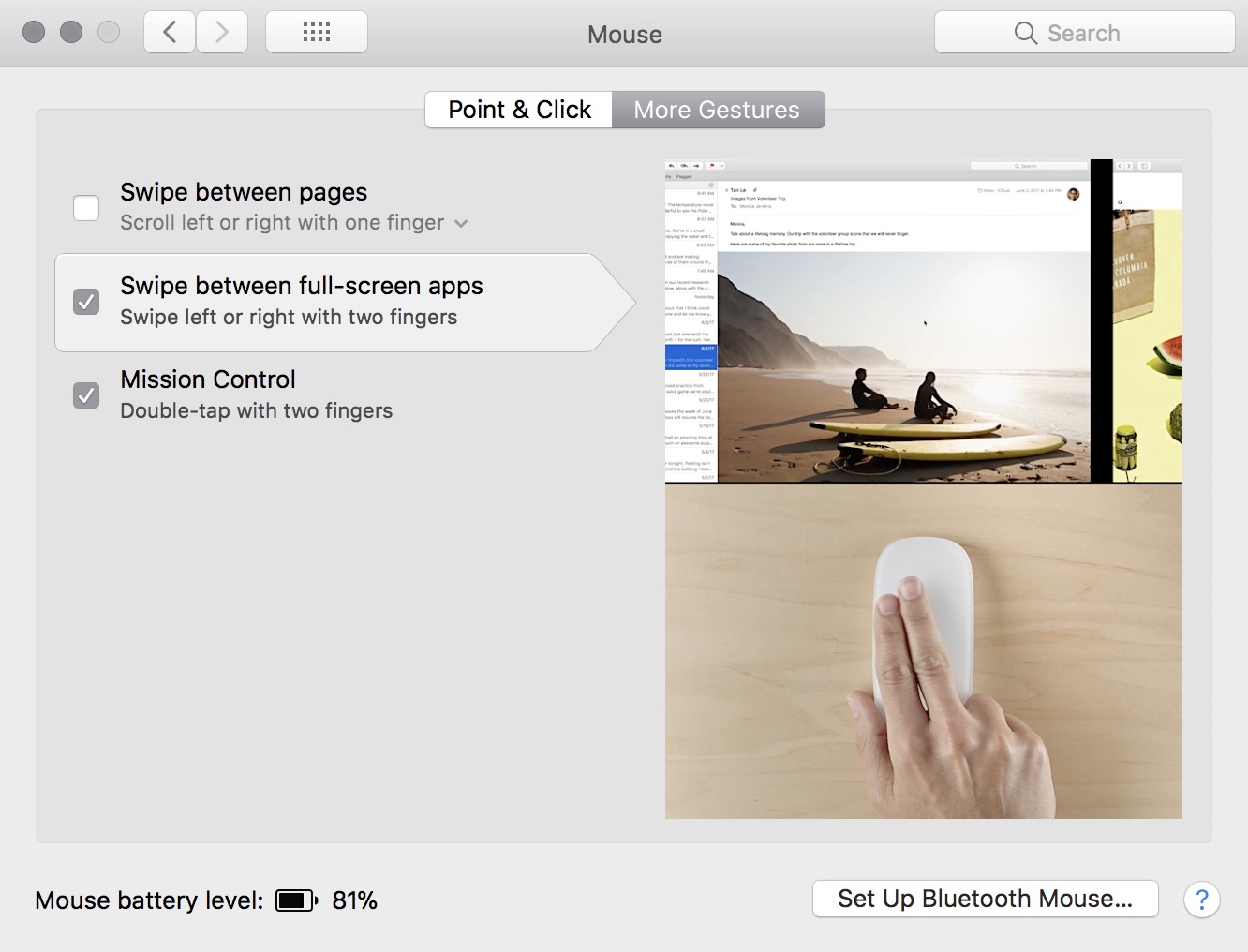 Get a good launcher. Spotlight is fine but the world of launchers is so much bigger and better. I rarely quit applications on the iMac Pro, so command-tab is a little annoying. Alfred or Launchbar are nice ways to quickly switch apps by name. The Keyboard Maestro Application Switcher displays a grid view with optional auto-hide of other application windows. They are all slightly better than the standard macOS application switcher on large displays. 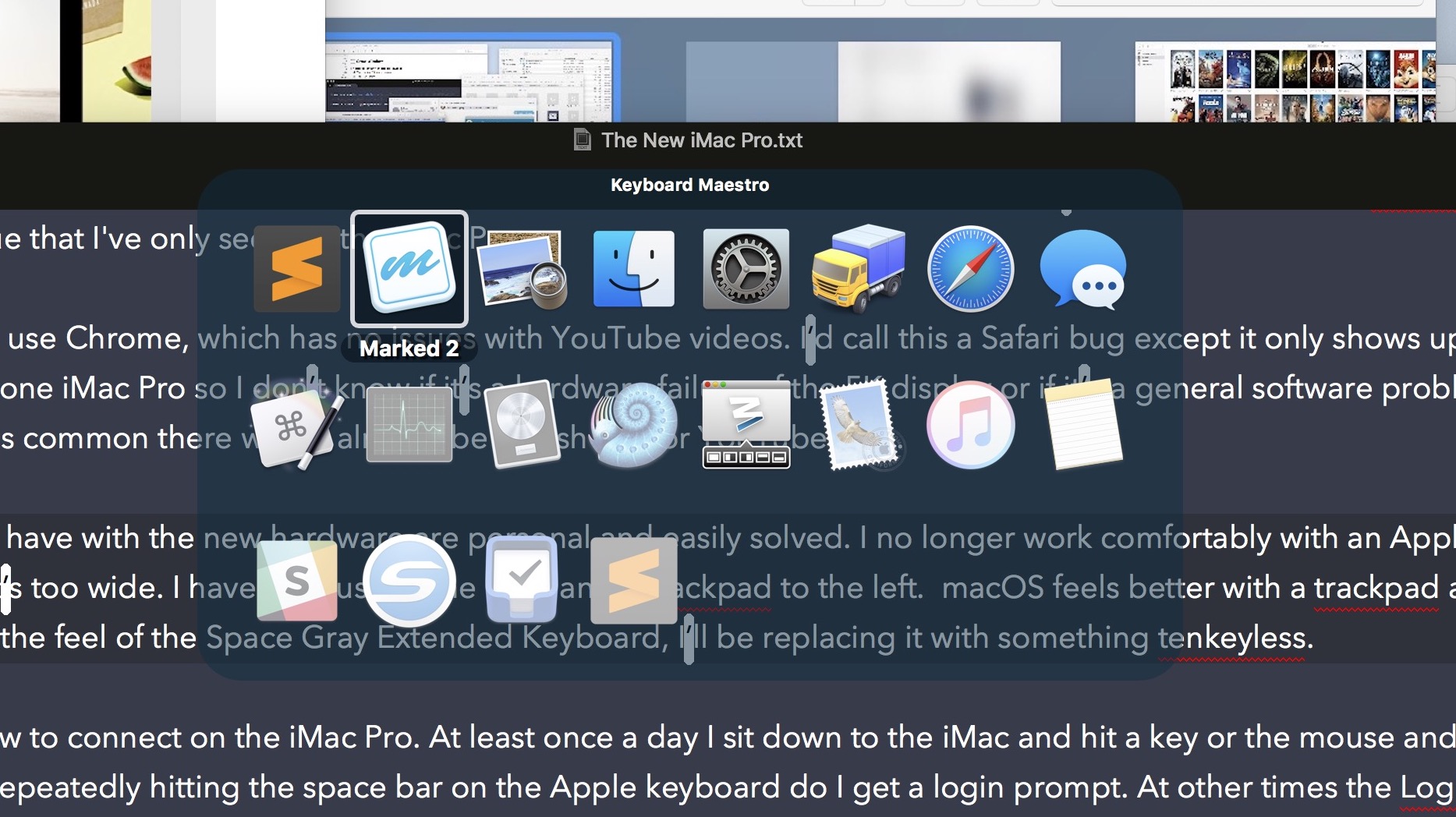 Full screen applications on a 27" screen are inefficient for me. With few exceptions, such as Logic Pro, a full screen app just means I see a lot of empty space and need to move the cursor more. I rarely used split-screen on the MacBook Pro but it’s now my standard way to use a full-screen app. Learn the various ways to enter split-screen such as drag and drop from Mission Control. Once triggered, drag a new app up to an existing full-screen application and then you have a nice split screen combo.

My last tip is that you probably don’t need an iMac Pro. It’s a hell of a machine and the hardware team at Apple deserve to get desks as rewards for this amazing product. It’s the best desktop Mac I’ve owned.