The Brydge Keyboard for iPad 10.5

Give me a keyboard and I will give you 10 problems with it. I love a good keyboard but I can also type equally bad on just about any keyboard. I'm not a speed writer. I touch type about 50% of the time but I still look at the keyboard often. I don't use the correct hand posture but I do use a consistent finger placement. So with all of those caveats out of the way, here's my review of the new Brydge keyboard for iPad (and an accidental review of the Apple Smart Keyboard Cover). 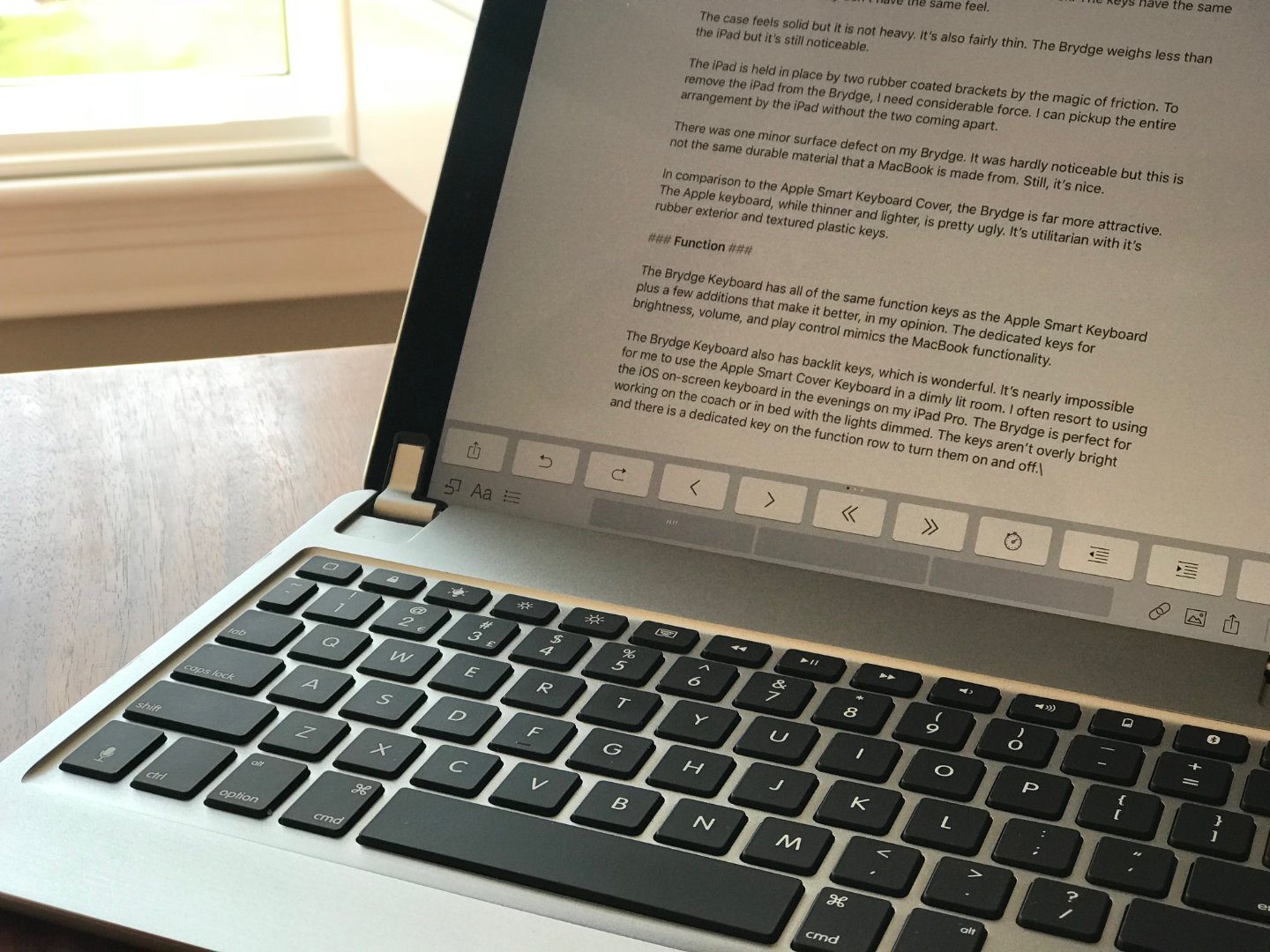 The case feels solid but it is not heavy. It’s also fairly thin. The Brydge weighs less than the iPad but it’s still noticeable.

The iPad is held in place by two rubber coated brackets by the magic of friction. To remove the iPad from the Brydge, I need considerable force. I can pickup the entire arrangement by the iPad without the two coming apart.

There was one minor surface defect on my Brydge. It was hardly noticeable but this is not the same durable material that a MacBook is made from. Still, it’s nice.

In comparison to the Apple Smart Keyboard Cover, the Brydge is far more attractive. The Apple keyboard, while thinner and lighter, is pretty ugly. It’s utilitarian with it’s rubber exterior and textured plastic keys.

The Brydge wins for being able to type anywhere. The rigid hinge means I can sit on the couch and type as easily as I can on a desk. It’s also great for reading in bed. Unlike the Apple Smart Keyboard or the horrible Logitech Slim Combo, I don’t have to balance it on my knees like some sort of Elizabethan purity test.

The Brydge Keyboard has all of the same function keys as the Apple Smart Keyboard plus a few additions that make it better, in my opinion. The dedicated keys for brightness, volume, and play control mimics the MacBook functionality.

The Brydge Keyboard also has backlit keys, which is wonderful. It’s nearly impossible for me to use the Apple Smart Cover Keyboard in a dimly lit room. I often resort to using the iOS on-screen keyboard in the evenings on my iPad Pro. The Brydge is perfect for working on the coach or in bed with the lights dimmed. The keys aren’t overly bright and there is a dedicated key on the function row to turn them on and off.

The Brydge also has a dedicated Siri key on the keyboard in place of the keyboard switcher of the Apple Smart Keyboard. I love this. I use Siri far more than I switch between keyboards. This is an obvious improvement over the Apple keyboard.

A few more improvements offered over the Apple keyboard are the dedicated play/pause key, the lock key, and the keyboard activate key. I really like the play button for controlling music playback while writing. The lock key is a great way to lock the iPad when I walk away without closing the case. I use the keyboard activate switch when I want an Emoji or the Copied keyboard. These are the only times I care about switching keyboards and this works well for m.

The Brydge uses Bluetooth to connect with the iPad. This about as bad as I expected. Brydge describes the connection process as much more simple than it is. In theory, opening the keyboard case should trigger the Bluetooth connection. In my experience I need to press the Bluetooth key and then type one key on the keyboard before the iOS on-screen keyboard is replaced by the Brydge keyboard connection.

Closing the Brydge automatically locks the iPad, which is nice. Opening the Brydge while the Bluetooth connection is still active causes the iPad to activate and display the lock screen. This is similar to the Apple Smart Keyboard.

Overall, the Brydge far exceeds the Apple Keyboard in functionality. It’s basically like connecting any modern Bluetooth keyboard to the iPad with a few extra tricks that are iOS specific. In contrast to the Logitech Slim Combo, I prefer the Brydge Siri key.

It’s All About the Keys

This is the twist ending.

To me the keys feels misaligned. When I strike one it depresses but no input is generated on the iPad. I must then go back and delete a character or two and then type again, this time pressing harder.

It’s possible that there’s a bit of a break-in period. I’ve noticed after a few days of banging away like an ape, I’m getting fewer failures. The D, A, G, and S keys are particularly bad still and it feels wrong to abuse this tiny keyboard like it requires.

In contrast, the Apple Smart Keyboard only needs a gentle touch. Sure it sounds like a tap-dancing duck, but at least it forms complete words.1

The Brydge keyboard seems slightly smaller than the Apple Smart Keyboard. I don’t think that’s a major problem for me. I’m not missing the keys or striking the edge of the keys.

I’m several days in with the Brydge keyboard and I’m ready to return it. I love the looks and the functions but the typing, arguably the most important part, is terrible. Beautiful on the outside and ugly on the inside. That’s just not the life I want to build.