Collecting and Reading with DEVONthink

I read a lot. Until recently that included Twitter. To replace that source of information, I've shifted to other, more curated, sources like my RSS reader.

I'm a big fanatic for Pinboard. It's almost completely plain, minimally styled, text on a blank page. I capture every web link that I find interesting right into Pinboard. I also use it as a reading list. It's great.1

I was asked on Twitter about using DEVONthink (DT) as an RSS reader or Pinboard alternative.2 Before Pinboard I used DEVONthink and it was great for archiving web content. I even used DT as an RSS reader for a long time after I gave up on NetNewsWire. I don't think I'd be able to switch my entire bookmarking activity to DEVONthink simply because I'm on Windows during the day and have no access to DEVONthink there. If I were Mac and iOS only, this could be a great system.

Adding an RSS feed to DEVONthink can only be done on the Mac right now. The same goes with refreshing the feed content. This is a major barrier for some folks that are iOS only. Hopefully this changes soon.

On the Mac, just add a new RSS type document and provide the feed address. 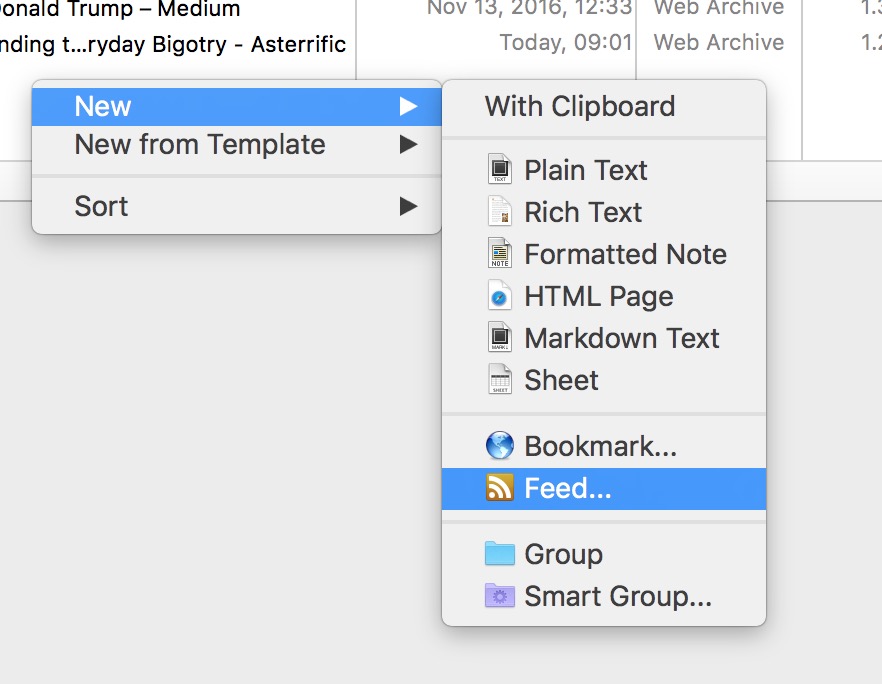 DEVONthink will download each article and display them in a nicely formatted view. Even better, if I mark the feed document with a "read_later” tag, each article will also get the same tag. While I'm reading on the Mac, I can archive the document for off-line storage and search. 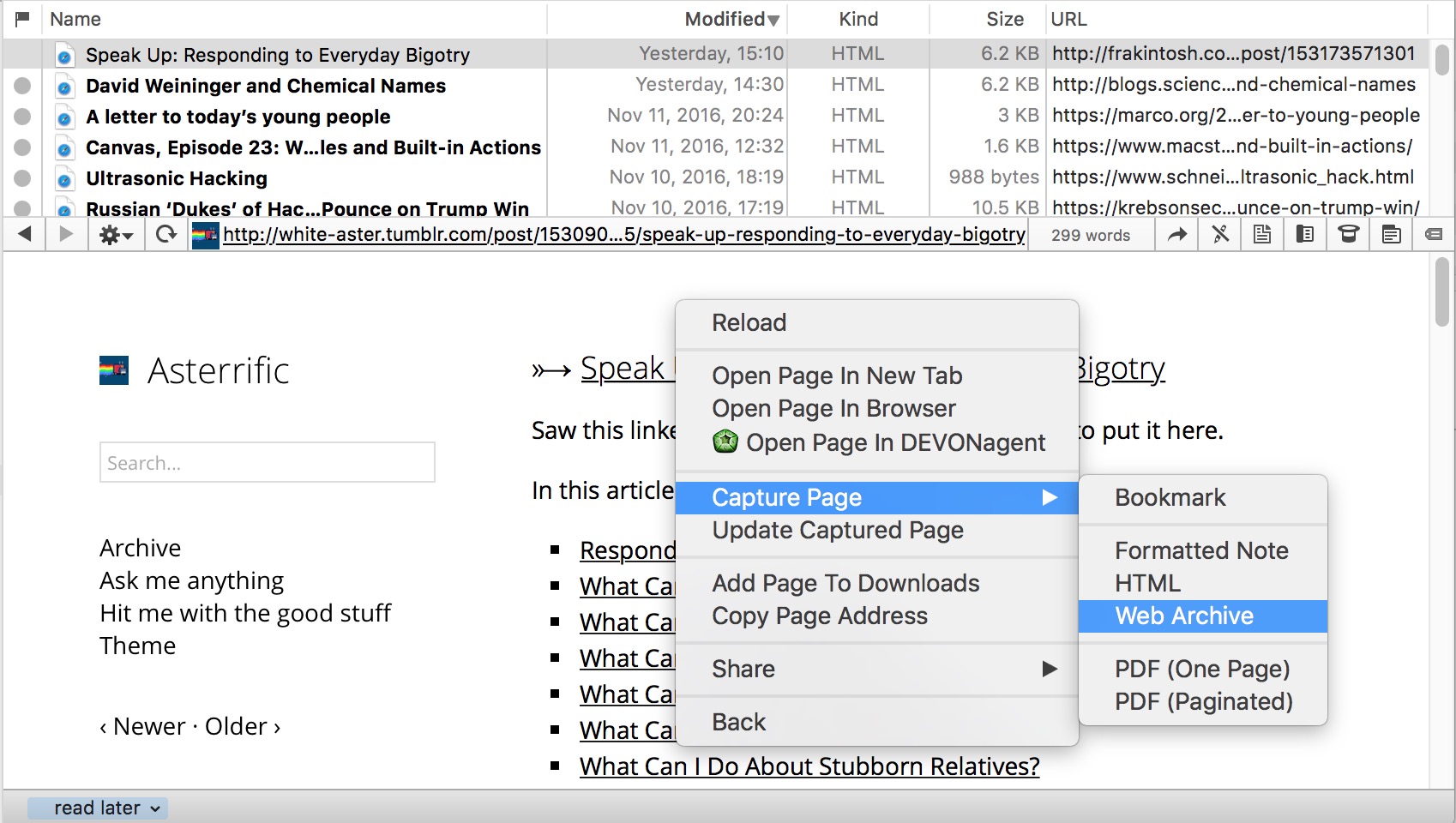 If I'm in Safari, I can use the web clipper to capture a page in several different formats and apply tags along the way too. 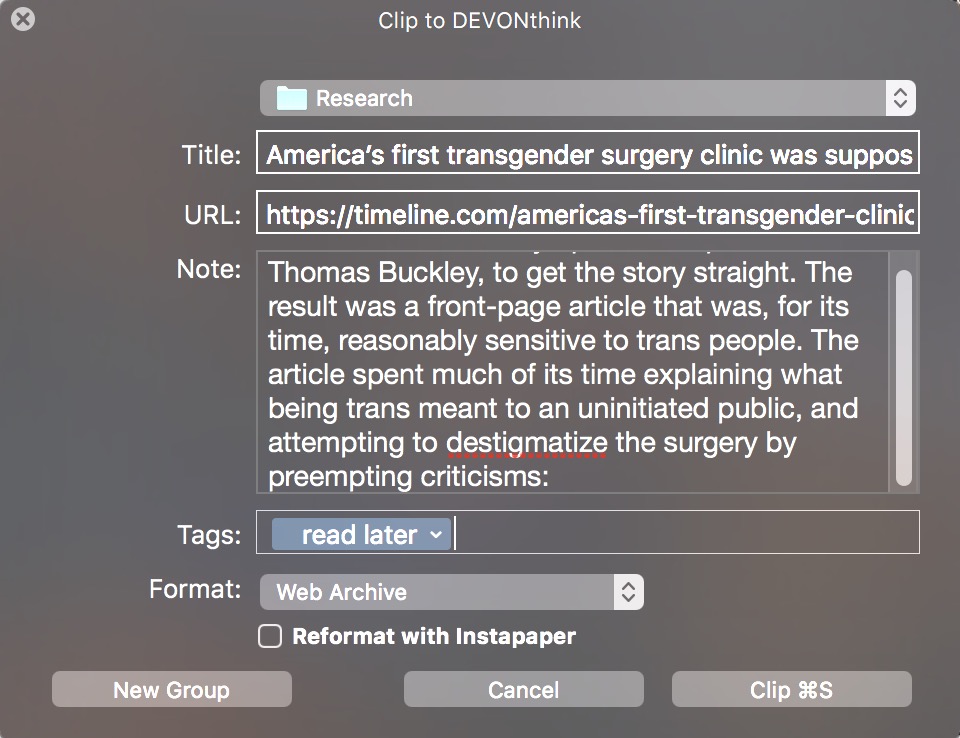 When I was using DEVONthink as a feed reader and article filing system my favorite thing was the intelligence built into the app. Not only was searching very easy but it was more powerful. The boolean search operators were far more effective than anything I can now do on Pinboard. The "See Also" system in DT is unlike anything I've ever used. This was particularly useful when I had a large collection of web pages in my archive. If one page wasn't exactly what I wanted, the "See Also" score often pointed me to the right one. 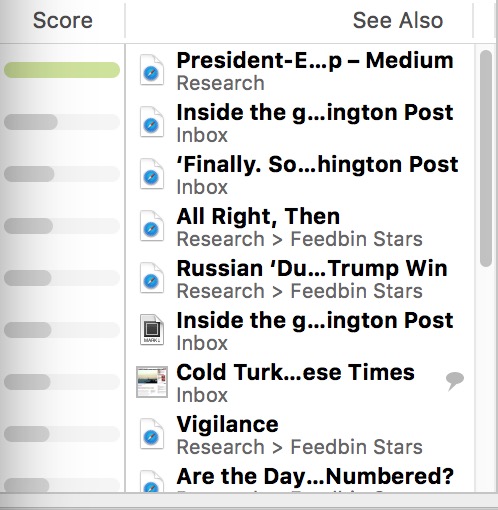 Syncing from Mac to iOS works well in DEVONthink. The read status is updated and I can create archives of pages. As mentioned above, DEVONthink on iOS can not update an RSS feed document on its own. It can only sync the articles from the Mac. This is probably a bigger barrier for me than even the lack of access on Windows. I'm often on my phone and want feeds to update wherever I am. 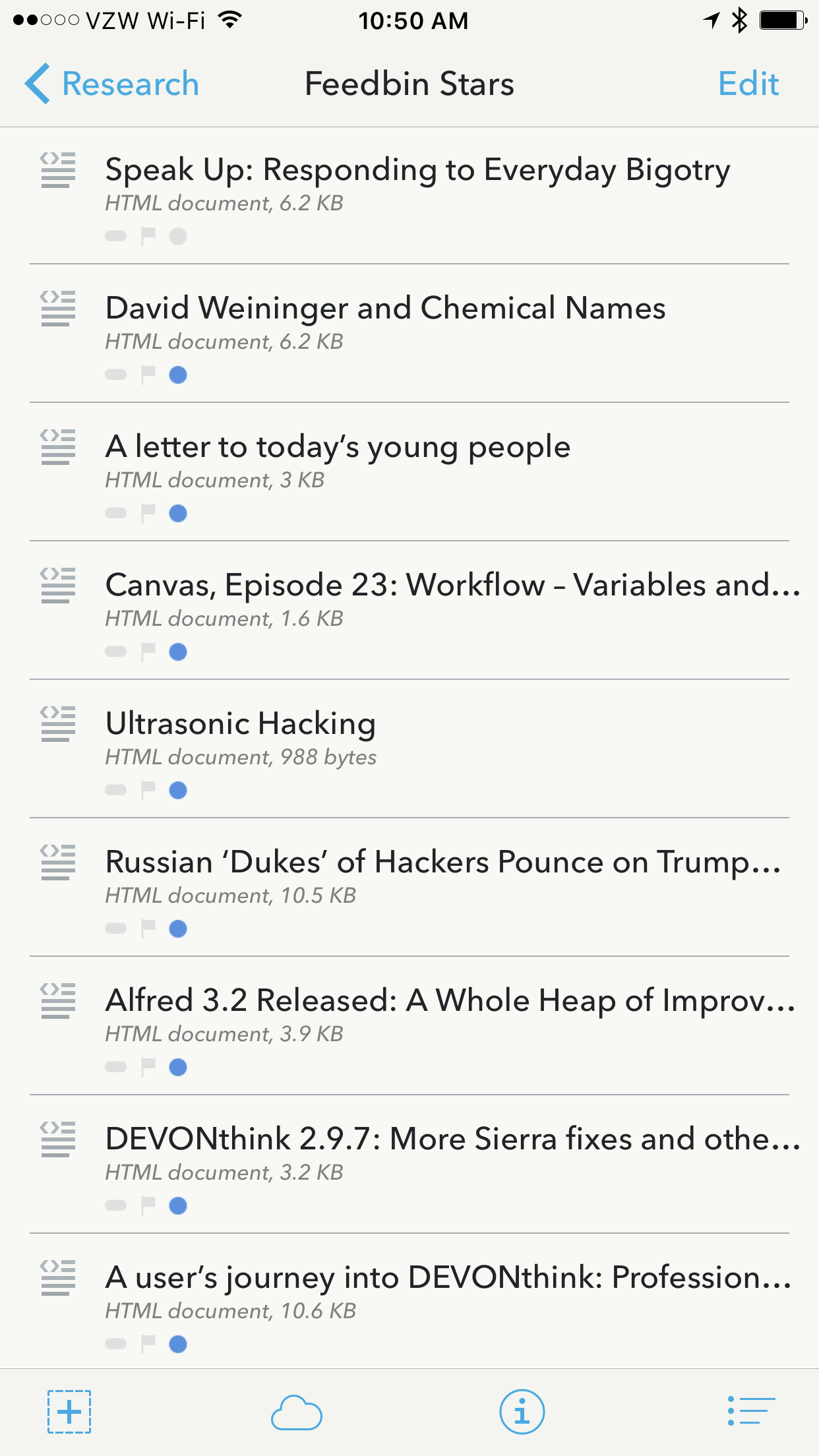 The article view on iOS is satisfactory. It's not as nice as a dedicated reader but it works. The real benefit is in the built in capture tools in DEVONthink To Go. While reading an article I can quickly capture it for off-line archiving right within the app. Not only are there several options but I can also edit the meta data along the way which benefits future searching. 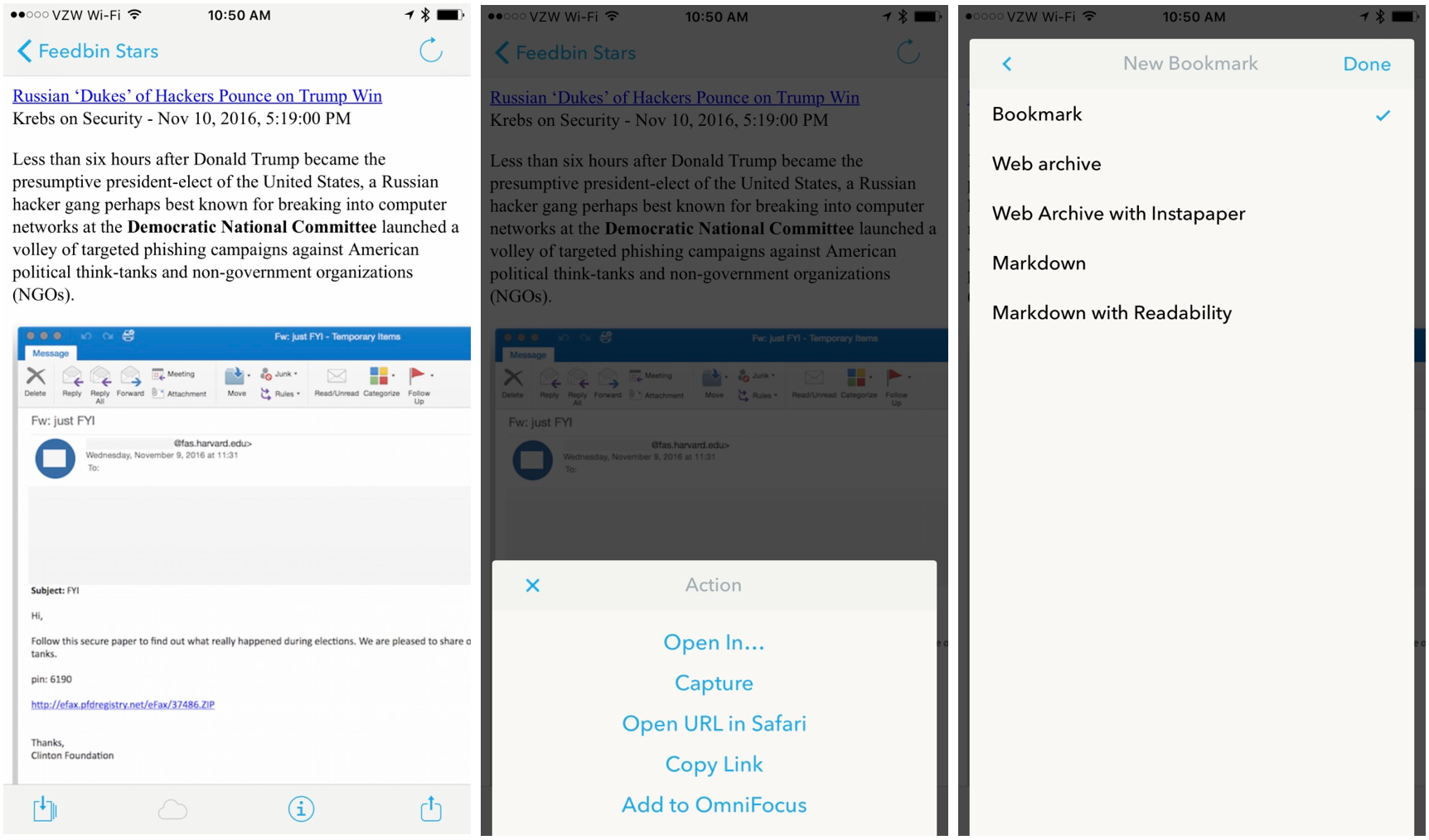 Unfortunately, I don't think DEVONthink for iOS is ready to be my RSS reader. It's still a terrific place to archive pages and bookmarks though. The search operators still work in iOS and the extension is a very convenient way to capture a lot of different content. Web pages can be captured as archives or as Markdown pages with reference links back to the original source. 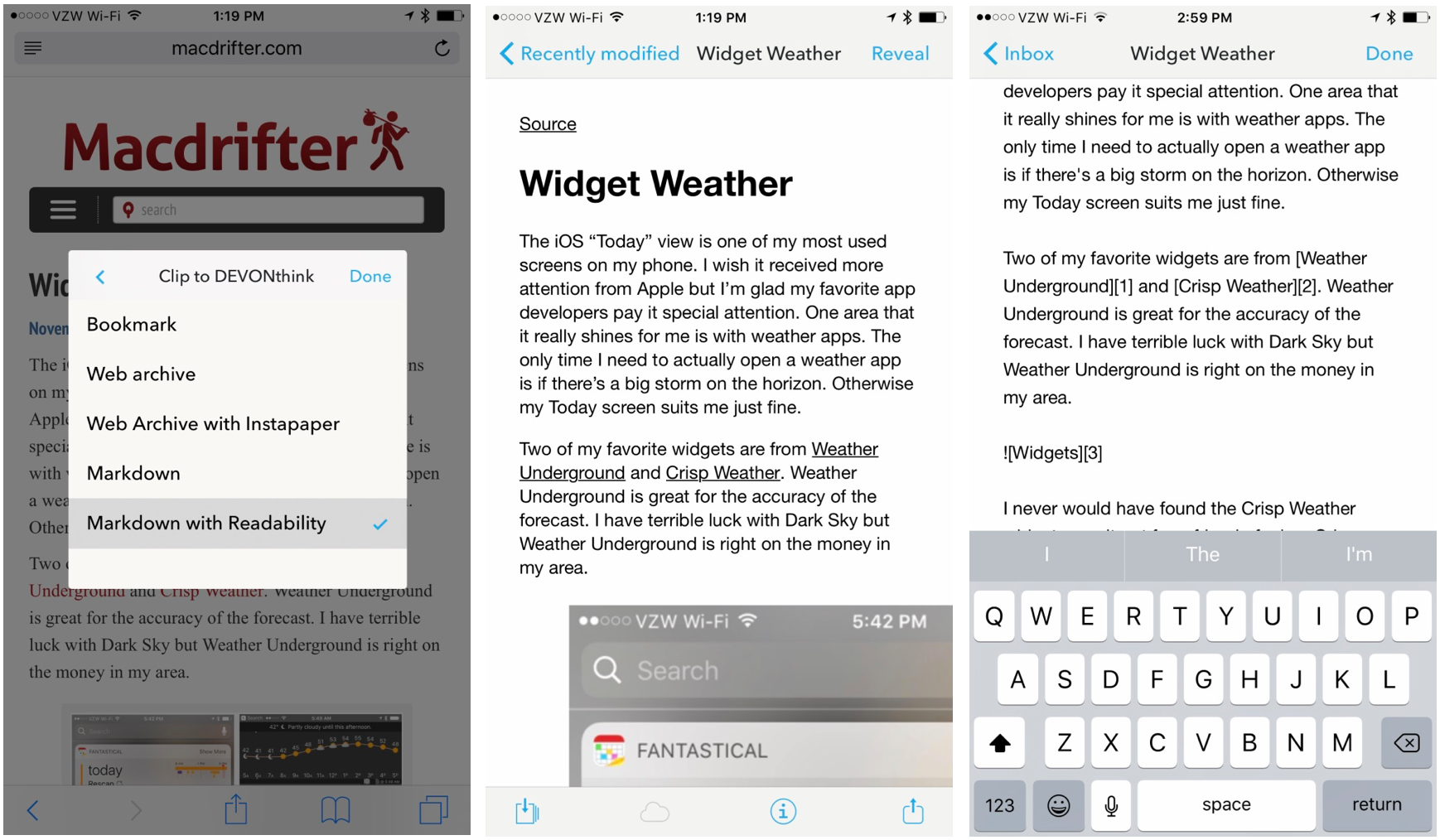 After a bit of bending over backwards to make this work, I don't think I can use DEVONthink for a complete bookmarking or feed reading solution. I think it's great for selective archiving of web content that I'm confident I'll want to look up later. I use the Mac and iOS applications quite a bit when I'm researching how to build a fence or what the best new T.V. is, but I don't think I'd want to archive every web page I read in DEVONthink. I'm a bit on the fence here, though. With a few more features in the iOS app I I'd be all in with DEVONthink for bookmarking. Grouping web archives with bookmarks and text notes with a inside a folder structure is a great argument in favor of DEVONthink. I'll keep using Pinboard for bookmarks, Feedbin for RSS reading and DEVONthink for dedicated research work. We'll see what 2017 brings. For now, I enjoyed the distraction of experimentation with a long-unchanged system.