Goodbye Zite, I Totally Knew You. Now for Some Alternatives

If you search the archives here, you'll see that I've been a huge fan of the iOS news app Zite for years. If you follow me on Twitter you've probably seen my early morning and weekend reading-links filled with science, beer, politics, and technology. Most of that content was surfaced for me by Zite.

Zite was special because it drew from multiple sources. It had a few of their own sources, which were mostly click-bait or teen-dream content, but the real power came from my RSS sources, Twitter account and an amazingly specific preference engine to tune content.

Now Zite is over. The service was acquired by Flipboard and after over a year they've finally ended the app in favor of the Flipboard app. Unfortunately Flipboard doesn't quite fill the shoes left empty by Zite. Then again, nothing else quite does either. However, through a combination of several services, I'm filling in the gaps. Nothing is a big winner but there are interesting iOS apps that provide some new tricks over my comfortable Zite catalog.

Here's what I've tried and not deleted from my iOS devices.1

The Zite content was sourced from a mix of small obscure sites all the way up to huge media outlets. This provided a much more even distribution of world news stories down to blog posts about scripting the web with Python. It more closely resembled my real world interests. It felt like recommendations from my friends.

In theory Nuzzel should do this too since it is based on my Twitter stream but it doesn't. Maybe this is because most people just tweet the same things over and over. I get it. Eagles don't like The Trumpkin. In general, Nuzzel is mostly the same stuff repeated from different sources. It's just not that interesting.

Flipboard is mildly better but tends to be sourced from major outlets or whatever is popular on Twitter. Apple News is just not that good at surfacing anymore than a CNN ticker. 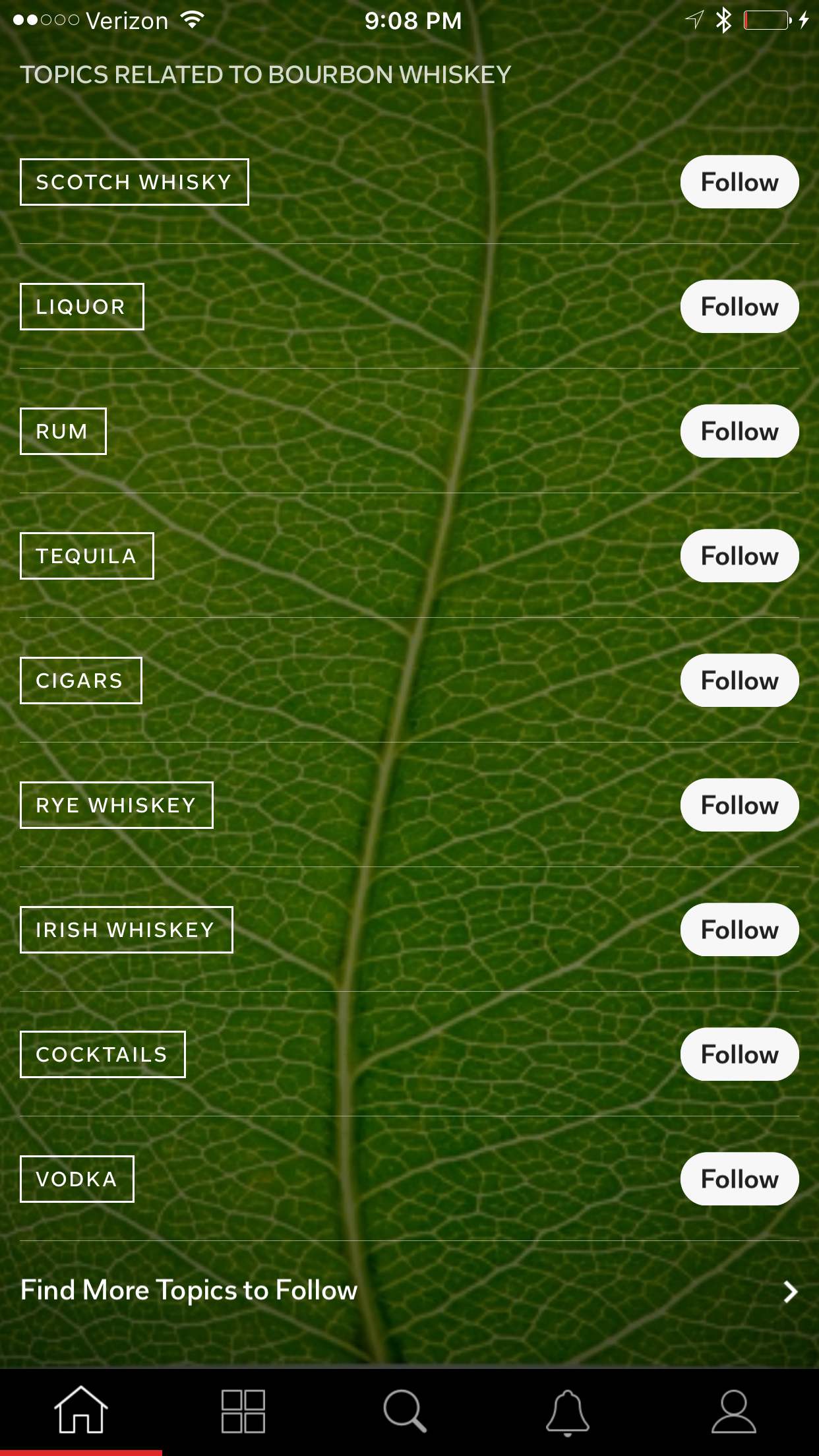 I think Wildcard and Timeline have the best general interest content but still focus heavily on national news. Timeline is a bit more political while Wildcard is a bit more culture and technology focused.

No service does very well at surfacing good articles about science, history, craft brewing, or any other niche interest I have.2

It seems that too many apps think I want to be impressed by their CSS and image transform knowledge. Flipboard gets this wrong with the extra effort and interruption of flipping pages. Seriously, it's an electonic display, there's no need to flip anything. All the inconvenience of a real magazine, right in your pocket.3

But Flipboard doesn't own the rights to "magical" interface design. Wildcard, Timeline and Apple News also layer a bit too much glitz as a replacement for diversity in content. There's plenty I do like about Wildcard though. The app attempts to stack articles about the same topic together in the article list. This is a huge timer saver when a supreme court justice changes the color of his robe. If I want to dig deeper on that story many different articles are in one place. If I'm tired of it, then I can scroll past the stack. 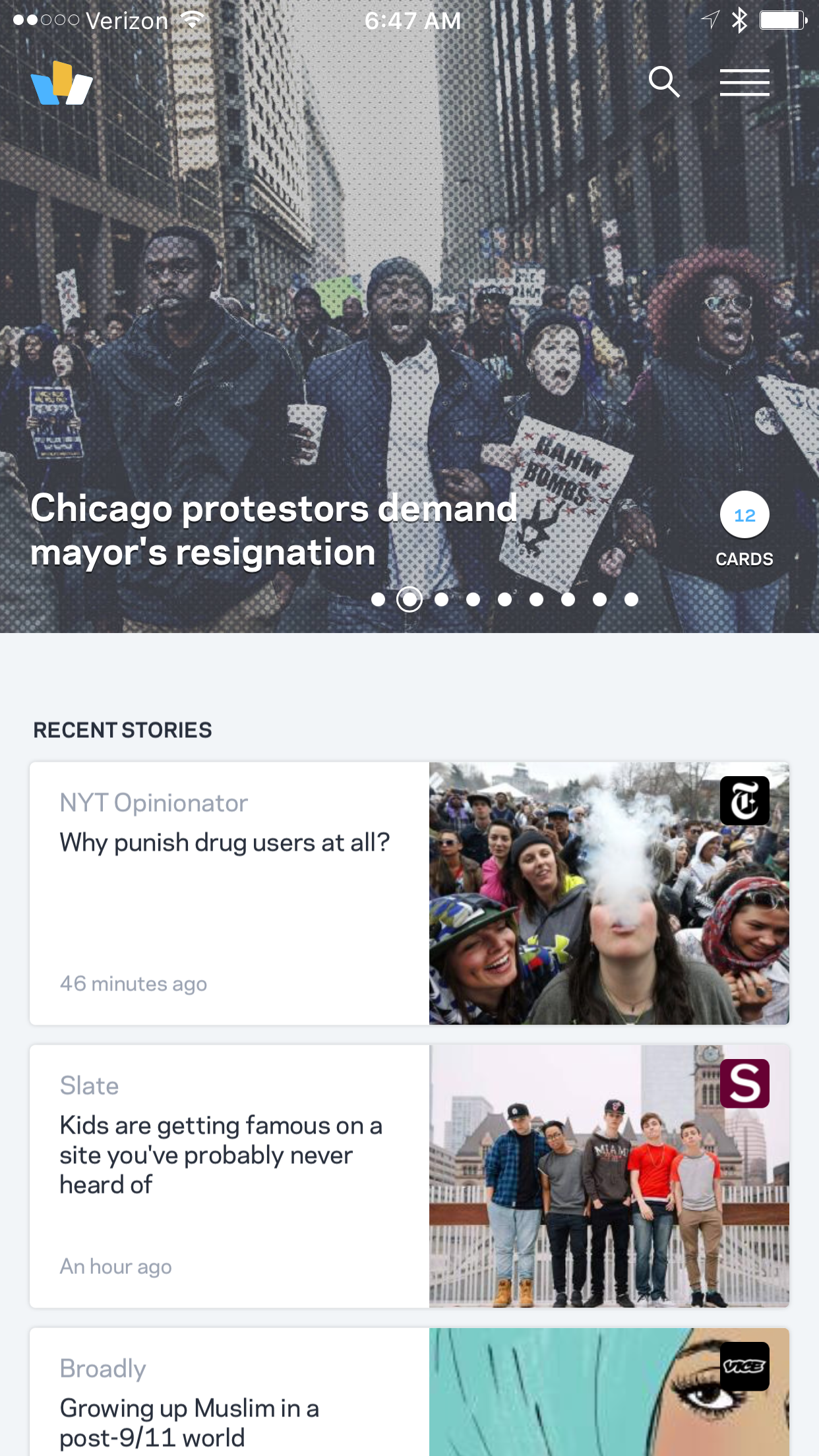 Wildcard tries to create diverse content by incorporating social media. Unfortunately, this fails horribly most of the time so I've removed access to my Twitter account. But where Wildcard accels is in viewing. The "card" view is essentially a stripped down version of the article with all of the cruft removed. It loads faster and is more pleasing to read. 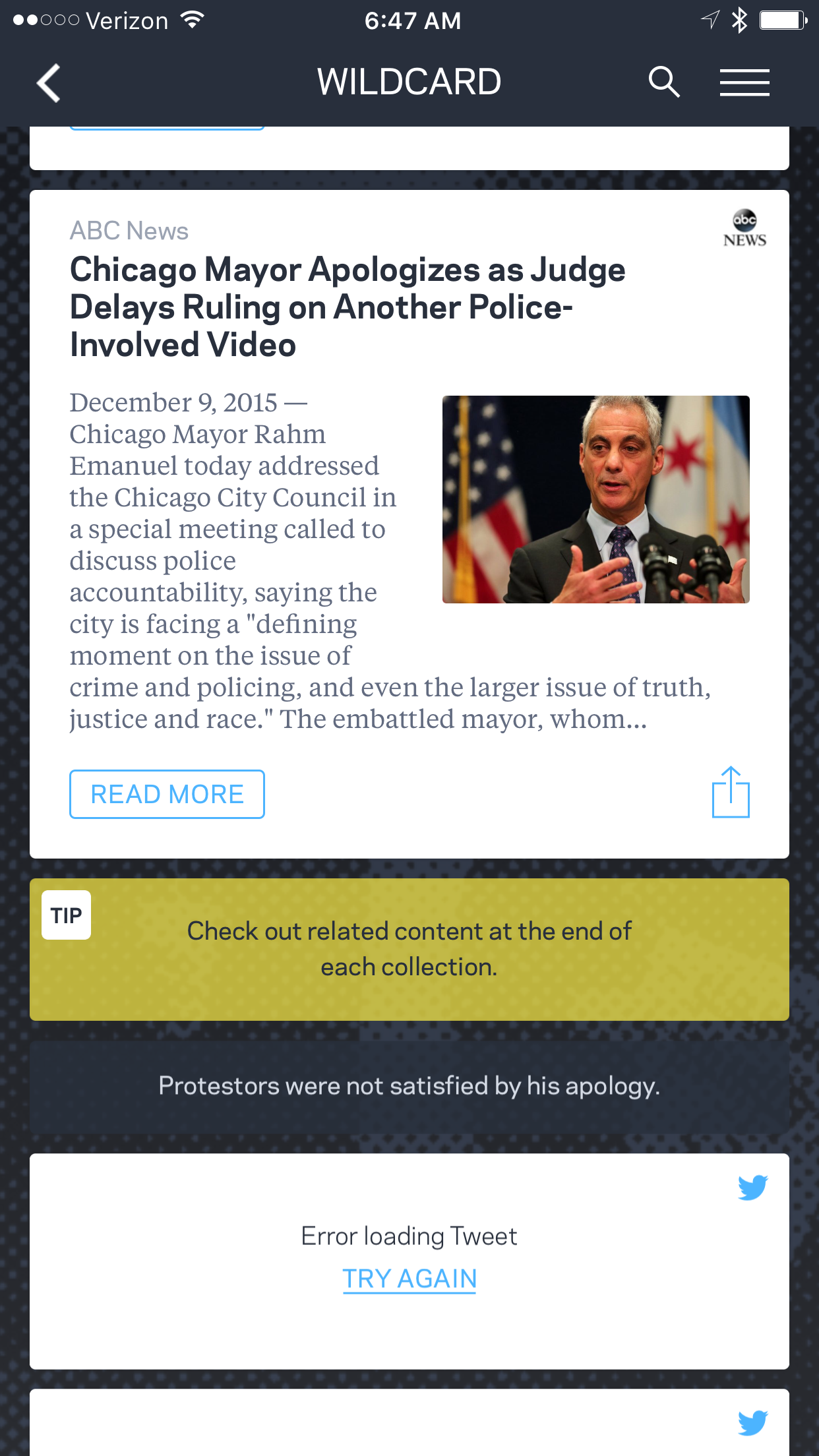 Apple News is really just a terrible RSS reader where I don't get to choose the feeds. It's not surprising that all of the sites it thinks I want to read aren't in my actual feed reader. They're really trying hard to source unique perspectives with sources like Time, Vox, and Reuters.

Timeline feels more like a news journal with well researched content placed within a chronological arrangement to the topic. It's interface feels like it was made by people that have a genuine interest in knowledge. The flow of a story isn't just a single topic. It's a continuously scrolling series of summaries about a the history of a story. 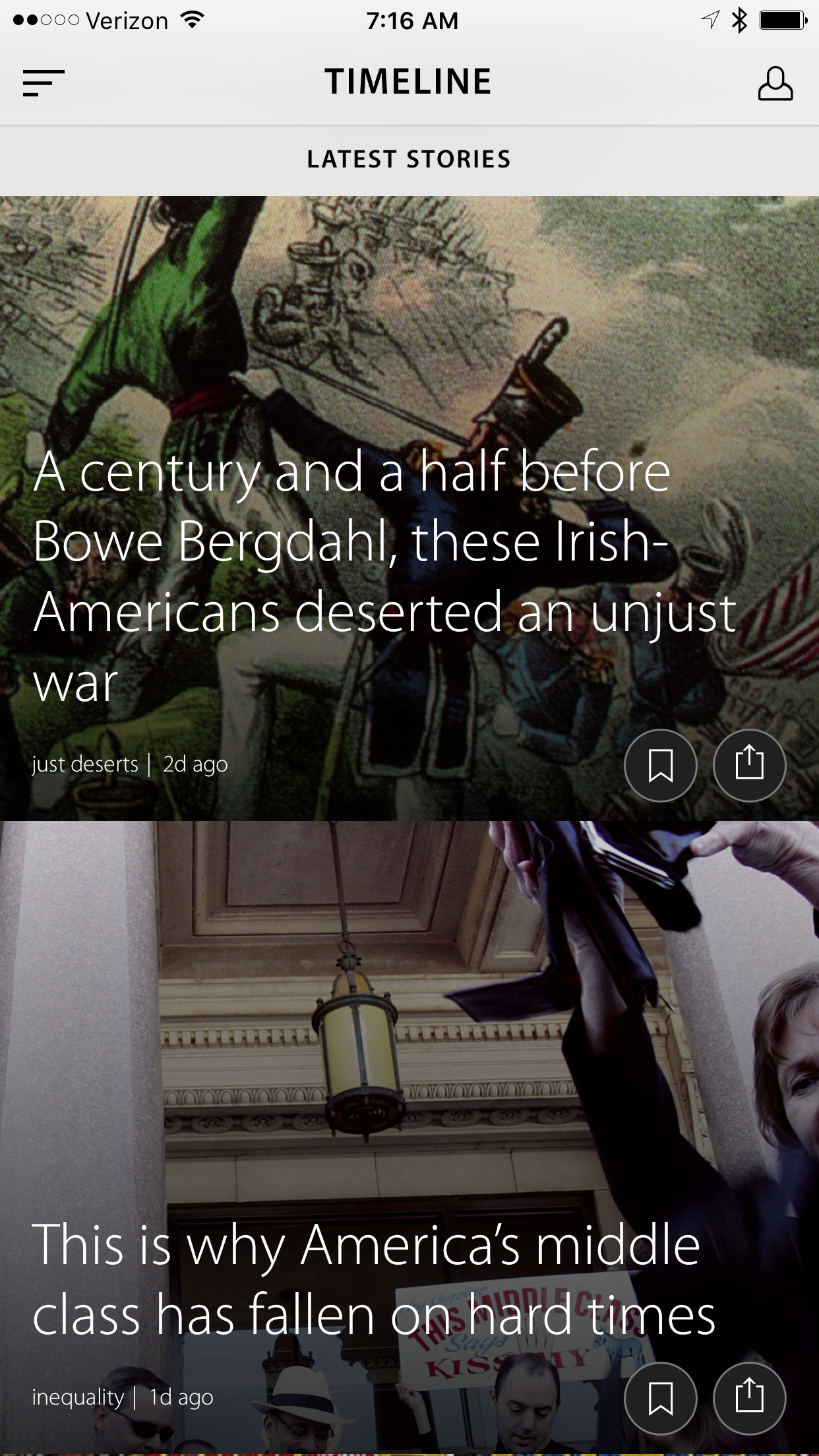 I really like how the Timeline app presents the relationships of information. It really does feel a bit more like a research tool than a news reader, which fits me just fine. 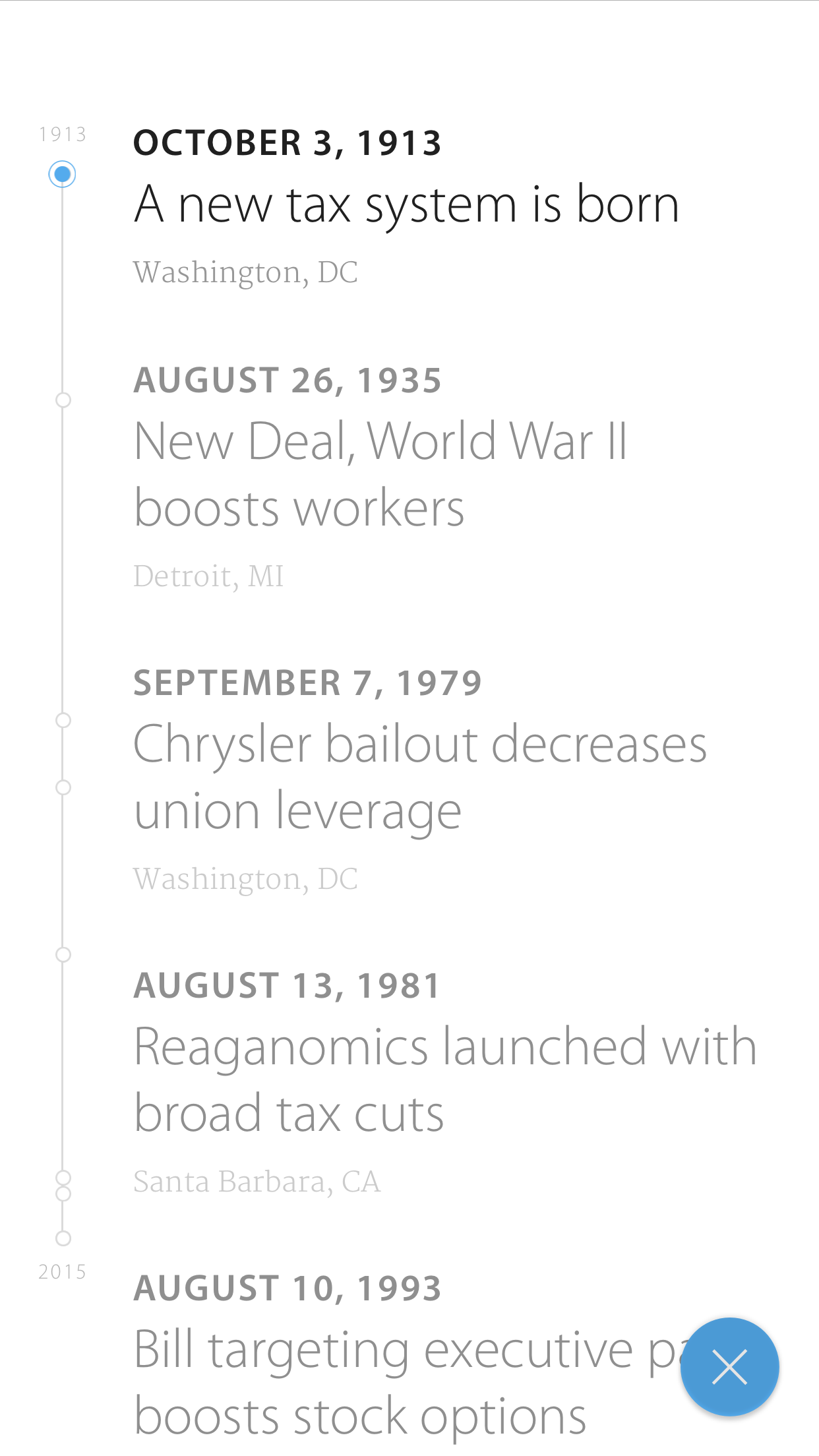 Planned Parenthood files restraining order against the state of Ohio

I especailly like the option to see their sources as well as drill further into a specific time period. 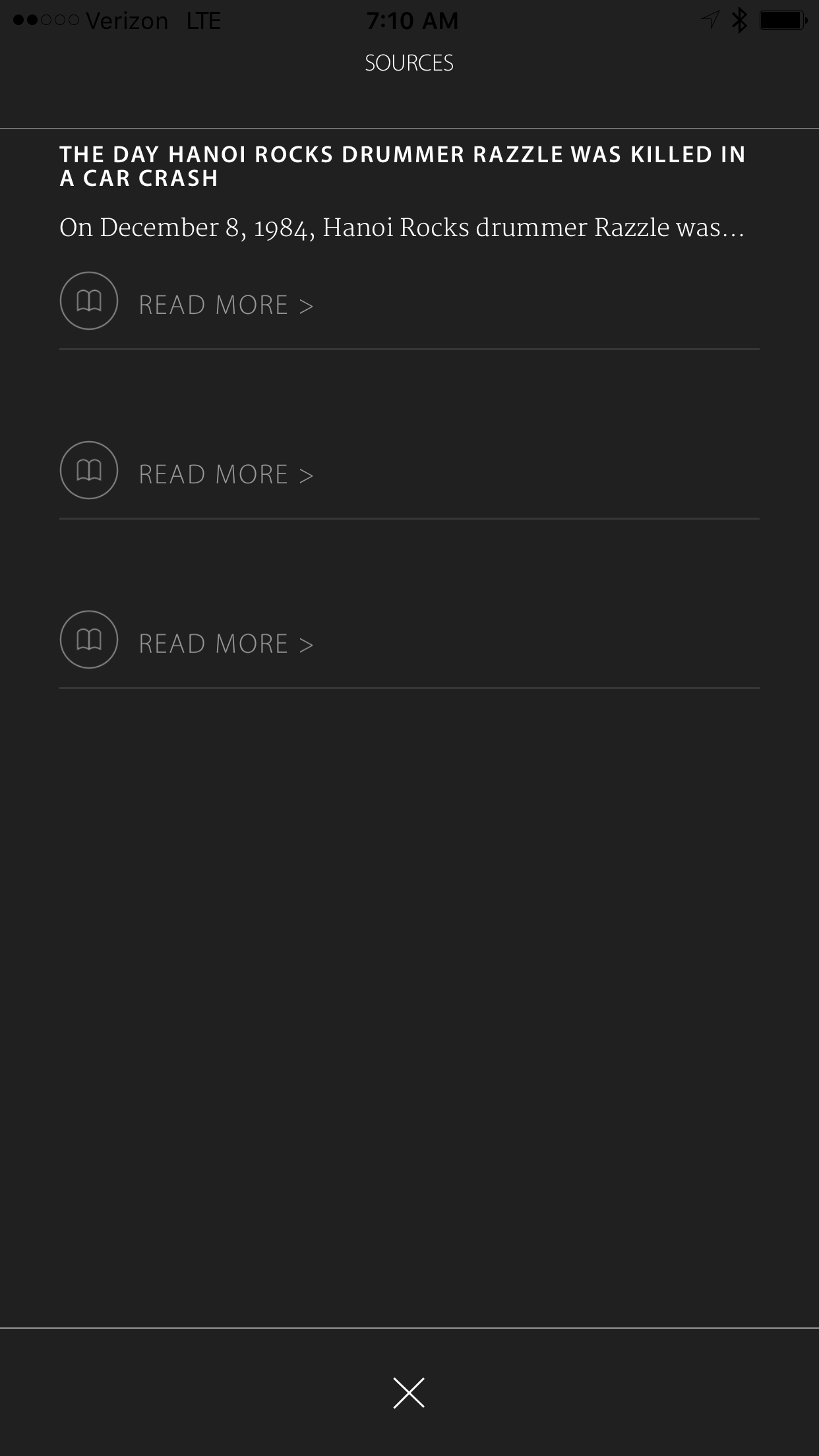 If I really like a topic in Timeline I can usually get plenty of related topics too. While the referencing and related articles can keep me reading for hours, Timeline does not produce a huge number of articles per week. I've only been interested in a few compilations per week which makes Timeline an excellent supplement to RSS but not a replacement. 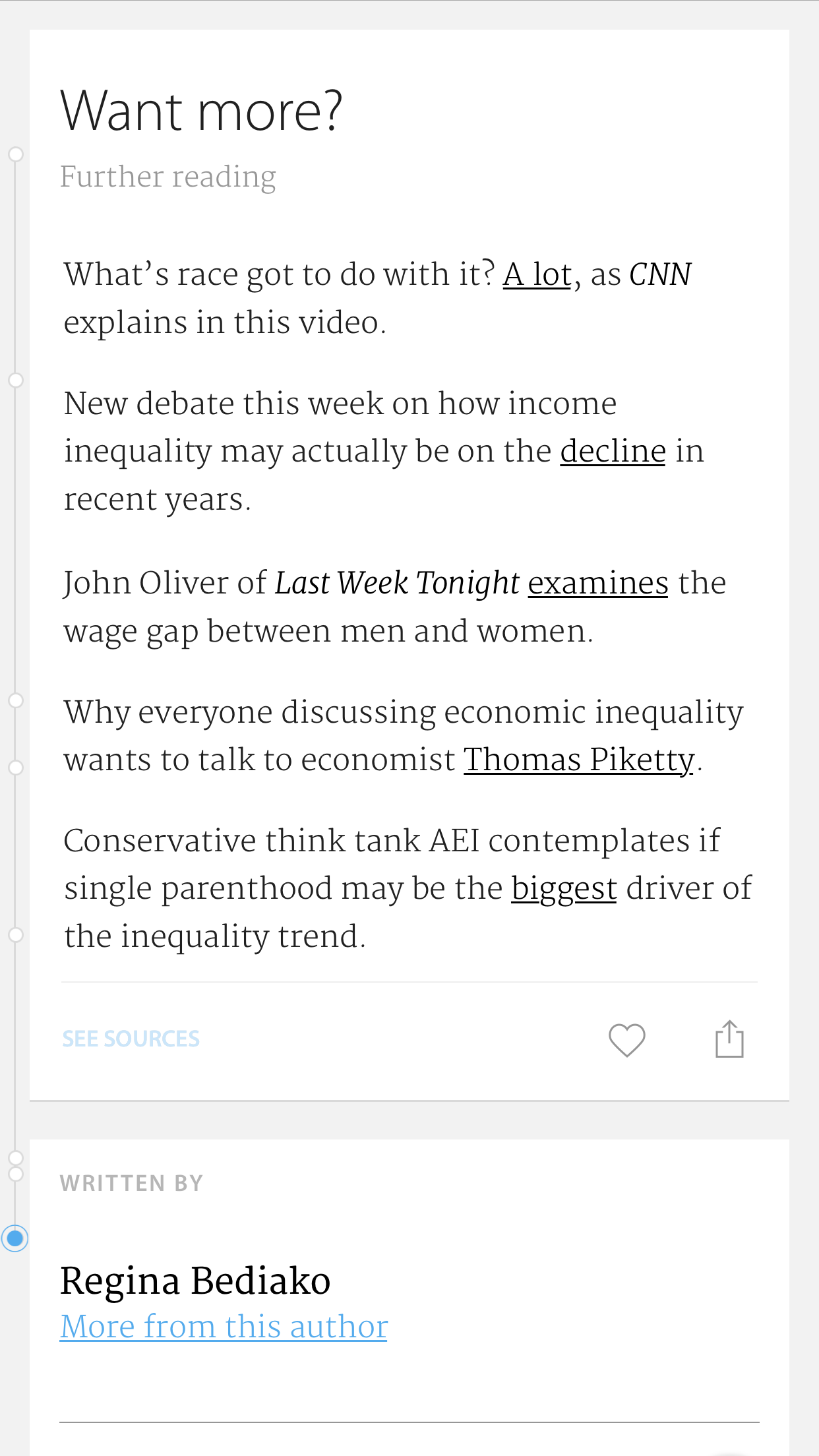 Here's something nice that both Wildcard and Timeline do. They both make sharing their unique compilations simple. Here's a link from Wildcard and one from Timeline:

Planned Parenthood files restraining order against the state of Ohio

I think the Timeline Web site is very nice and use it with equal satisfaction on my desktop. I don't have an account and don't care to. It's not necessary.

Timeline content is still very limited when I think about the wide array of sources and topics available in Zite. In particular, searching outside of its core demographic falls flat in Timeline as well as with almost every alternative. 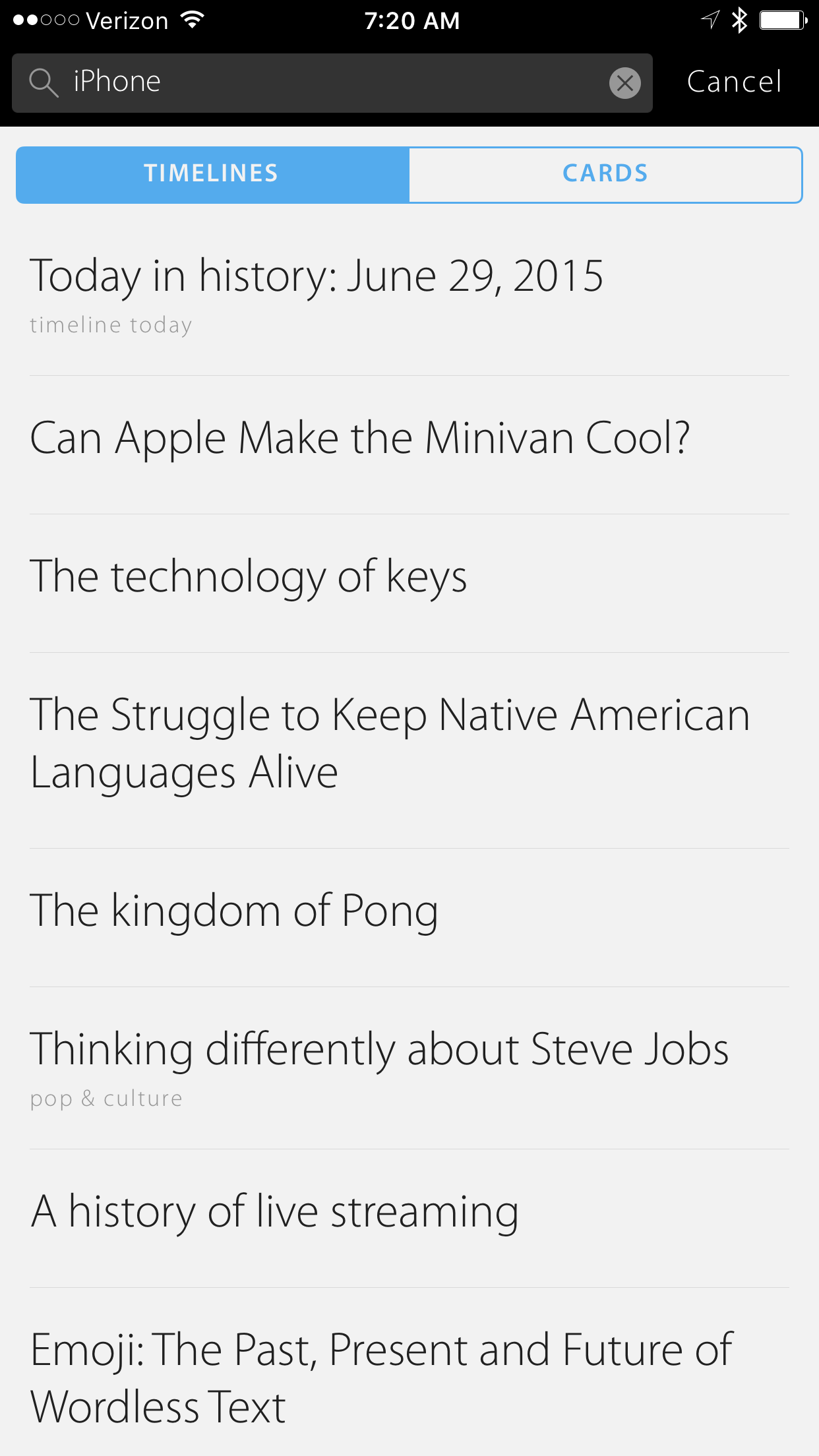 Digg swings far to the other extreme. It's mostly filled with sources I'd never look for or trust. It's just too much. For some reason, Digg links to a lot of YouTube content which is not something I really want when I'm reading news stories. 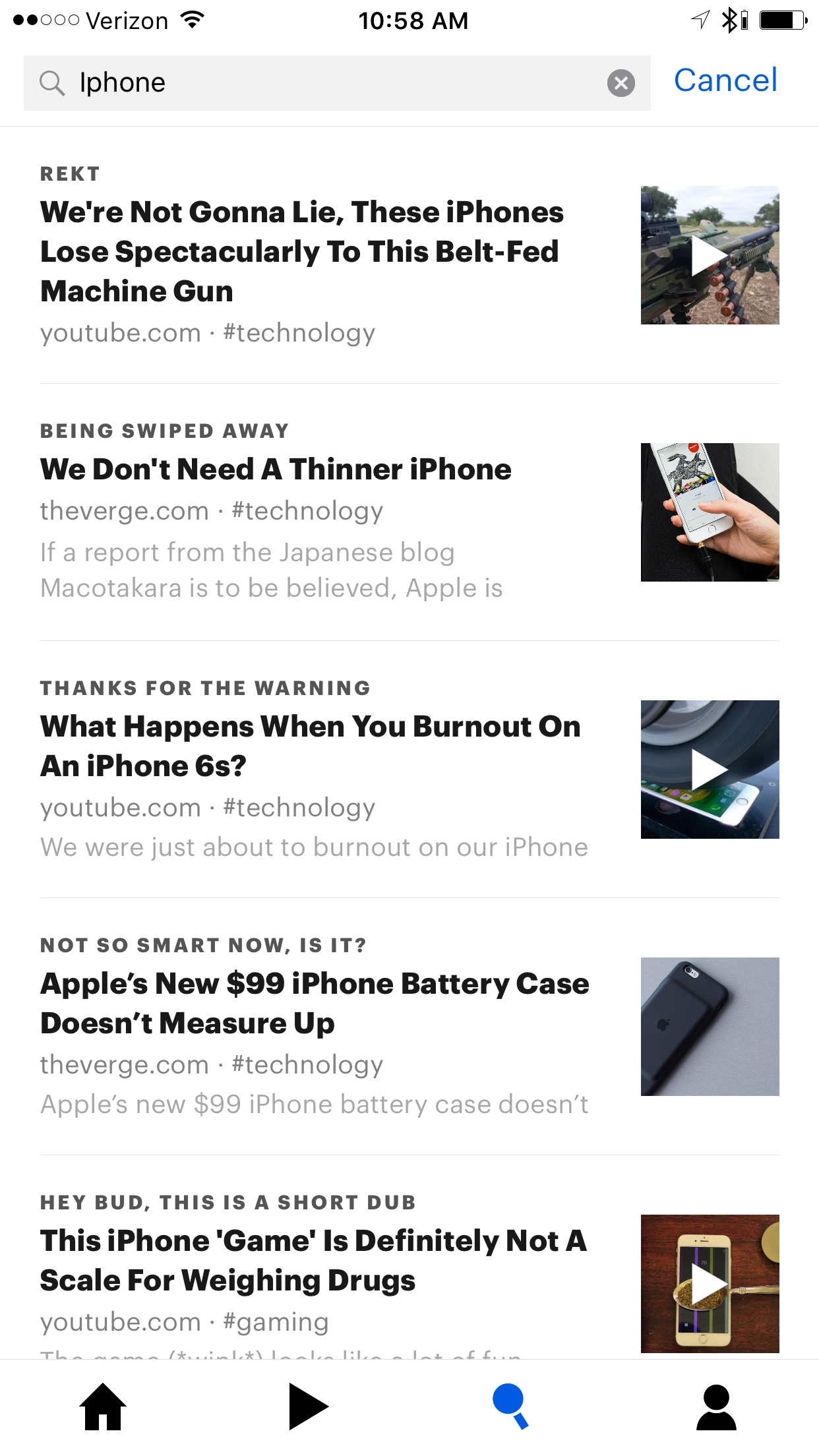 Digg provides broad categories to fish in but there's not much tuning or tweaking to get to more specific topics. 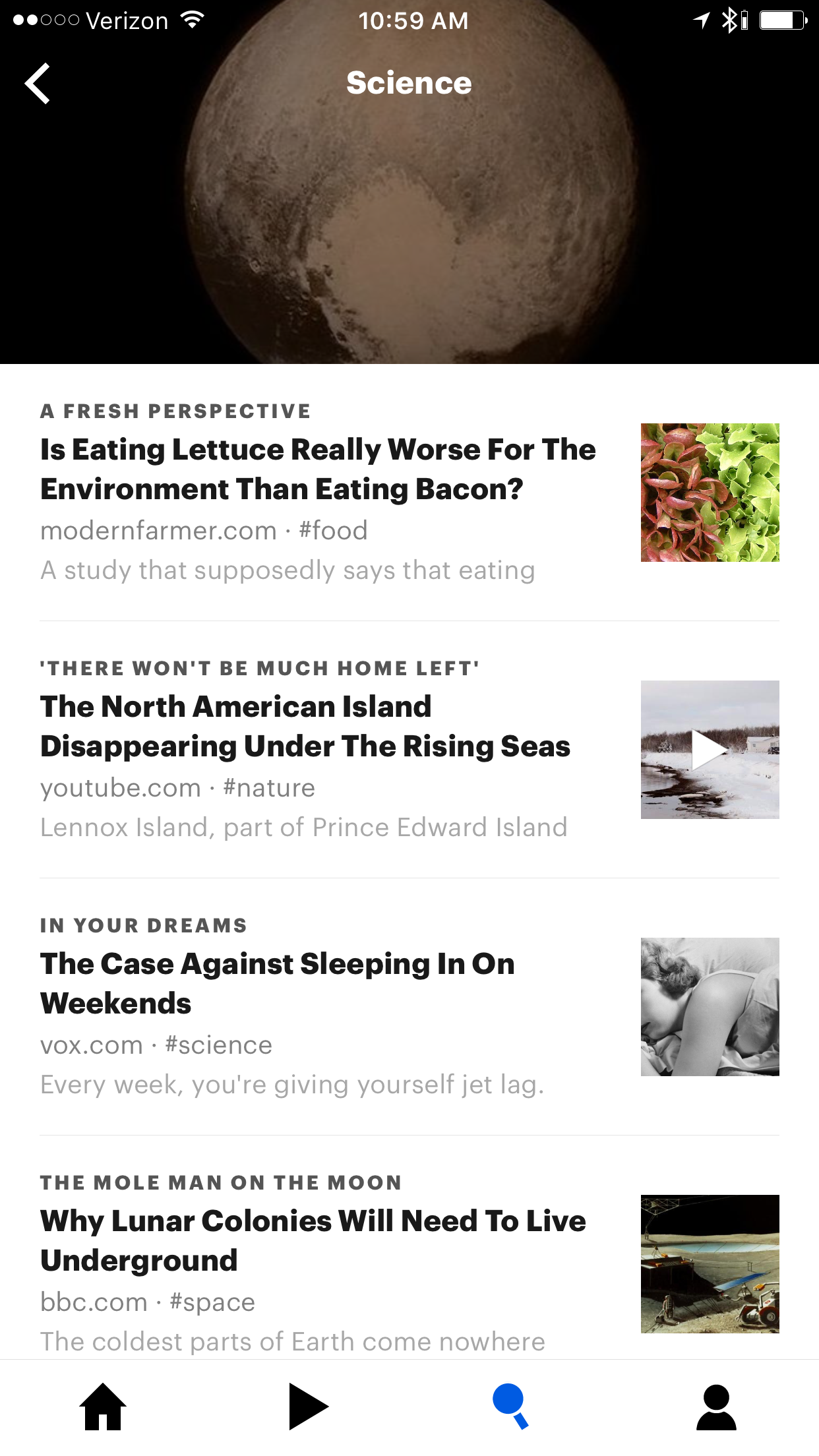 I don't often think about Digg as a place to browse for meaningful information. There's a lot of "stuff", just not the stuff I want to spend time with.

Apple News is really only on my iPhone because I can't delete it. It's not terrible but I don't find it to be interesting or an enjoyable reading experience. It only took a few times to get a truncated article in Apple News for me to lose interest. It's major function is to provide highlights of the current news along with a lot of stuff I have no interest in.

My order of preference is to start in Timeline and move to Wildcard, followed by Digg and Flipboard. Maybe I'm just not a "news" person and I'm more of an information person. I care less about seeing every minor news story in a day. Instead I want a broad set of topics covered with a unique voice and perspective. The Web should be perfect for this. I just need to find a better way to locate and connect it all.