Three years ago I opened my new 15" Retina MacBook Pro for the first time and loved it. The Retina screen is incredible. While bigger and heavier than many other models, it's still one of the lightest and thinest laptops I've owned.1 I was worried it was a downgrade from a 27" iMac, but I still can't see any reason to go back to an immobile desktop computer. I love the combination of power, portability and have a single canonical device. 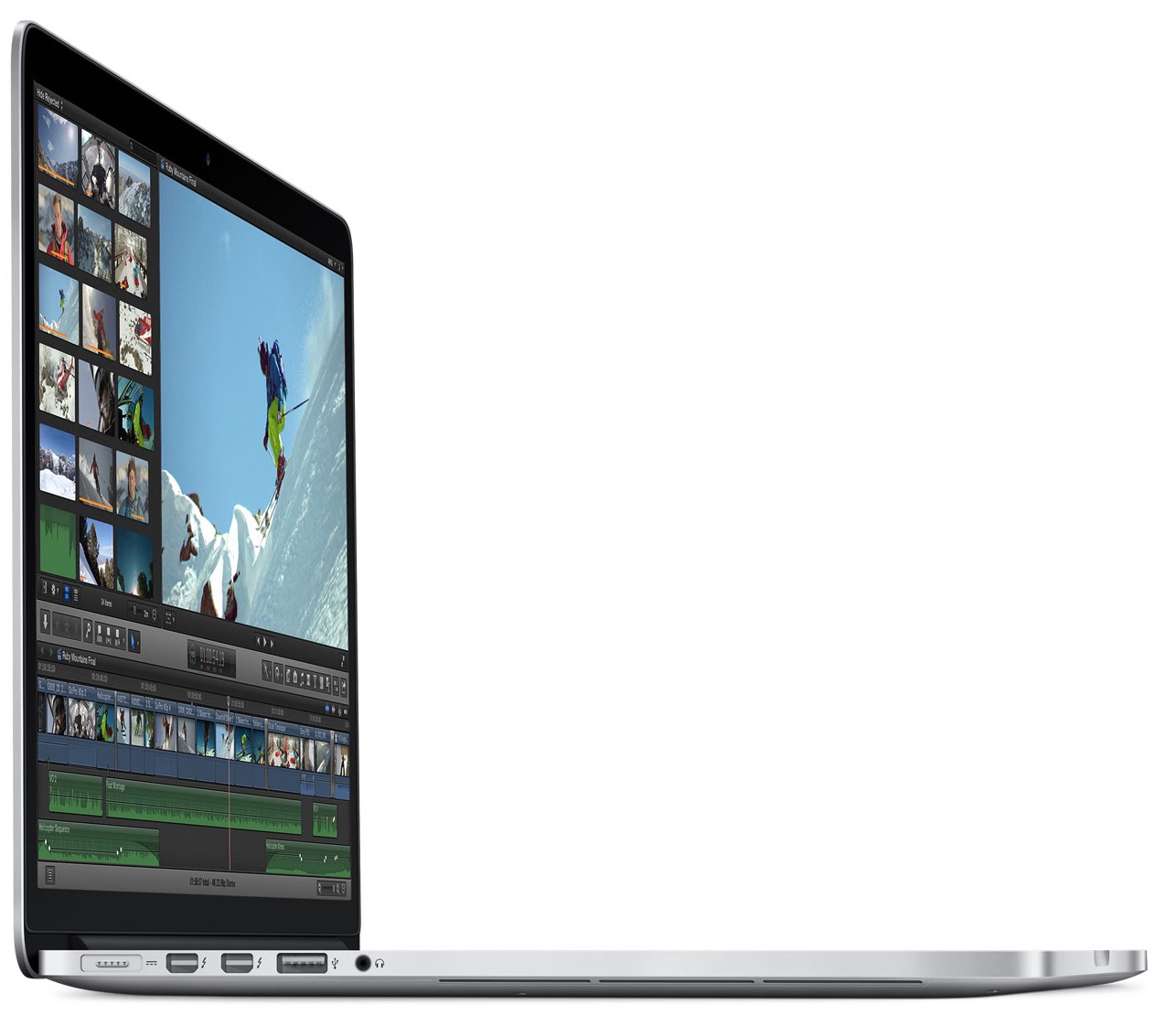 I didn't expect a lot when switching from a 2012 to 2015 model. They look very similar on a spec sheet. But we wanted to give my kid her first real computer and a 5-year old 13" MacBook Air seemed like a good way to go. So we did the family upgrade shuffle. My wife got my 2012 Retina MacBook Pro and I got a new 2015.

The difference was immediately noticeable.

Here's my baseline for testing. I completely wiped the 2012 rMBP and installed Yosemite. I installed the same applications and services on both the 2012 and 2015 and they both were using the same network connections. What I really care about is how it feels when it's running under a normal load, so each machine was tested while running the following list of applications and services:

Oh how I remember the nineties for the annual Windows re-installs. It became just something that was expected. We'd reformat a drive and reinstall all of the required drivers, patches and applications. Sometimes it was because I built a new PC. Usually it was because the entire computer felt like the hamster inside had died and gummed up the steam works.

With Macs, I've done both migrations and clean installs but never felt compelled to do regular re-installs. User migrations for a new computer generally work without a hitch in OS X and I'm up and running with little effort. But, I like clean installs because they are nice psychology experiments. Over the course of three years, I install a lot of applications, services, Python and Ruby packages and generally tweak my computer far beyond a normal state. It's not a huge amount of wasted disk space but it's a huge amount of "stuff." A clean install is a nice opportunity to reassess what I want from my computer.

This time around, I installed a short list of applications. I imported my Keyboard Maestro macros, TextExpander shortcuts and Hazel rules but I also disabled them all and only re-enabled them when an actual need presented itself.

I moved my Dock to the right side of the display, instead of the objectively correct position at the bottom. I also attempted to use Spotlight instead of Alfred. The navigation and file manipulation with Alfred is just too good. I might switch back to LaunchBar full time. The side-dock is still terrible.

The new Force Touch is a nice addition but it's not a reason to upgrade (if someone actually thought it was). I find the additional functionality to be moderately useful at best. You'll quickly forget that it's simulating a click and just treat it like a regular touchpad. At times, the single-finger Force Touch is actually annoying. I repeatedly triggered Force Touch when I really just wanted a single finger click. Maybe I have edge-case sized hands. A dozen times a day I'll trigger the Quick Looks shortcut when I really just pressed too hard while dragging a file.

One pleasant surprise came in the form of BetterTouchTool. It now includes several Force Touch options. For example, I like the 3-finger Force Touch to instantly Google selected text. 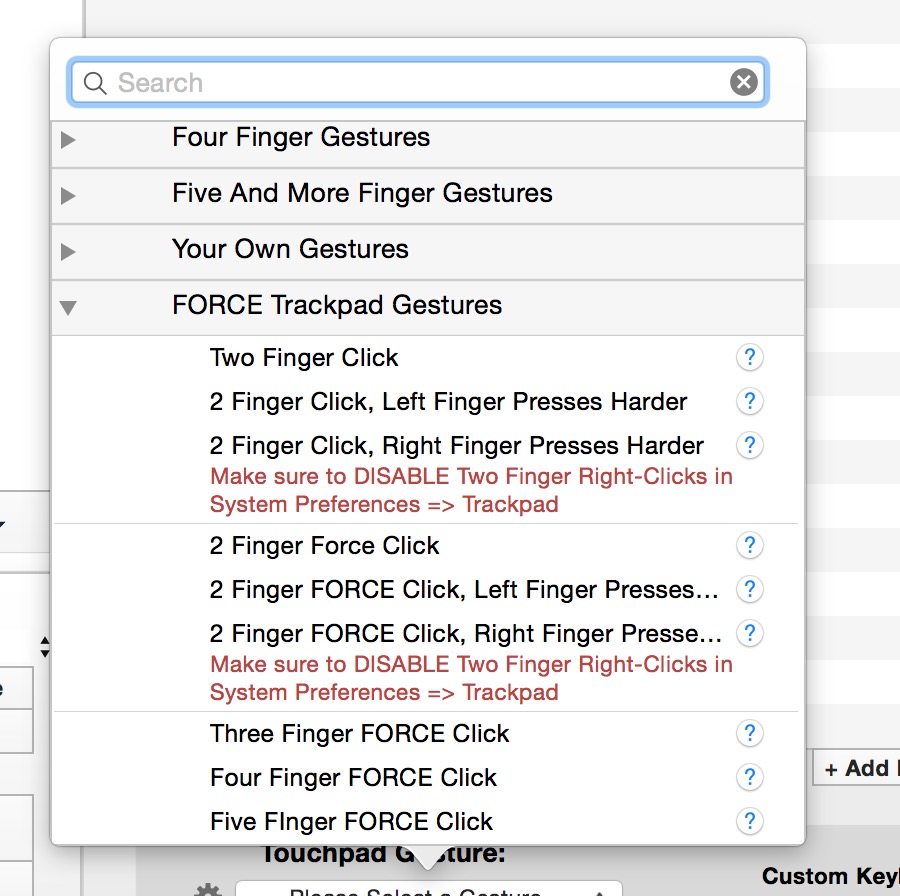 While I prefer to consider everyday performance, there's always someone looking for some metric, which is totally reasonable if you need to compare before buying. I recommend the AnandTech breakdown. Here's some crude test results that seem to correlate with my actual use.

I used the AJA drive test tool to test disk performance. I've used it in the past and it also agreed with competing test tools as well as my subjective experience.

I used Geeks3D test tool for OpenGL testing. I have no idea if this is reliable. 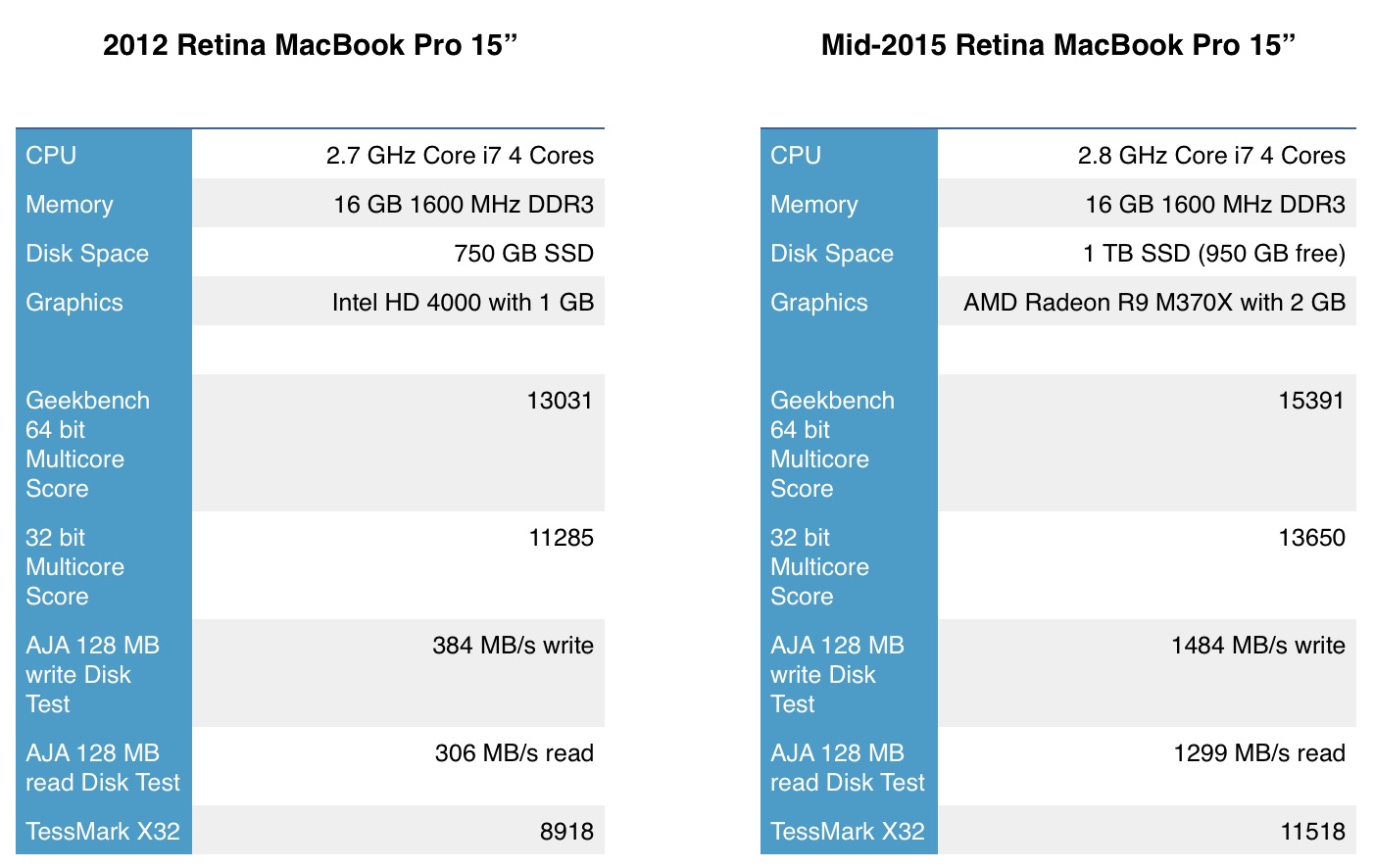 The two sets of results show that the CPU is an insignificant boost for my needs.

An important note about the GPU testing is that the fan for the 2012 rMBP blazed throughout the test while it was barely noticeable on the 2015 model.

The major improvement for this upgrade was the disk performance of the mid-2015 rMBP. Those are crazy read/write numbers and are probably why the new model feels so much faster. I thought SSD performance increase would be negligible but I really do feel a difference.

As expected, the battery life of a new MacBook Pro is shockingly better than a three year old, constantly cycled version. I hardly even think about charging this new computer. It's difficult to compare with how I felt three years ago but this one absolutely feels great now. When Apple says "9 hours battery life" they mean while actually using the computer for normal work on WiFi with the screen brightness on auto and the lots of applications running.

The mid-2015 Retina MacBook Pro feels faster in every way that matters to me. Boot time is shorter. App launch is faster. File operations feel incredibly fast.2 I think we're well beyond the point where CPUs matter much in any category other than battery life. I'm sure they matter to someone, but the current configuration is mind blowingly fast to me.

The new SSD performance is shocking too. Just like upgrading a 5400 rpm disk to an SSD makes it feel like an entirely new computer, this new 4x PCI SSD is a noticeably great improvement.

I also forgot how terrible a new MacBook Pro keyboard feels. It feels cheap until you beat on the keys for a few hours.

The MagSafe 2 connector on the mid-2015 model has a much stronger magnet than the 2012. This is a welcome change.

It's a nice upgrade. I have buyers ambivalence. I don't regret the purchase but I'm also not high-fiving myself for the keen sense of value. It's the nicest computer I've ever owned, just like I bet the next one will be in 3-4 years.