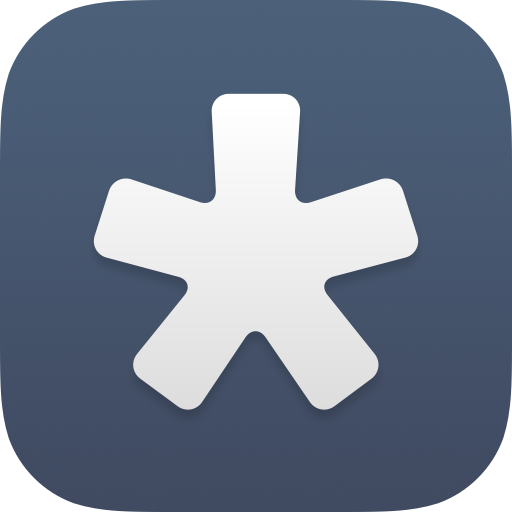 If you own an iOS device and use words a lot you probably have Editorial on your home screen. Hi, me too. Today we get to rejoice because it's the annual update of Editorial!1 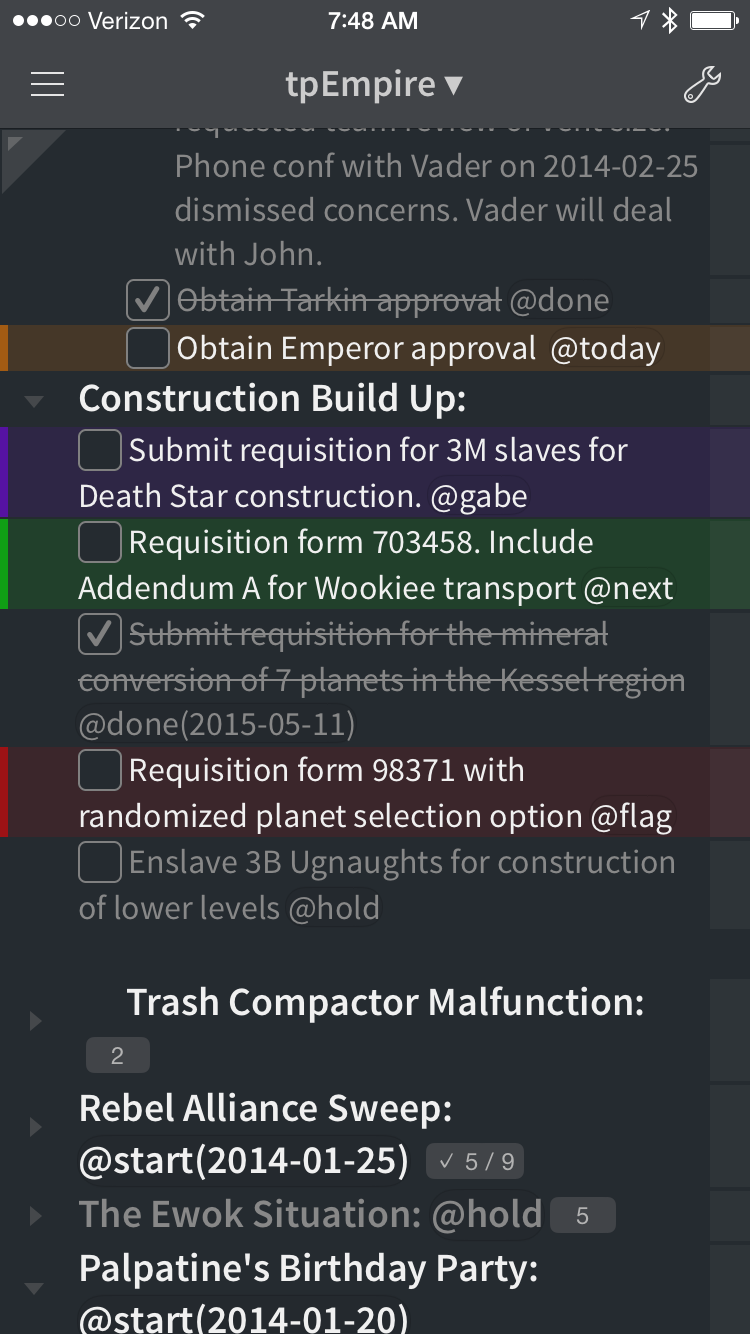 I'll save some general discussion about iOS text editors for the end because I think most people just come to find out what's new. If that catches your attention you might stick around to find out a bit more about how I use this stuff all day, every day.

Now you can manage tasks in Editorial like a boss.2 Editorial provides built-in support for the TaskPaper format with handling of projects, tag highlighting and completing tasks for files saved with the .taskpaper extension. The iPhone version now has feature parity of the task management features, including check boxes and drag handles to move tasks up and down a list.

First, jump into the Editorial preferences and make a few tweaks. Editorial will highlight lines with user configured tags. 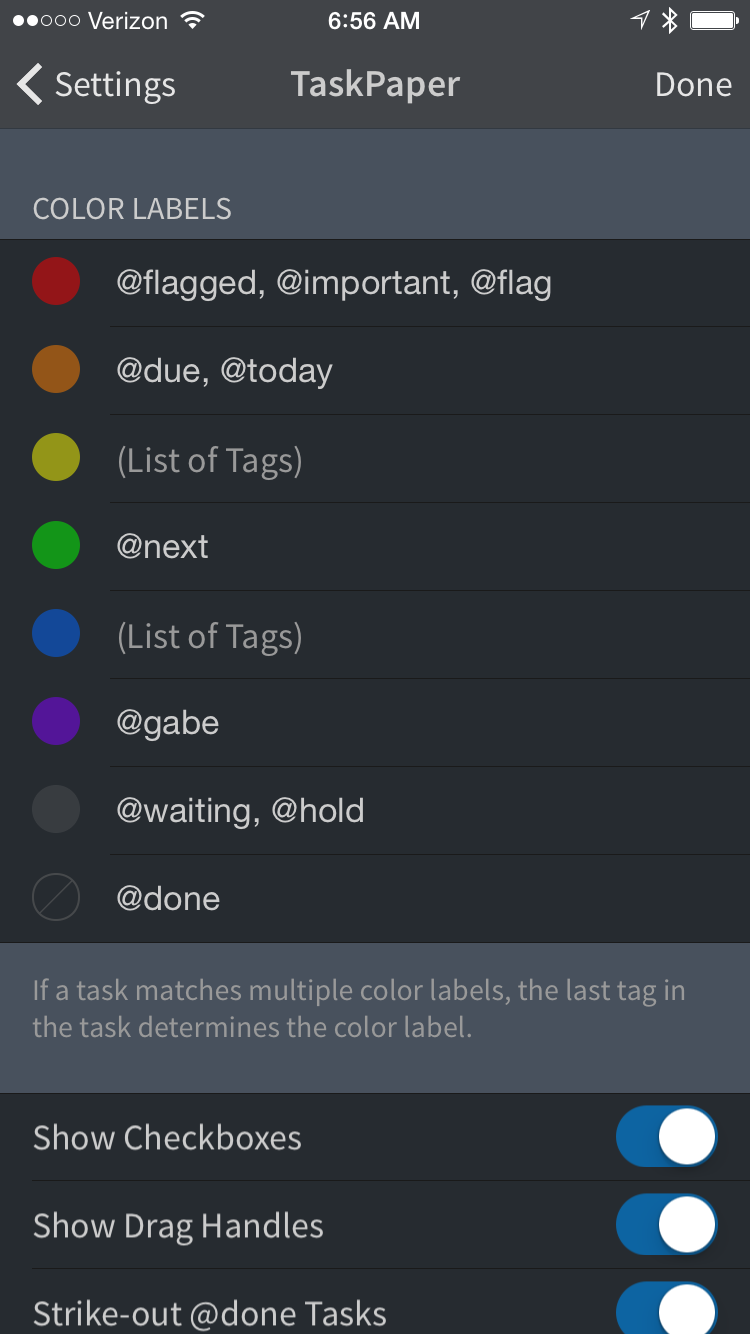 Taskpaper files are easily differentiated in the Editorial file browser. 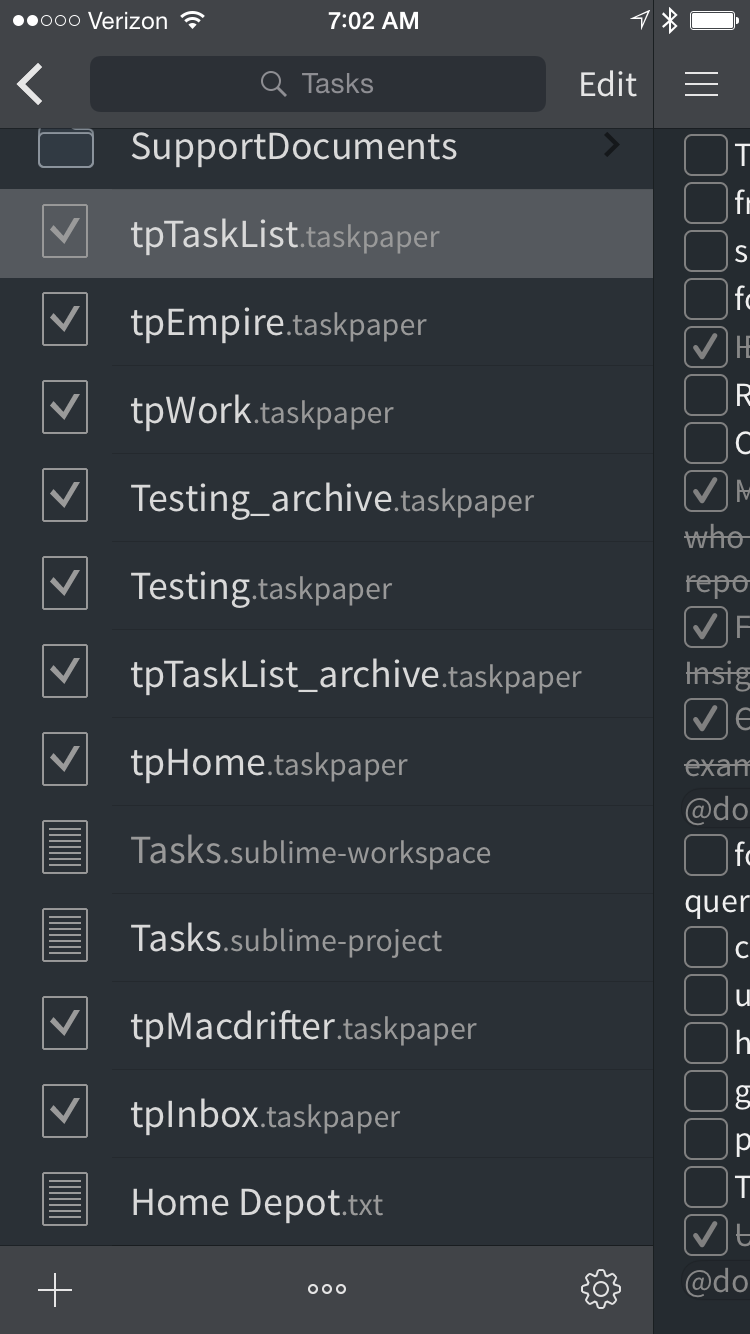 The project view is very helpful. Open the list and tap a sub-project to instantly jump there in the document. 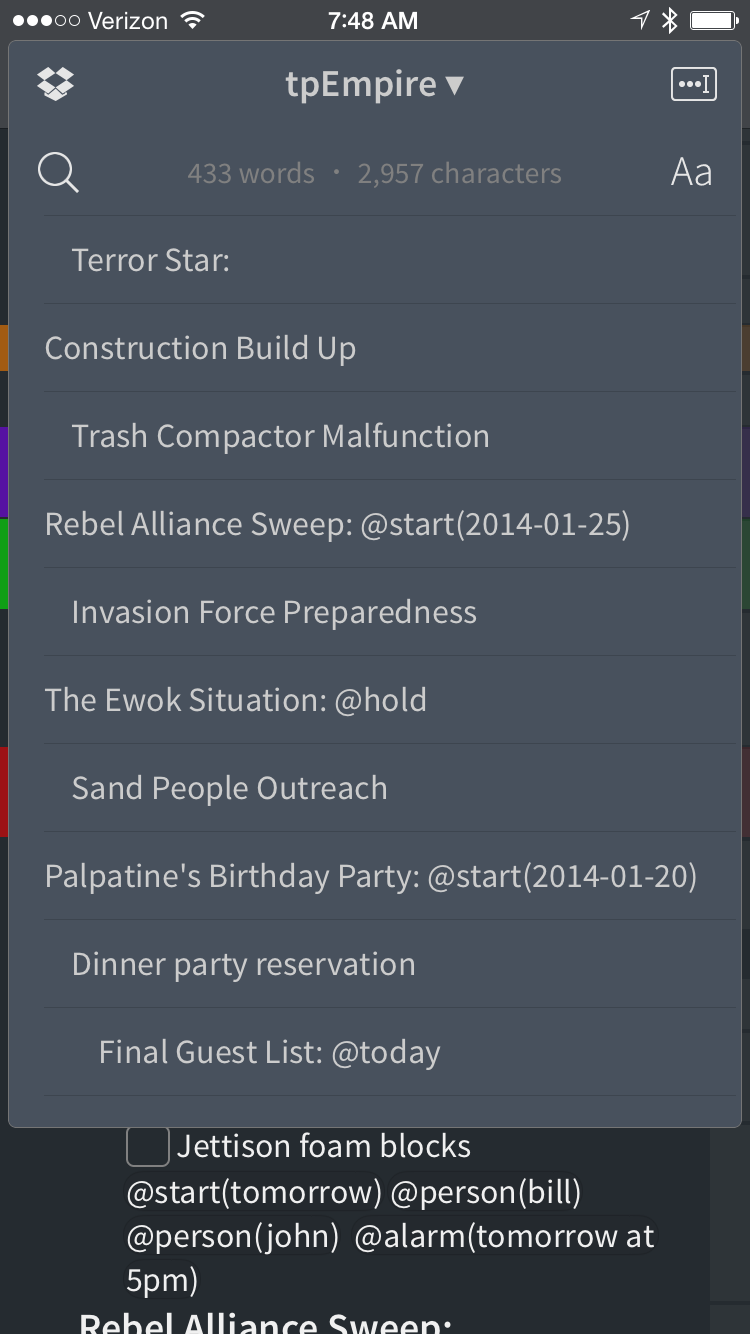 New in version 1.2 is support for folding text blocks with folding and unfolding actions in the workflow collection. The Fold action works on either the current selection of a specified range. The Fold Lines Containing... action uses a regular expression to fold lines that match. The important thing to remember with these actions is that they are additive. You can fold based on one term and then fold other lines based on another term. You don't need some ferocious regular expression to do it all at once. 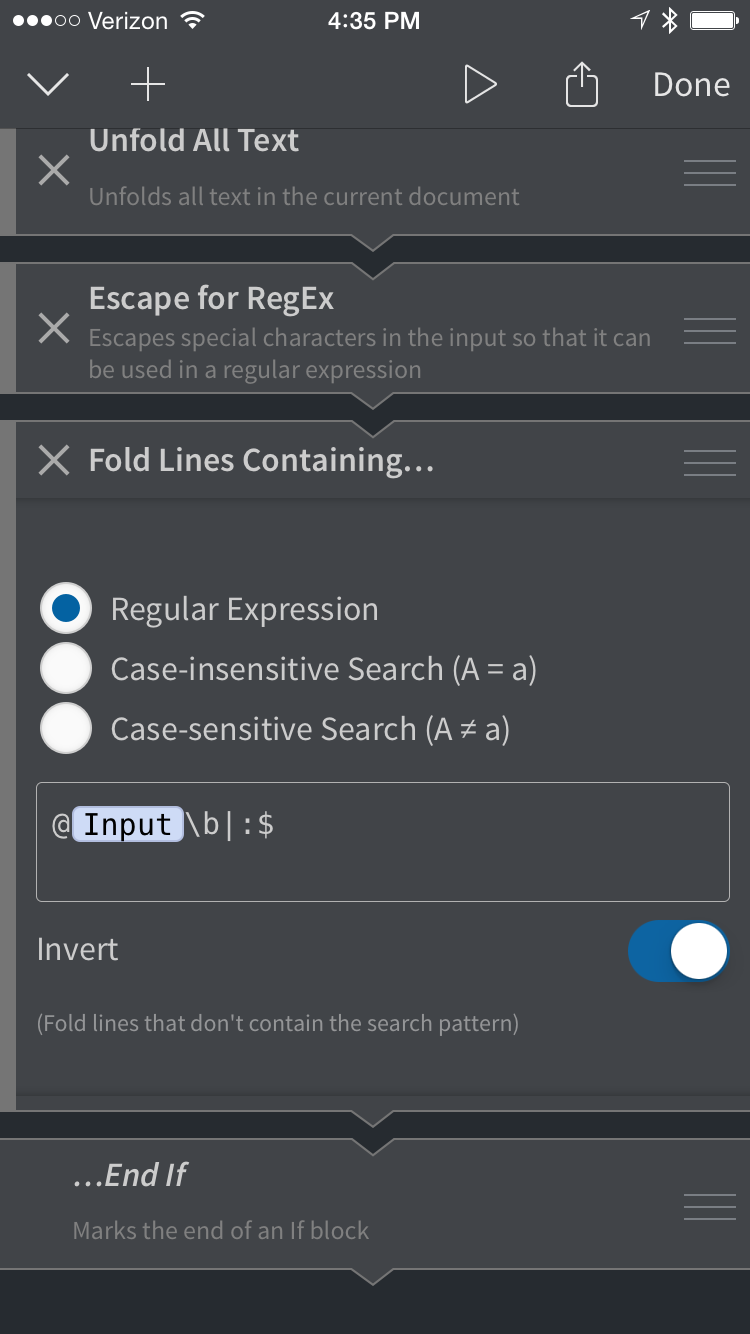 There are also new python methods for folding text from within a script. If you're really adventurous you can take advantage of the new Reminders module reading or editing items in the iOS Reminders list. There's a lot to feast on in this update.

This is an Editorial script that I use many times a day. I've added it as an action on almost all of my Taskpaper macros. The script processes every line of the Taskpaper looking for @due tags that contain dates with the format YYYY-MM-DD and evaluating those against today's date. If the date is equal to or less than today, it changes the tag to @today. 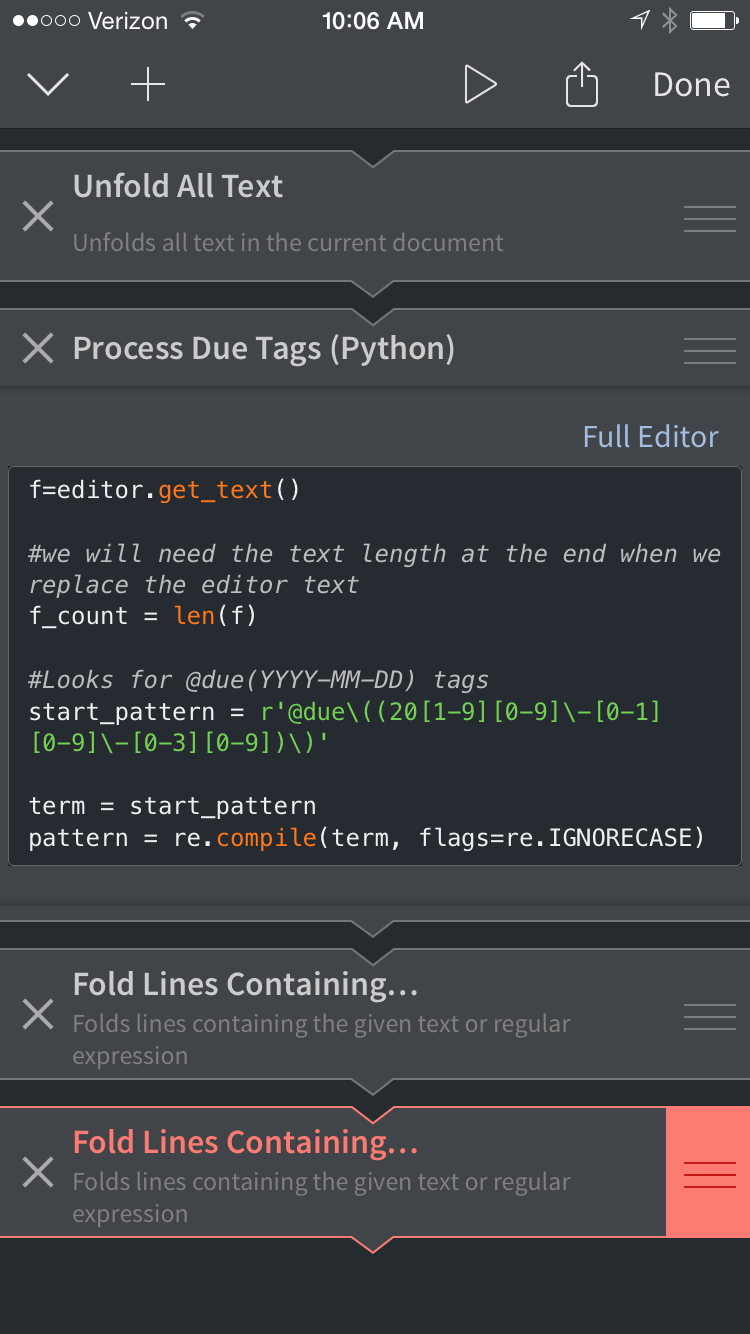 Below is the python script that does the work. I've saved this as a custom action and add it to almost every script that interacts with taskpaper files. This way I'm continually checking my tasks to see if I've hit a due date.

Here's an Editorial workflow that combines the script with folding actions to create a next action view.

There's already great work going on in the Editorial community to extend these new folding functions along with the Taskpaper support.3

At first, the new document template feature seems nice but simple. It's not. It's nice and very powerful. Document Templates in Editorial 1.2 are really just macros that execute before you open a document. Out of the box, there are some simple templates that create new documents with different file extensions. But this is the least a template can do. 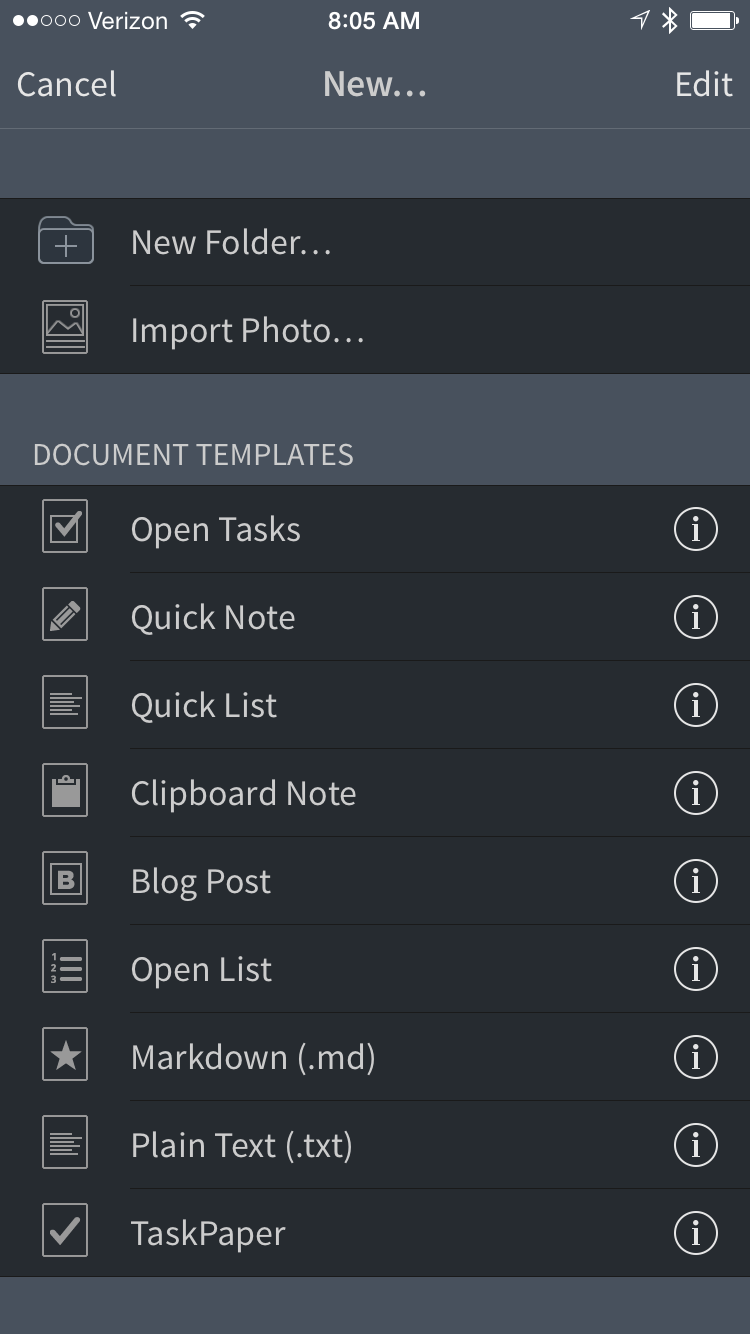 You build a document template as you would any other Editorial macro. All of the normal actions are available but you start with the "New Document" action already sitting there.

Here's a "basic" template that I use for general notes. This template asks for a document title and then creates a new file with a file name that includes a time stamp like 2015-06-14_074246. It also adds a couple header lines in the file and positions the cursor ready to type. Simple but helpful. 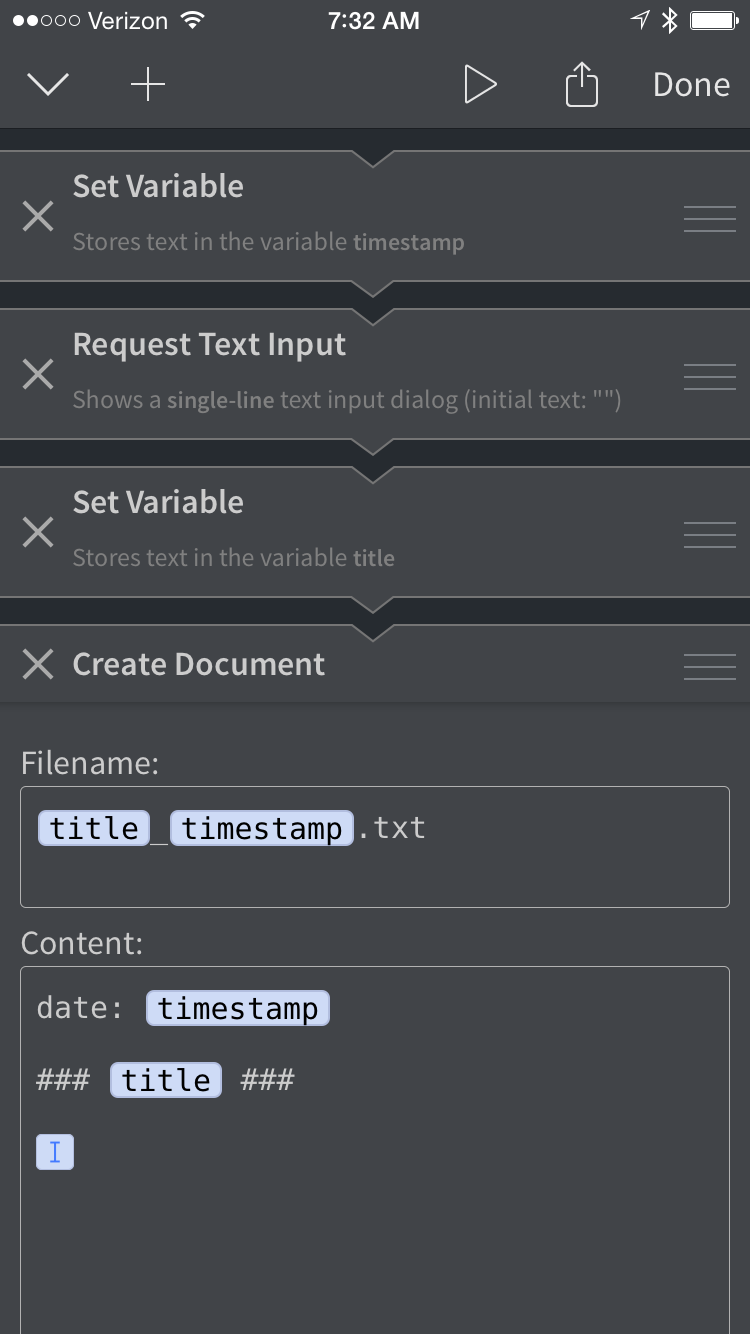 This idea can be extended by a lot. For example here's a template that uses the clipboard contents to create a new document. There are no prompts and nothing to edit (thanks to that little toggle at the bottom of the action). The document is created and we're done. 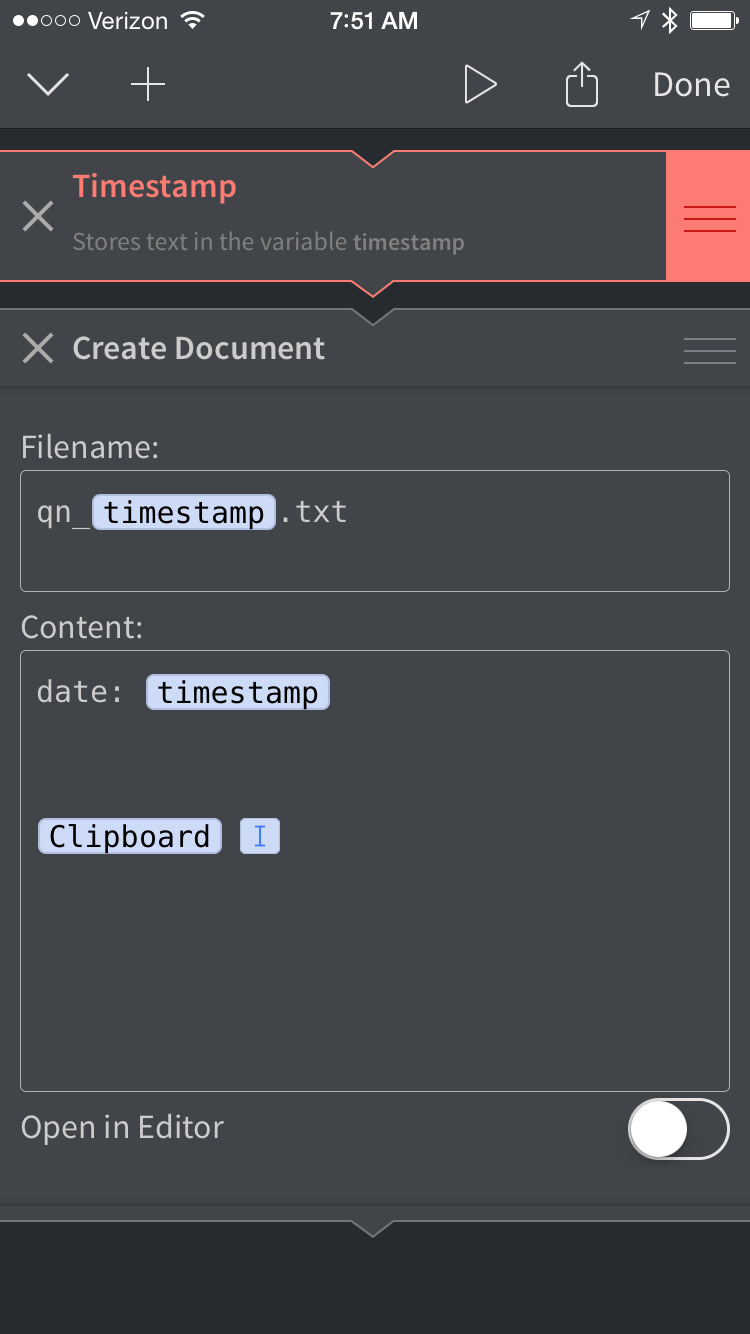 Document templates save me so much work, I actually prefer to start blog posts in Editorial. I get all of the YAML headers I need and the title is automatically inserted as Title Case. 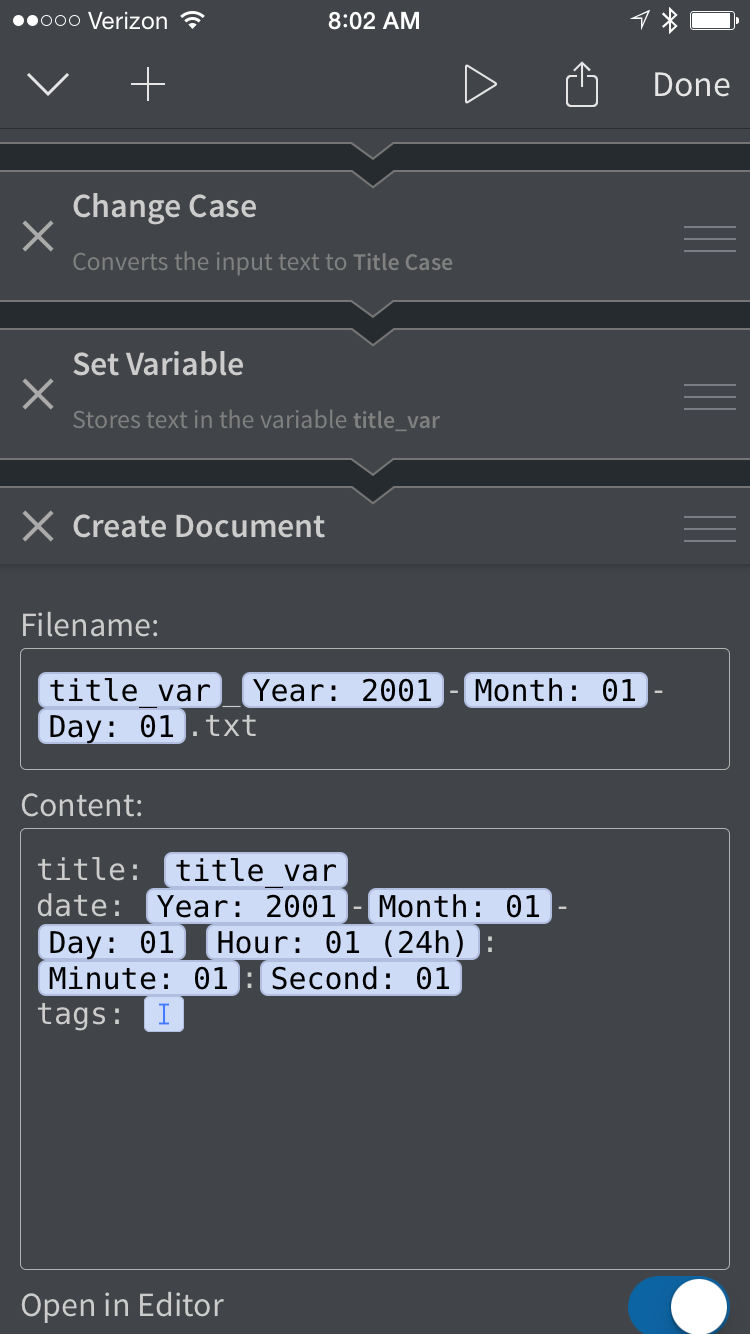 Here's a bit of a revelation: Document Templates do not need to create anything. They can be shortcuts to open files too.

Let's extend this a bit more. I have several list files where I track collections of things and notes about them. Book recommendations, movies I want to watch, even gifts I want to buy for people are all in these plain text files. Here's a New Document template that shows a list of lists to select from and then opens that file. The cursor is placed at the end of the list ready to add something new. 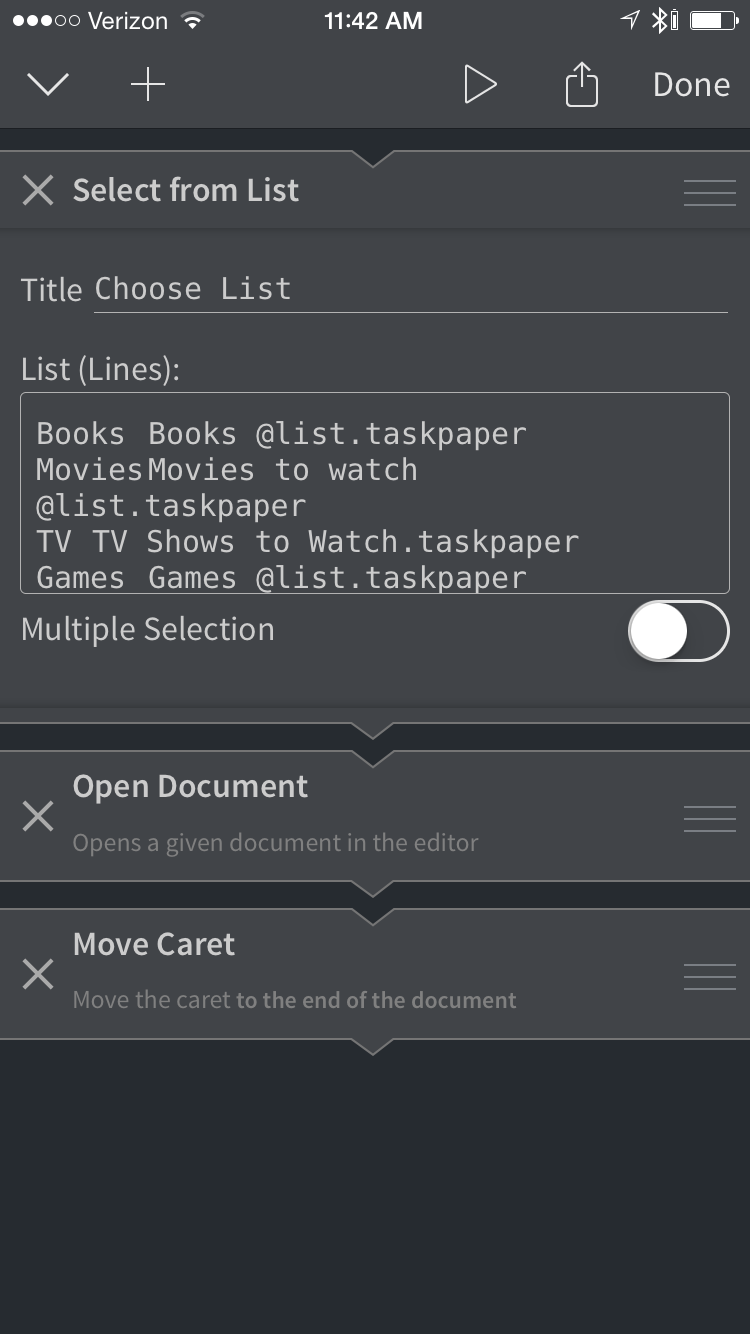 It's a simple enough macro. Each line of the list action is an item to show in the selection list. Each item is followed by a tab and then the file name to open when that item is selected from the list.

I previously used plain old .txt files for these lists. However, using the .taskpaper extension means that Editorial gives me extra utility without any extra effort. I can check items off and add notes that look nice too. I've tried keeping these in Reminders.app but it just created clutter and Reminders sucks for adding notes and links.

Of course, templates are optional in Editorial 1.2. You can always configure it to use a default for new files instead. 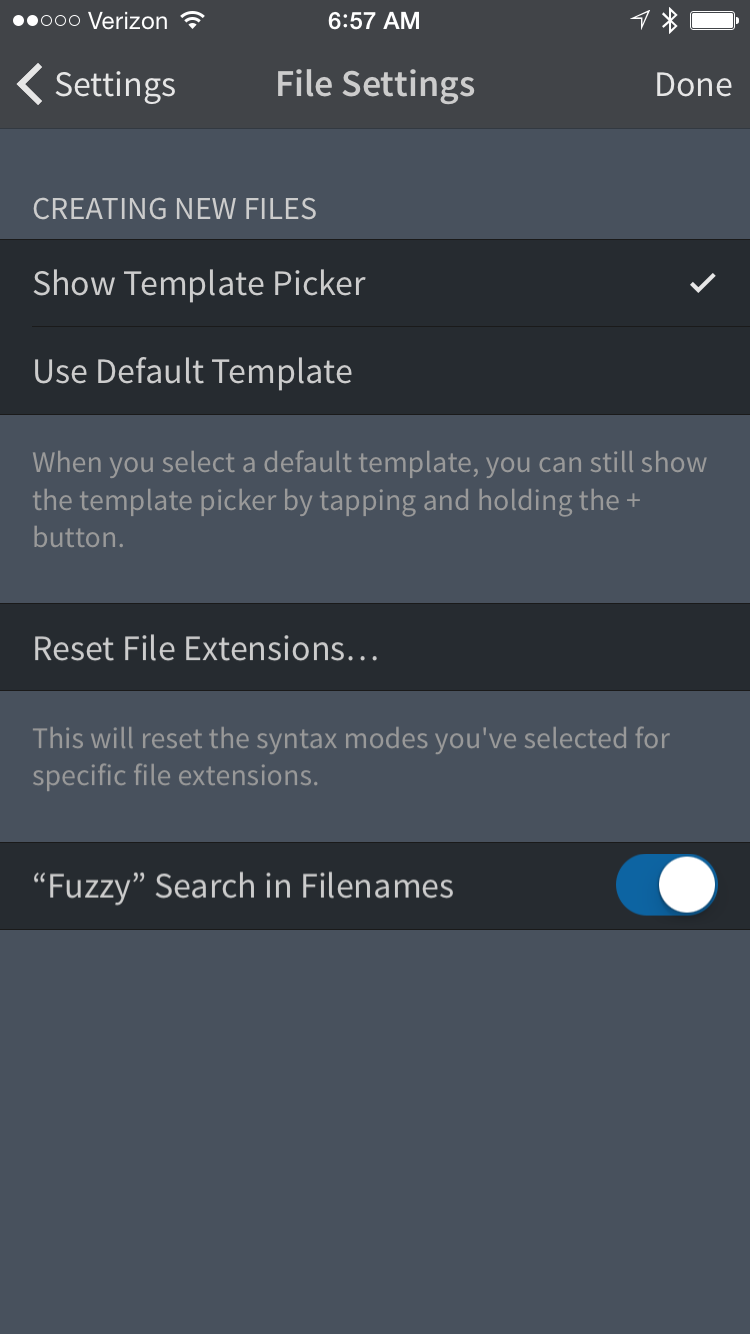 There are a lot of changes throughout Editorial. From little improvements to manual syncing to large changes in the section viewer. 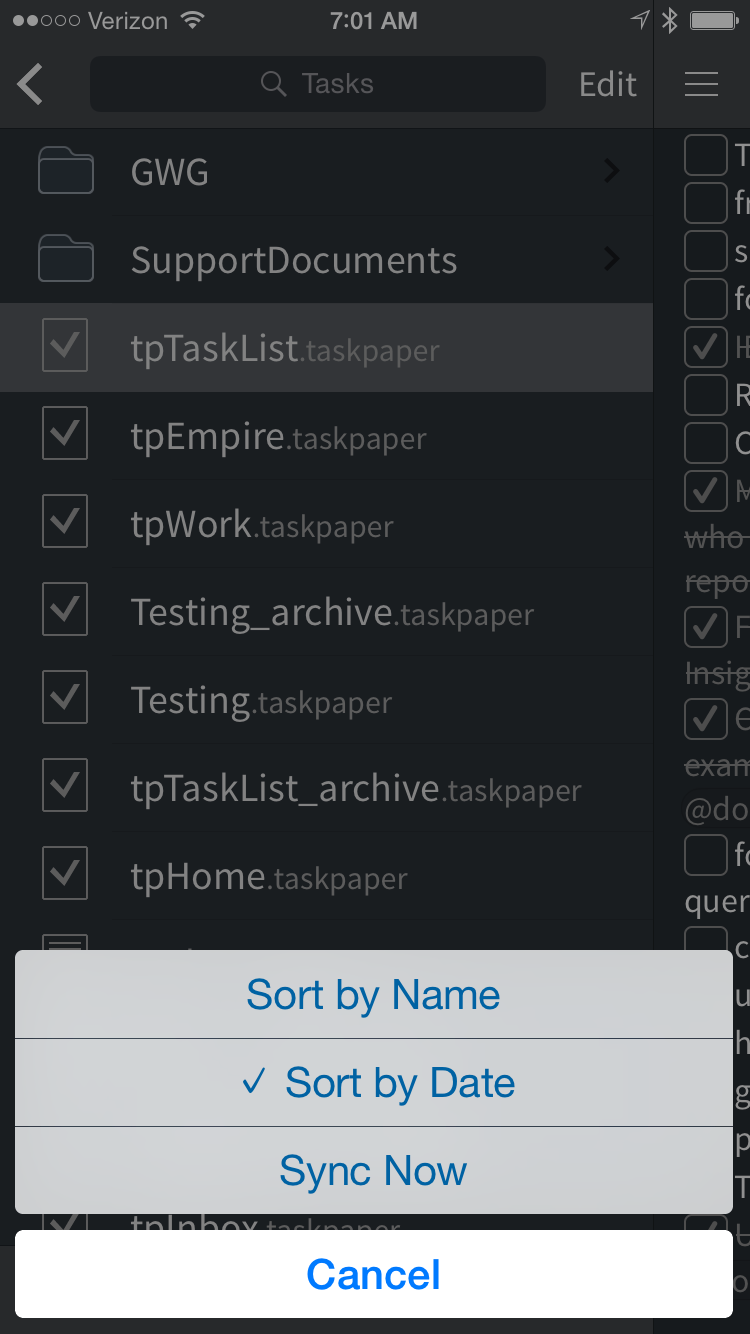 The new tabbed view for accessory panels is nice but takes a bit of getting comfortable with on the iPhone. One huge advantage of the new design is accessing multiple documentation pages and Web sites at the same time.4 There's also integrated support for 1Password in the built in browser. How nice is that? 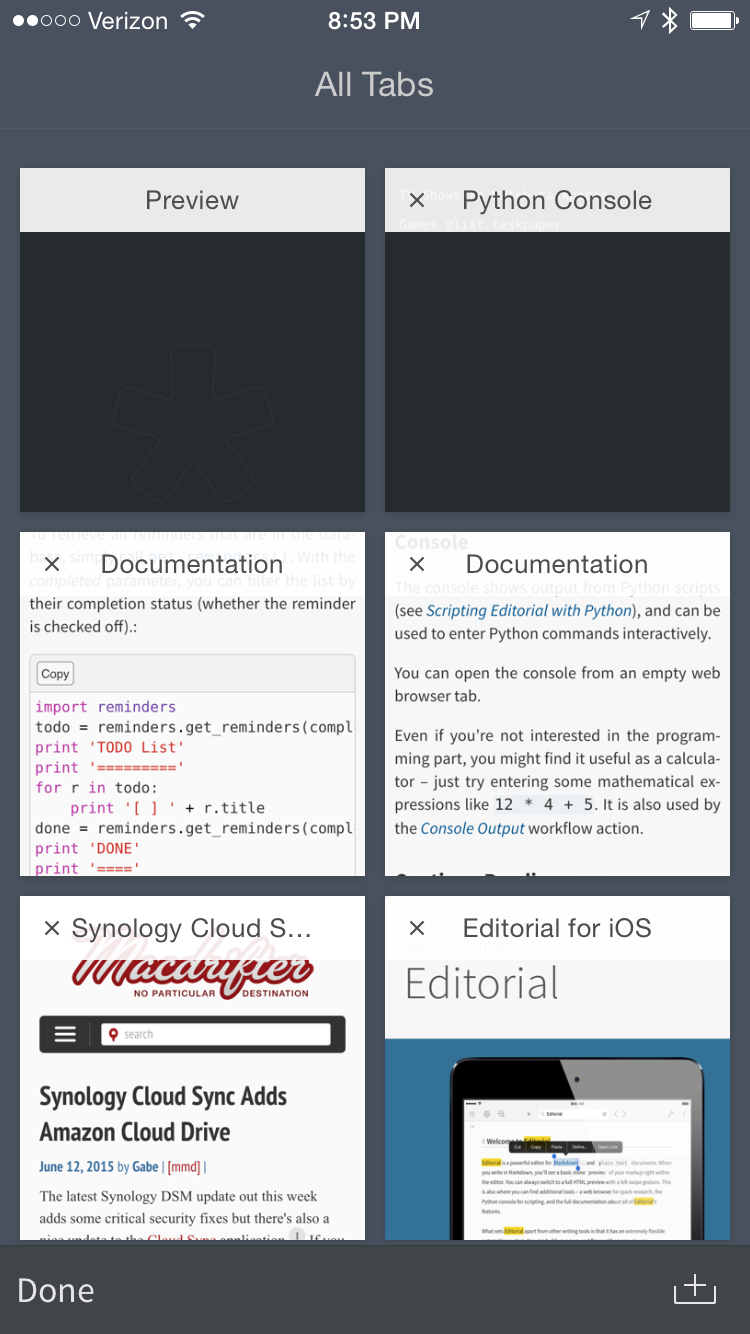 You can now view Critic Markup or Fountain files with beautiful formatting right in the Editorial editor. 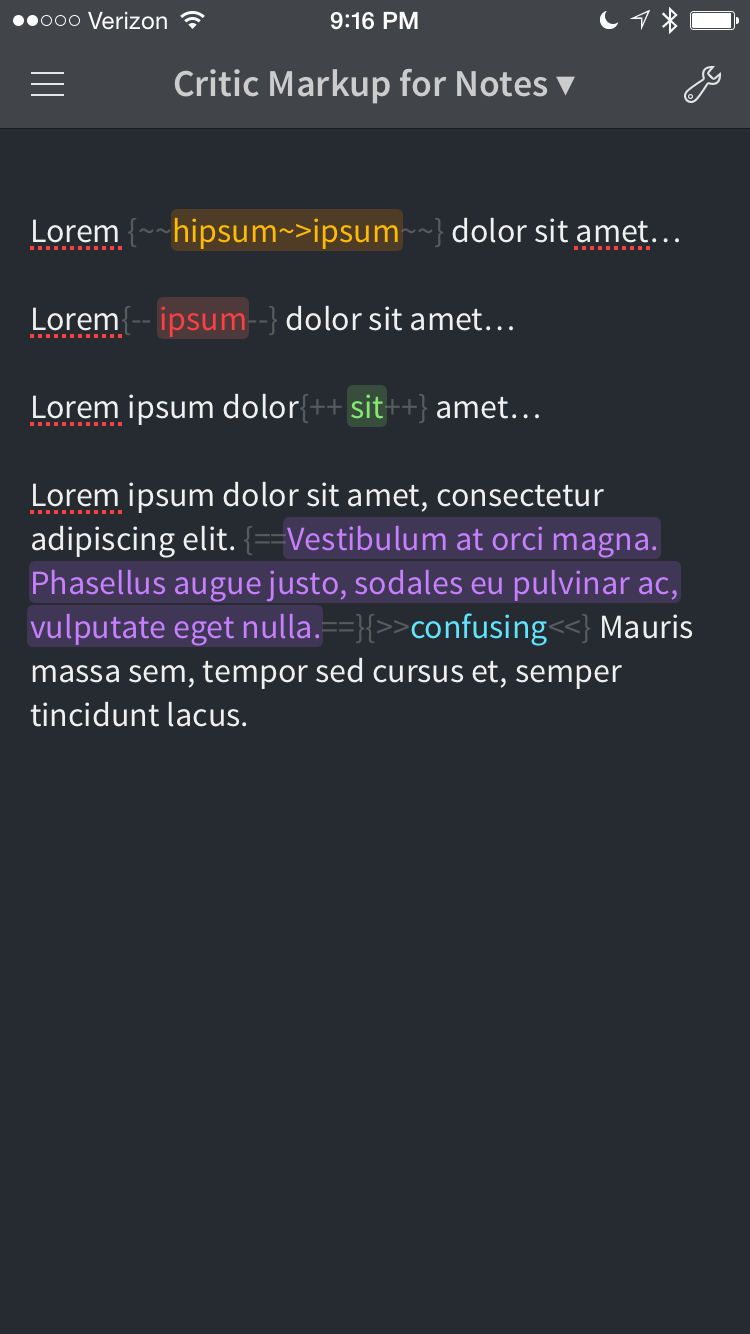 Syntax support is all around better in Editorial 1.2. While it's not intended to be a code editor, there's support for syntax highlighting of a variety of common formats. 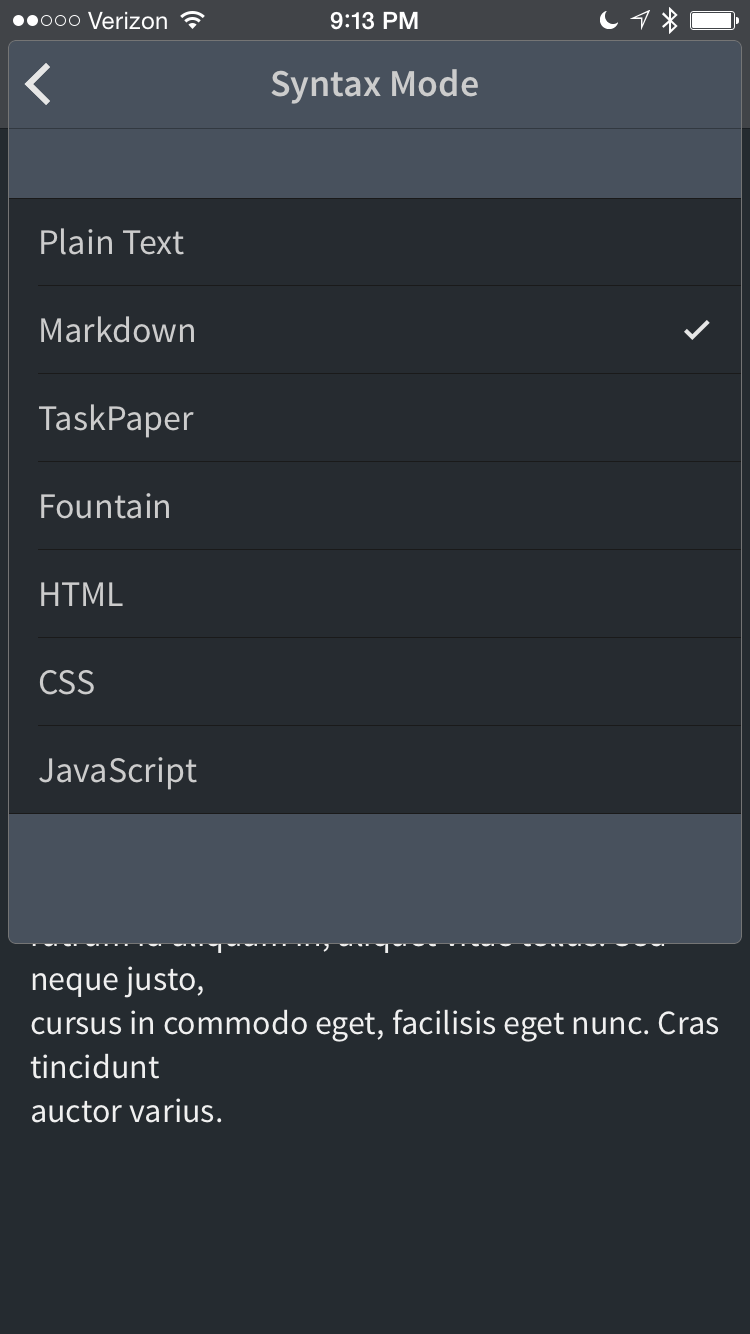 The new quick settings option in the editor view (tap the document title) is terrific too. Zoom text or just quickly turn on word count. 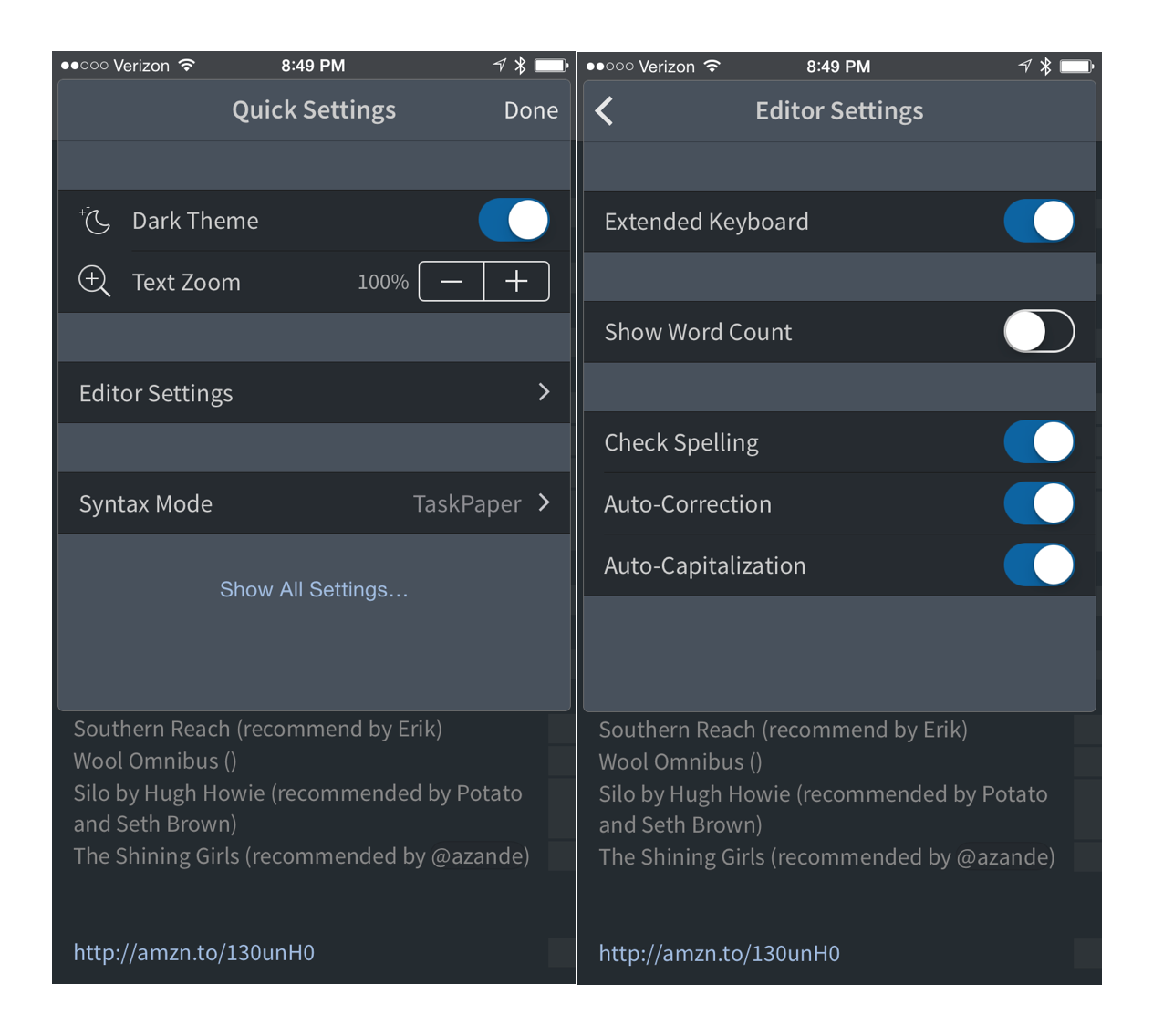 The obvious missing piece for this update are extensions. I'd love options for using Editorial as a general text extension. Apps like Workflow on iOS have really raised the bar. While I don't expect (or need) extensions for most apps, a text editor as powerful as Editorial would be a huge help.

I'd also love to see Editorial support additional document syncing options beyond Dropbox. I realize that's the de facto standard these days but I'd be thrilled to see a new trend. Amazon Cloud, WebDAV, SCP or even GitHub would be welcome as alternatives.

Editorial is irreplaceable to me. It's half of why I use my phone. It's a fantastic text editor, a superior task manager and a powerful scripting tool. Heck, it even has a terrific browser. Updates are not frequent but they are significant. Each iterations of Editorial feels almost like an entirely new application. As a beta tester of Editorial, it's gut wrenching when the version expires. I almost can't work.

Drawing a parallel to Drafts for iOS, Editorial is as simple or sophisticated as I want it to be. Without any customization it's a top tier text editor. With some elbow grease it's peerless.

Editorial doesn't replace Drafts for me. Drafts still provides that singular experience of opening the app to an empty page ready to write. Editorial is much more powerful and is where I keep things of substance and importance. Drafts is where I go when I don't know what I will need to do with some words. Editorial is where I go to work.