Unless you've been locked in a doomsday cult bunker you've probably noticed that the beloved iOS text editor and action app Drafts received a big update. The obvious part of the update is the redesign for iOS 8 and the new action creation process. The second most obvious thing is the iCloud based storage and syncing. But the real meat of this update is the extra keyboard row and the new JavaScript actions.

Drafts 4 supports standard JS but includes a few extra functions for working with the text window. Here's the list from the Drafts help:

This is where the fun begins.

I wouldn't classify myself as O.C.D. I like to think I'm more pedantic that anything else. When it comes to lists, sometimes it really bothers me when they're not in sort order. This is especially true of Markdown lists that are only keyed off the first list item.

Here's a keyboard script that scratches my lizard brain just right. It takes a list like this:

To add this to the extra keyboard row in Drafts 4, do this:

Notice that Drafts even helps validate the Javascript while writing. Pretty slick. 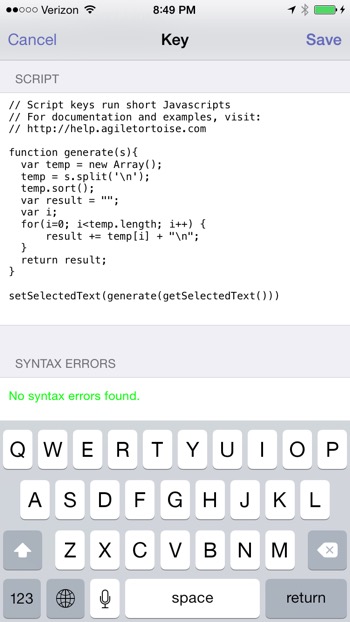 Speaking of pedantic, I like my timestamps and I like them in a specific format. When I create notes, I regularly insert timestamps at the beginning and in-between notes. This keyboard script makes it easy:

I use this all the time and it's terrific.