Disconnect.me to Cut Down Tracking and Improve Performance

Disconnect.me provides several privacy enhancing plugins for web browsers. The intent is less about ad blocking and more about cutting down on tracking. What I like about it is that it actually speeds up many crap-ware laden sites.1

Here’s an example using the Verge site, which is one of the worst offenders I’ve seen.2 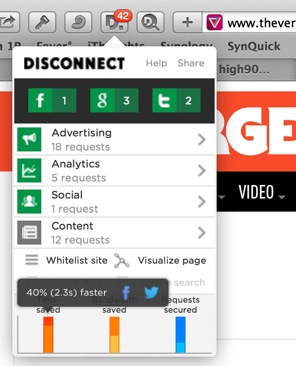 Disconnect.me reports that by blocking known tracking requests that the page loads 40% faster. It was noticeable.

The Safari plugin provides a nice interactive visualization of what’s happening when the page loads. Here’s what it reports for The Verge article: 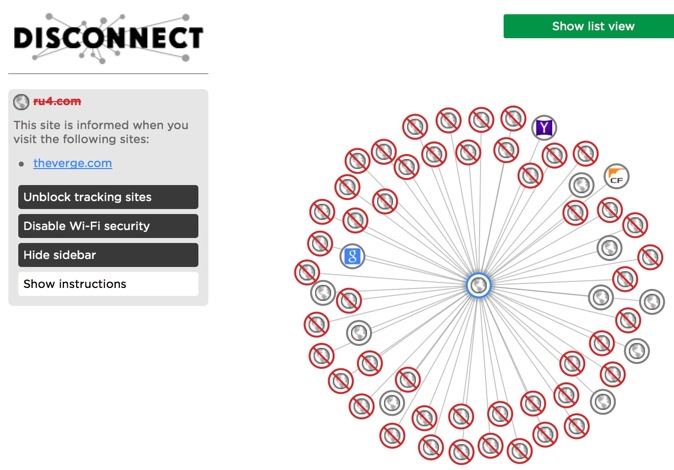 Here’s the list view showing what was blocked by Disconnect.me: 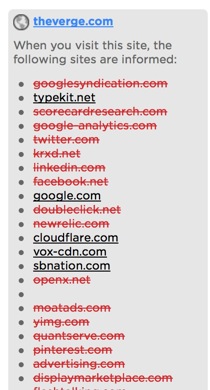 On the other hand, Arstechnica only sees a minor improvement, because they are loading a much smaller variety of crap. I can live with a 0.2 second lag to support a quality site. 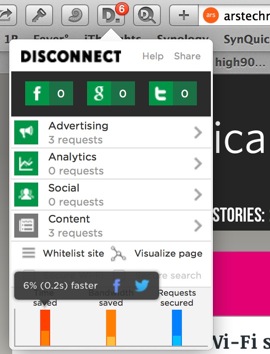 That's the other point of Disconnect.me that I like. There's an easily accessible toggle to whitelist the current site. That prevents anything from being blocked. Toggling causes a page refresh too.

The Disconnect.me mobile apps brings the same filtering and analysis to iOS. This is where the dollars meet the business model. You download the free iOS app which provides filtering of basic tracking services through the installation of a new iOS profile. The profile adds several new certificates and a new VPN setting. 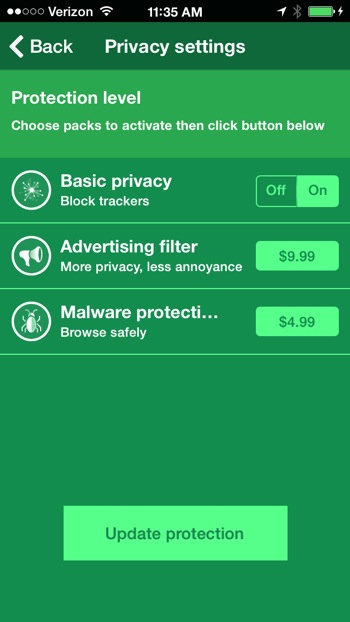 For a $10 IAP you get far more filtering and for another $5 you get "malware" protection. My assumption is that all of this filtering happens at their VPN. It's a clever way to reduce junk but I usually use iCab for that purpose. By doing it at the VPN, in theory, this would reduce the bandwidth used for browsing too. But it does sound like it would interfere with other VPN services.3

I don't think I'd use this service on iOS. But on the desktop browser I like to see what's happening. It's a nice reminder of how various sites value readers relative to their customers.