I've used and enjoyed two iPad keyboards in the past. The Logitech K760 and the traditional Apple Bluetooth keyboard. In both situations I found the Origami stand to be an excellent option for supporting the iPad while typing or reading.

When I find something that I like, I usually stick with it. However, as the Logitech K570 enticed me away from the Apple keyboard, so the Zagg Cover Keyboard convinced me to try something new. I'm glad I did. 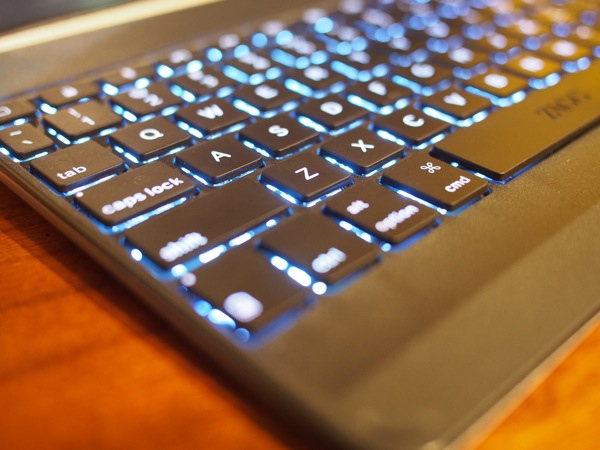 The Zagg keyboard is not a case but instead is a detachable front cover for the iPad Air. This has three immediate considerations. First, it does not protect the back or edges of the iPad. If you drop this combination then you have destroyed an iPad Air and the $85 Zagg Cover.

Second, the iPad Air with the Zagg cover still feels small. While it doubles the thickness and weight of the iPad Air, it's still a fairly small package and comparable to the previous generation of iPad. This is important, as many of the keyboard cases I've tried just felt too big and awkward.

Finally, the Zagg Cover Keyboard is easily detachable. I don't mean "easily" as in "it falls off", or that sometimes deceptive version of easy that requires tiny fingers of steel to remove an iPad from a case. The Zagg hinge is magnetic and rubber lined. The iPad Air aligns perfectly and with a gentle push, seats itself into the hinge. To remove the Air, just grab the two pieces and pull with the same force it would take to remove packaging tape from an Amazon shipment.

The iPad Air also fits equally well in a landscape or portrait orientation.

I fully charged the Zagg Cover when it arrived yet I was immediately disappointed by the short battery life. It was dead within a couple of days. However in subsequent uses, the battery life has steadily improved. My guess is that initially there were Bluetooth connection problems that taxed the keyboard's battery. Whatever the cause, the Zagg battery now lasts weeks without a recharge.

The rate of battery dissipation is important, because to fully charge the Zagg takes some time and I miss it when it's not connected to my iPad. It's also annoying to recharge with a micro USB connector.1

Recharging takes around four hours but there is no battery "memory" so you can recharge it any time for as little as needed to get you typing again.

With the Lights On

I have a lot of favorite features of the Zagg Cover but at the top of my list is the keyboard backlighting. The standard backlight is blue-white and comes with a keyboard function key to turn it off and adjust between the three intensity levels. The keyboard will also automatically turn the backlight off after a period of inactivity to save the battery life.

But one color is not enough for Zagg. Hold the backlight key down and press the right arrow key to cycle from white to blue, red, green or purple backlighting. And if the battery is too low, the Cover Keyboard will refuse to even activate the backlight to avoid wasting precious power needed for typing.

The backlighting is similar to a Macbook. The light glows around each key and through the characters. While the lighting does reduce the battery life, the Zagg has an aggressive timeout that turns the lighting off when not in use for about 30 seconds. Taping any key turns the light back on.

I purchased the black version and the backlighting is perfect. It's visible but not blinding in a dark room.

The Zagg Cover provides plenty of reasons to switch to an external keyboard for the iPad Air. It doesn't just replicate the virtual keyboard in a physical form, it provides several major convenience functions.

The extra keyboard row is narrow enough not to significantly change the other key positions but provides a variety of new powers for the keyboard.

The combination I use regularly is shift-arrow to select text and then the copy and paste keys. It's faster and far more accurate than the tap-and-drag of iOS.

There is also a key that I never use on purpose which toggles the international keyboard layout. It's right next to the space bar. I guess it's not terrible but certainly feels like a waste.

The most important thing about a keyboard, is how it feels while typing. The Zagg Cover Keyboard is comfortable to use and the keys feel similar to a Macbook but slightly cheaper.

The Zagg key spacing is just right. My typing speed on the Zagg is similar to a full sized keyboard with about the same error rate. That's the only measurement I care about. It speaks positively of the design. In a given day I will work on a CODE keyboard for roughly 8 hours and a rMBP keyboard for another two to three hours. The fact that I type just as well on the Zagg Cover says something great about the design.

The keys feel a little more like hollow plastic than a good quality keyboard, but this thing takes a beating. I type vigorously and hard. The Zagg Cover never feels like I'm going to break it.

Even when I'm not typing on the Zagg Cover, I still keep the iPad connected. The Zagg makes an excellent iPad stand. The incline is adjustable even if the hinge is not extremely rigid. I dislike the slight wobble of the hinge, but the iPad always ends up resting at the incline I set. It doesn't slowly drift one direction or another. 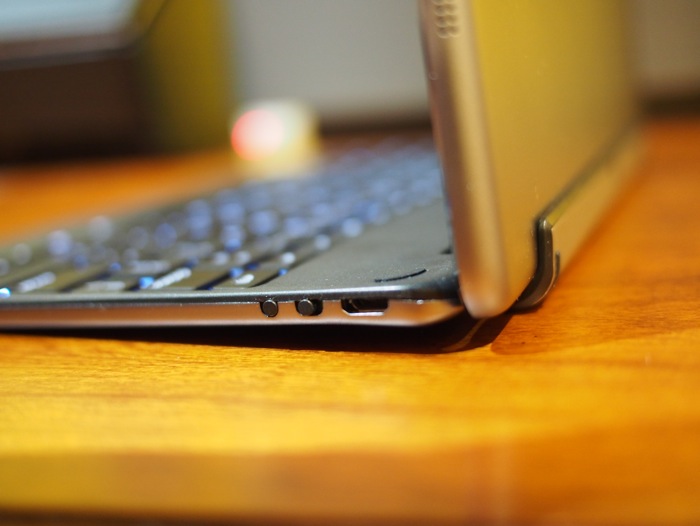 I use the Zagg Cover Keyboard during FaceTime calls, because it is such a good stand. It holds the iPad in place without blocking any part of the camera (front or back).

There are some less than ideal parts to the Zagg Cover. While you can type in your unlock code for iOS using the Zagg Keyboard, several times it did not unlock the iPad. It's about a 70% success rate for me.

The hinge covers most of the bezel right up to the bottom edge of the screen. This makes the ridiculous slide from bottom of iOS7 difficult at times. It's more proof that the gesture is poorly considered since it requires swiping from the very edge of the display.

The cover faces the table you set it on, like the bottom of a laptop. Zagg provides rubber feet to stick on to the cover to provide stability when on hard surfaces. However, the rubber feet stayed attached approximately a week before falling off and leaving glue residue on the Zagg Keyboard. I would have preferred a rubberized coating on the Zagg or a slightly different design to make it more stable on a flat surface.

I really like the Zagg Cover Keyboard. It has excellent build quality and a lot of great features that make it worth the $85 price tag. The best recommendation I can make is that I really prefer to use my iPad Air with the Zagg Keyboard attached. I've actually waited for it to charge just to use it on my couch. That's weird but true.