The fingerprint reader built in to the iPhone 5s is not as fast as I expected. It’s not instant as some have suggested but rather requires a slightly longer press than I would typically use. With the screen off, I typically give a quick press to turn it on. This is not sufficient to unlock the phone. I found that to unlock the phone I had to hold my finger on the button until the screen display became active. Not so much as to activate Siri, but just a bit more than a quick tap.

The iPhone 5s allows you to store scans for several fingers. By saving scans for the same finger but holding the phone with a slightly different grip, I increased recognition speed and accuracy.1 I’ve done this for both of my thumbs. It’s rare that I would use a different finger to unlock my phone.

I didn’t bother saving scans for my wife’s fingers. She knows my pin.2 You can unlock the phone with a pin at any time. The fingerprint scanner is purely a convenience function. For people that already use a pin, this will make it easier than entering 4 digits. For those that don’t, now there’s one less reason to not use some basic security measure. 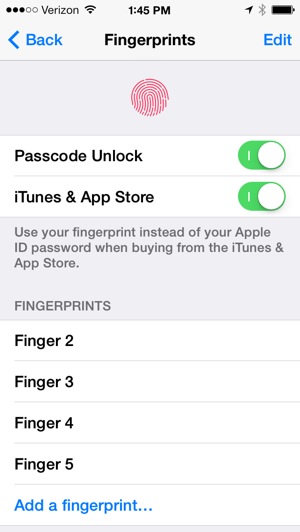 You will still enter your iCloud password regularly. This is especially true when setting up a new phone. But you can at least set up the fingerprint scanner to authorize purchases.

I’m not a fan of the thin-light font used throughout iOS7. There are a couple of options to increase readability but not without impacting layout. The font size can be increased in the Settings -> General -> Text Size setting. This works well.

You can also make all system text bold, which I prefer. This is in the Settings -> General -> Accessibility setting. Bold text creates problems though. Some apps, Downcast for example, have text-wrapping hiccups. This may be caused by the newness of working with layouts in iOS7 but it still surprised me. 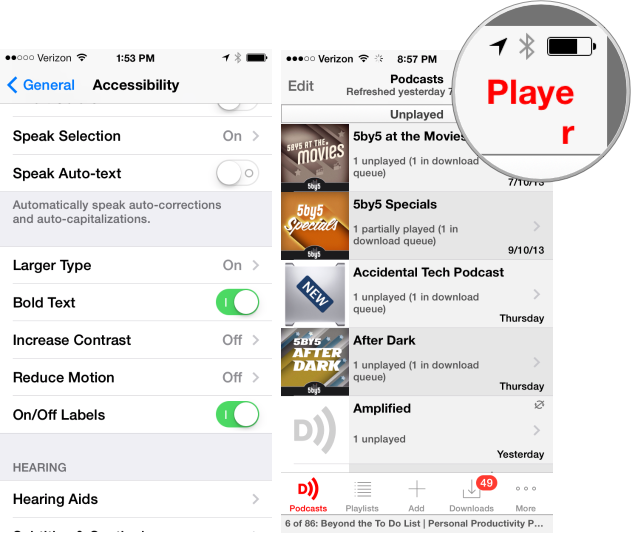 I also enabled the On/Off labels in iOS7 since some apps provide poor feedback with muted colors. Considering an On/Off toggle may be the difference between data syncing and data loss, I don’t want to take any chances.

The iPhone 5s is fast, but so was the iPhone 5. So was the iPhone 4s before that. I’ve noticed that transitions from the multitasking display are slightly smoother on the 5s. Switching between apps is also seamless on the 5s, whereas my iPhone 5 had a slight stutter.

It might be my imagination, but Siri also recognizes my commands faster on the 5s. Perhaps this has nothing to do with hardware acceleration. It is possible that Apple can tweak priority on the server side response in favor of their new flagship phone. I’ll take what I can get.3

The iPhone 5s is perceptively faster than previous models but I wouldn’t buy it just for the speed boost but I’m happy to have it now and will certainly be happier 6 months from now.

I also purchased the black leather case from Apple. It is thin and light. It replaces my Ringke Slim case ($7 on Amazon) but doesn’t add much additional thickness to the phone. I really only use a case to increase friction on the phone. I don’t like how slippery the iPhone is and I often rest it on my thigh during a meeting.4

My biggest disappointment with the Apple leather case is that the buttons feel mushy with the case on. There are no cutouts for the volume and power buttons so you are actually required to deform the leather to push the button. There’s enough resistance that the satisfying button click is eliminated by the case.

The camera is a huge selling point of the iPhone 5s. The photos are noticeably better over the iPhone 5. They are not as good as a real camera but they are good enough. I come from the 70’s and most of my family photos are Polaroids that look just as crappy as everyone applying filters today, except my parents didn’t have a choice. The iPhone 5s camera is vastly superior to every camera my parents ever used.

Getting Ready for the Upgrade

Here’s my recommendation: Backup to your Mac if you can. Sit down, plug in a cable and watch it backup. That’s the safest option. Restoring to the new iPhone takes less time and if you use an encrypted backup, all of your passwords will remain intact.

At the very least use an iCloud backup. You will need to log back into all of your accounts across every app after restoring from an iCloud backup, but at least you don’t have to reinstall every application manually. An iCloud restore will still take quite awhile. Have a beverage.

I like the 5s but there is only one reason to recommend an iPhone 5 owner to upgrade: They use their iPhone as their primary camera. In that case, a few hundred dollars gets you a better camera that also comes with a nicer iPhone.