I’ve been a committed Pandora premium subscriber for around 4 years. There’s been nothing better than Pandora for pure music discovery.1 I don’t mind buying music I like but I use Pandora to find music I don’t know I like. It was because of my continued enjoyment of Pandora that I was skeptical of Apple’s new iTunes Radio. But Apple is not offering a cheap knock-off of Pandora. They are offering an upgrade. 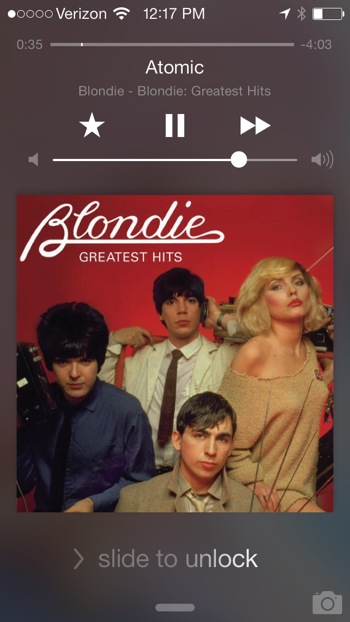 What iTunes Radio is Not

iTunes Radio is not Spotify or Rdio. While you can create a station based on a genre, band or song, you do not explicitly choose tracks to play or build a playlist. But, like Spotify and Rdio, you have access to stream a large collection of music that you may not own.

From my experience, iTunes Radio has an enormous collection of music with most of the major record labels available, including such traditional hold outs like AC/DC, Metallica and The Beatles. More on this latter.

iTunes Radio is not a social network. There’s no Ping cruft rolled into iTunes Radio. You can share a station you create but you can not share an individual song or artist.

iTunes Radio is not Internet radio. This isn’t a stream of KROQ or WCBS. There are no DJ’s or periodic announcements. There are also no ads if you are an iTunes Match subscriber.2 Well, other than the music itself.

iTunes Radio is not much different from Pandora. I built stations based on genres, bands, albums and songs. Those stations consisted of similar songs and streamed continuously for as long as my iPhone had power. That’s pretty much what Pandora does too. However, iTunes Radio was a better experience.

I have no direct knowledge about how iTunes Radio or Pandora recommendation logic works, but I do know that only iTunes Radio can access to my music collection and my personal ratings on those tracks. I suspect that Apple is leveraging this additional information, combined with a massive amount of data from millions of other iTunes users, to provide a higher quality mix of music. It also pulls tracks from my collection that appear to be unavailable for creating stations. It makes me wonder if this is a run around any gaps in their streaming rights with record labels. If I have it already, it can show up in a station but it can not be used to create a station.

One feature I like in iTunes Radio is the ability to “Tune” a station to change the distribution of songs. Each station defaults to a “Hits” mode which appears to provide more historically popular tracks for more well known artists. However there is a modest amount of control available by choosing between two other modes, “Variety” and “Discovery”. 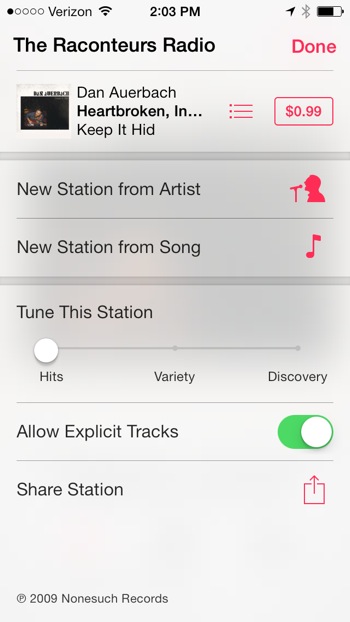 I preferred the “Discovery” mode for genres I was already well acquainted with. iTunes Radio provided a much richer mix of bands and songs, many of which were a pleasant surprise.

I preferred the “Hits” mode for stations composed of music slightly outside of my mainstays. For example, here’s what I got with the Back in Black station: 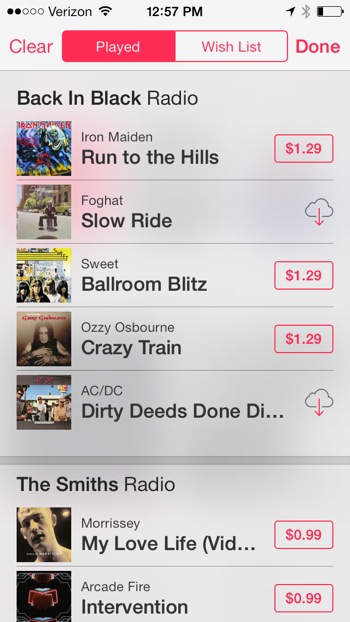 That list looks a bit odd, but you know what? That’s a pretty solid mix of similar music but it also has terrific variety. My experience with other iTunes Radio stations was about the same. I only made slight nudges to the collections through the “Play More Like This” toggle.

But there are some oddities with station creation. Some artists and albums are missing. For example, the new Nine Inch Nails album is not available for creating a station, even though I own the album and purchased it from iTunes. However, many other NIN albums were suggested for stations. I’m not sure of the reasons but it felt more like an anomaly than the rule. It also matched my experience on Pandora. 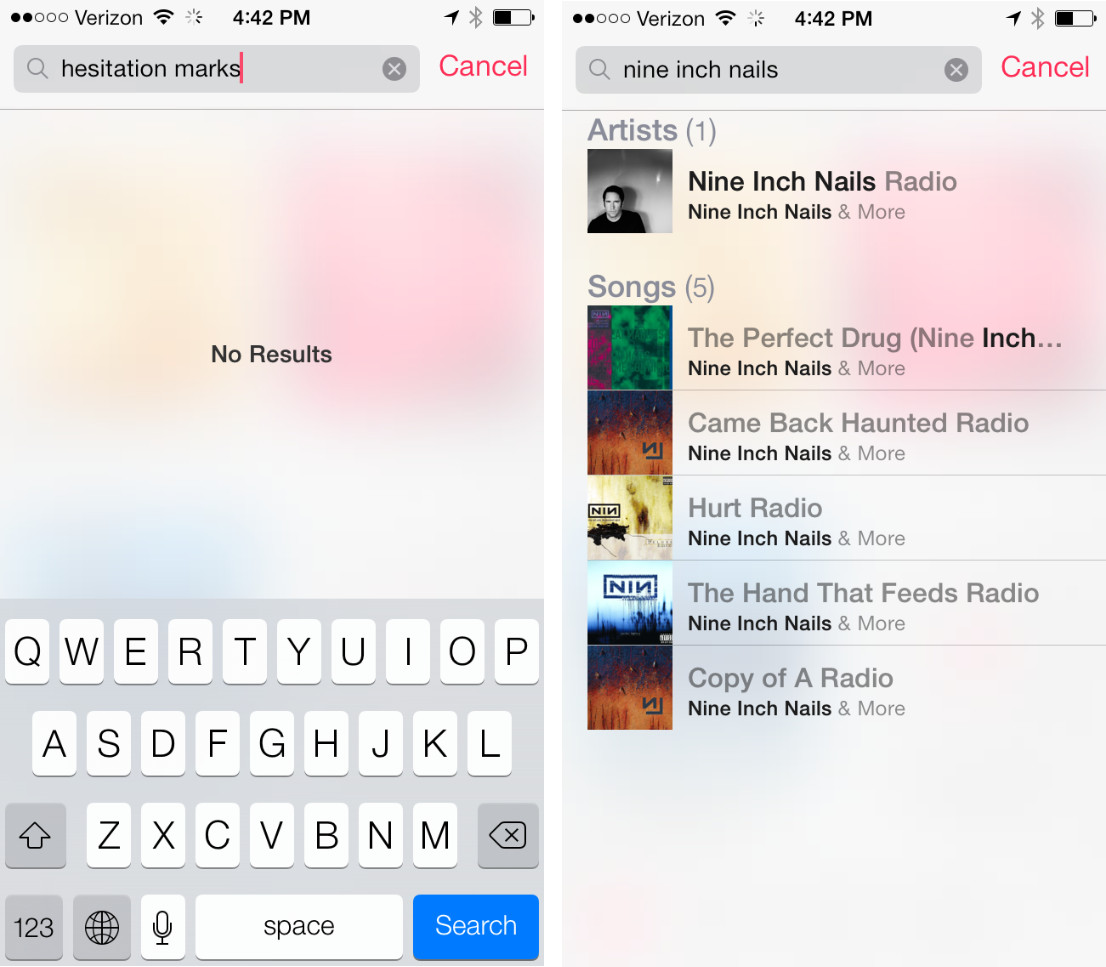 iTunes Radio is not a separate app. It’s right there in the Music app along with playlists and artist views. It feels like a foretelling of the future. A future where we own music but it exists entirely outside of our devices. A state where the songs we own and the songs we borrow are indistinguishable. But right now there are still subtle indications of the separation.

The player is a hybrid of the Music app and the iTunes Store app. The primary interface is a basic player with a few track controls and prominently positioned purchasing buttons. In fact, Apple makes it easy to dig into the entire album and purchase any combination of tracks without leaving the Music app. Just tap the little info button at the top of the player and then the list icon to display the iTunes Store listing. 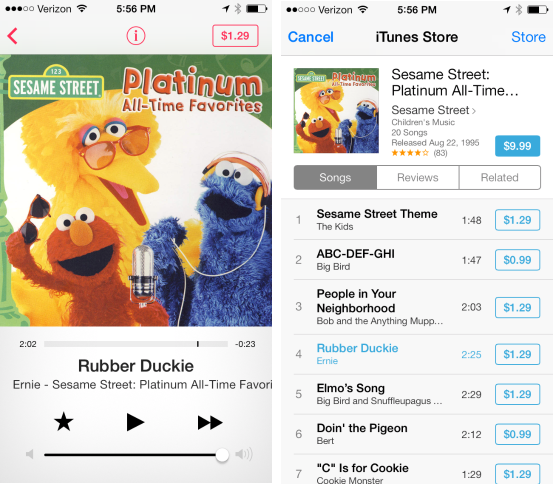 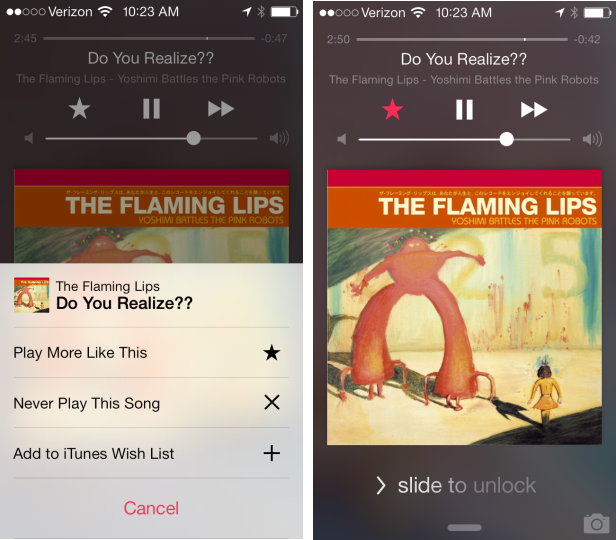 This is a really great advantage over Pandora and something only Apple can do right now. I particularly appreciate the ability to add a track to my wish list in iTunes. I don’t usually use this feature in iTunes. I either buy it when I hear it or I don’t. But who wants to hassle with multiple taps and passwords to buy a song from the lock screen? There’s no need for it. Just add it to the wish list and but it later.

Like I mentioned earlier, there is no Ping-like social network in iTunes Radio. You don’t follow people and you don’t contribute to a social graph. You listen to music.

But there are some rather nice ways to share what you like with people or even yourself. Hidden behind the track info icon, along with the station tuning controls, there is a sharing panel. But I found it odd that there is really only one thing available to share, the current station. 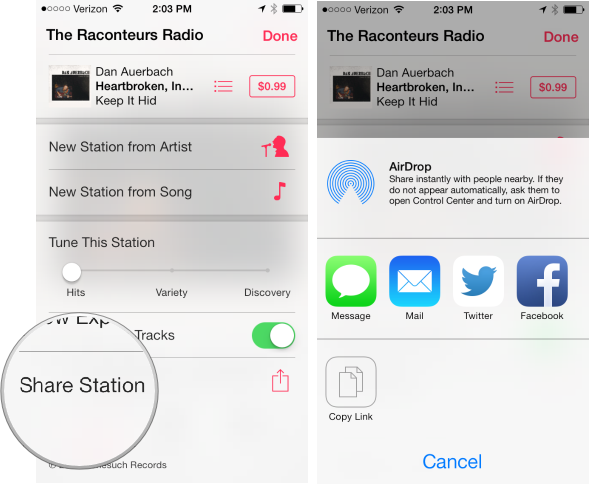 Click the link on an iOS7 device and you can add the station to your own collection.3 That’s simple enough, but if you follow the link on a Mac, you get a web page with some artwork and nothing else.4

It’s a bit of disappointment that there is no option to directly share a song or album but I have hope that this is just the beginning of sharing options in iTunes Radio.

Here are some stations to get you started:

But if sharing with others isn’t your thing, iTunes Radio makes keeping track of music pretty easy too. Tapping on the History text5 displays two options, the history of played tracks grouped by station and the wish list. 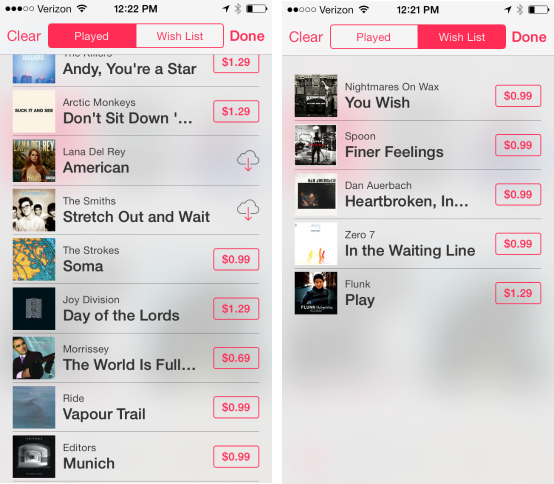 And of course there are plenty of options to buy tracks too while browsing the history. This list cost me a few dollars but I wish there were more options available for each track, such as playing the complete song or transferring a song from the History to the Wish List.

There are still many missing pieces and odd choices in iTunes Radio. For example, there’s no artist info or lyrics available. There’s also no way to get back to a previous track to listen again. I also found the display of station stacks a bit confusing. There’s a visual cue that you may be able to flick through a stack of tracks to see what’s in a station, but this is just a mirage. There’s nothing there.

I did like the mechanisms for creating and editing stations. There’s a single search box (similar to Pandora) to enter key words. iTunes Radio provides several options for creating a new station from the results. Once created, stations can be reordered or deleted from the “Edit” view.6 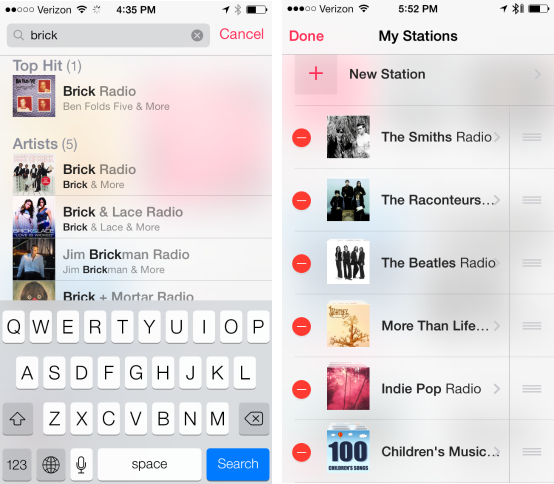 One last little feature of iTunes Radio that no other app will get, is Siri access. Just ask Siri what’s playing, regardless of whether it’s on the radio or not, and she’ll tell you. 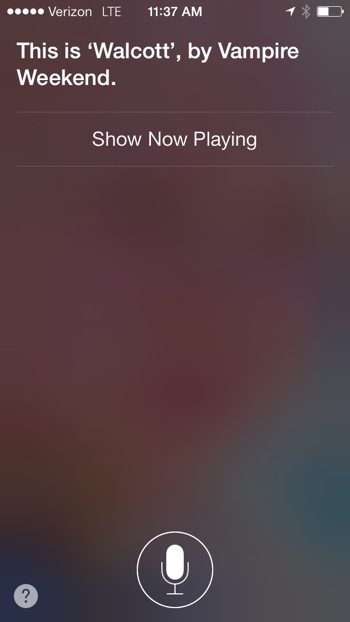 I’ve loved Pandora for years. I’ve purchased premium memberships for people and I’ve convinced many more to buy themselves one. But there are rough times ahead for Pandora.

iTunes Radio is superb. Because the algorithms have access to my iTunes collection and ratings, it provides a much greater variety of music. There was not one repeated track in the many, many hours I used it. I can’t even say that for Pandora in a single day.

But the real selling point for me was the much greater discovery available in iTunes Radio.7 I was often pleasantly surprised by the tracks offered by iTunes Radio and I followed those rat holes into some great new-to-me artists. A good measurement was the number of times I was compelled to pull my phone out just to find out what great artist iTunes just introduced me to. That’s what I want from radio. I want surprises that pay off.