What's that sound? It's the sound of thousands of text-nerds squealing with delight as they open their freshly updated Drafts app for iOS.1 In case you are one of the uninitiated, Drafts is a sausage grinder of text. Words go in and beautiful processed products come out the other end. Ok, this metaphor is falling apart. Let's move on.

So what's the big deal about this update? Drafts made it to my home screen long ago. Why care about another update?

Drafts 3 is a significant improvement in both functionality and experience. It's not just about adding a couple of new actions. Sure, there are some great new actions, but v3 is about making the process of getting in and out easier. It's also about getting the right text to the right place.2

My favorite new feature in Drafts 3 is the addition of action groups. They are represented as small tabs and it makes getting to my actions much easier. Rather than scrolling through a huge list, I just know that my most commonly used Dropbox actions are on tab 2. 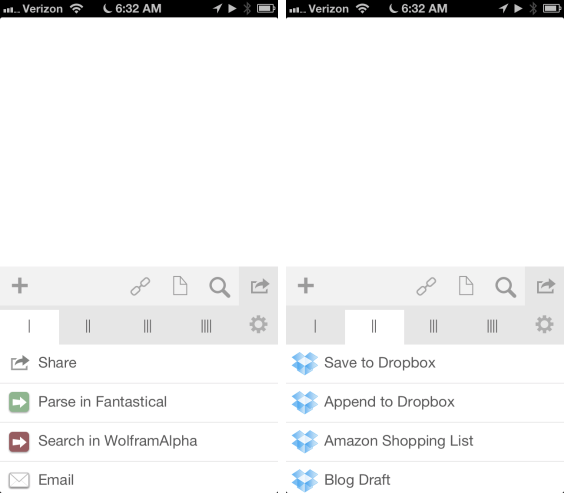 In addition to tabs, Drafts 3 also adds a full screen list option. Tapping on the action button can now fill the iPhone screen with the list of actions instead of limiting the list to the lower half of the screen. This helps with quick access to a large collection of actions. There is also a "hidden" group for stashing actions that I'm still working on or no longer need but don't want to delete.

Speaking of large collections, you know what was a pain before Drafts 3? Keeping my actions in sync between my iPhone and iPad. Now it's as easy as backup and restore.

Drafts 3 provides an option to backup all actions. I assume this is done on the Simperium service. The process is a simple. Restoring is also simple. Each backup is identified with a time stamp and device. 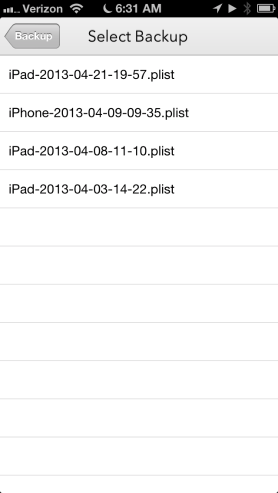 Backups are a great feature for an app like Drafts. It can be fiddly to configure URL actions or document templates. Losing any of that would be depressing. I would like the option to backup to Dropbox, so I can squirrel them away on my Mac as well. I still worry about Simperium going tits-up.

I use Siri and dictation with Drafts all of the time. Try this: activate Siri and say "Launch Drafts". Now hit the dictate button and start speaking your masterpiece. Choose an action to do something with the words. That's it. If your phone isn't passcode locked, this is a great way to send off little ideas or pieces of data to any number of places right from your lock screen. Sure, you kind of look like a freak while doing it, but screw those critics.

For example, this template creates a draft blog post in my Dropbox/nvALT notes folder. I just type a post title and a few draft sentences to get the idea down. Drafts does the rest when I execute the action. Drafts expands pdate to 2013-04-24 07:02:00 in both the file name and the post header in the background when the action is kicked off. 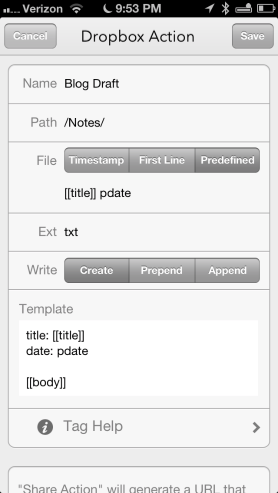 Drafts 3 for iPhone also received an enhanced keyboard. Sliding the action row above the keyboard left or right reveals extra keys for writing and navigating. I really like that the extra keys wrap around. I don't need to remember which direction to swipe. 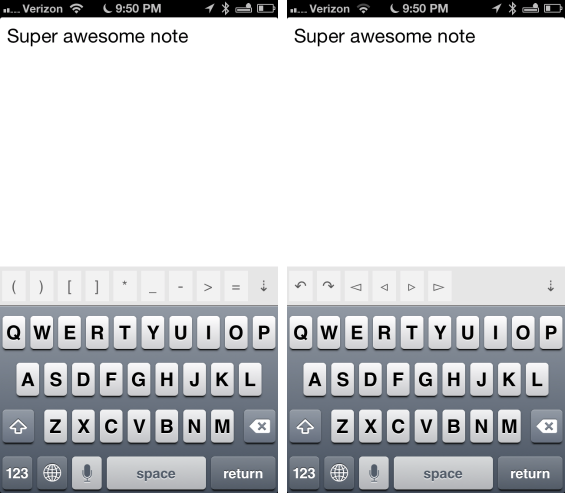 There are three extra keyboard rows:

The dashed down arrow on the right of each row, closes the character viewer and the action buttons return. There's also a bit of gyroscope detection here. After swiping to an extra keyboard row, simply tilt the phone to get back to the action buttons. After all, Drafts is all about the actions.

There's a lot more about Drafts 3 that I like and I'm sure others will do justice to those features. Here's just a brief rundown of what else is awesome in Drafts:

I think the Evernote actions are great. I'm not a big Evernote user but I use these actions and they are much faster than opening Evernote.

The new clipboard placeholder for templates, [[clipboard]] is very cool.

If you actually store and manage your notes in Drafts, it's a lot easier in v3 with the new Archive and Pinned notes groups.

Actions can now be configured so that upon completion they delete, archive or do nothing with the original note. This can be set on a per-action basis.

There are some really great Reminders integrations. Drafts can pull from Reminders or post to Reminders. There's even a new action to take a Drafts note and convert the lines to a new Reminders list.

Drafts has reached a level that makes it hard for me to even think about the future. It's fast. It's reasonably attractive. It's highly functional. But there is room for improvement.3

I just don't trust Simperium after months of dealing with magically dissapearing data in Simplenote. I'd prefer a Dropbox syncing option. This is no secret to Greg and I appreciate that it is technically challenging. Not having access to all of my Dropbox notes in Drafts means it is really just bus stop for words. I only go there to get somewhere else.

It would be helpful if I could name action backups. Greg points out that backups could be used for saving different action sets. That would really only be possible if I could mark backups by name.

Seriously, go get Drafts if you do anything with words. I'm betting most people reading this conclusion like words. You just read a lot of them about an app. You would love Drafts v3.