Agile Tortoise just updated Drafts for iPhone and also launched Drafts for iPad.1 I really like and use both versions. It's the quickest way to get a bunch of notes down. The iPad version feels roomy and comfortable. I especially like the low contrast extra keyboard row. Too many apps make the text window smaller by adding an extra row. Drafts doesn't feel smaller.

There are also a good number of new actions available such as "Send to Day One" and "Append to Dropbox". 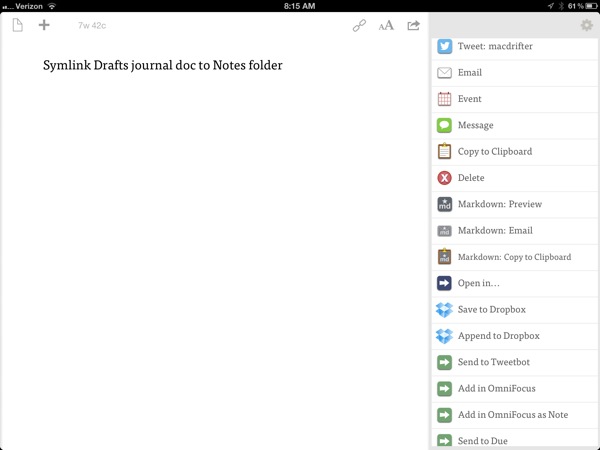 The append function is great. I still have a specific workflow that I'm trying to achieve, so this trick is still necessary. My fingers are crossed that Agile Tortoise will provide a more general solution but I think I'm an edge case.2

Drafts is like LaunchCenter Pro for ideas and information. If I just want to quickly enter some text without waiting for the app to launch and load, Drafts nails it. I open the app and immediately start typing. I then just need two taps to do almost anything with it. I also use it to rapidly take down a bunch of small notes and return later to process them into something more meaningful.

I use Drafts like scrap paper. For example, if I want to do a web search but I don't have time now, I create a Drafts entry with the search terms. Later I open the scrap and send it to Bang On. There's no copy and paste and no retyping. Just doing.

Drafts can send a note to Dropbox but it does not use Dropbox for its note storage.3 This is both good and bad. It's good because Drafts sync is very fast between devices. It's bad because my Drafts notes don't end up with all of my other Dropbox notes. I suspect that is by design.

Drafts is using Simperium to sync across devices. As I've said before, I think the concept behind Simperium is amazing. Drafts is the first app I have used that takes advantage of the lightening fast sync Simperium offers.4 Within one second of typing a note on my iPhone, the note appears on my iPad. There's no obvious indication of sync, because it's not necessary.

UPDATE: The offer has ended. That was quick.

I was given an early peek at Drafts for iPad, which means I got it for free from a really generous and hard-working developer. I'd still like to give him my $3. So here's the deal:

The first person to email me will get a free copy of Drafts for iPad from me. Hopefully the winner will find as much use for Drafts as I do.

Drafts is on my home screen.